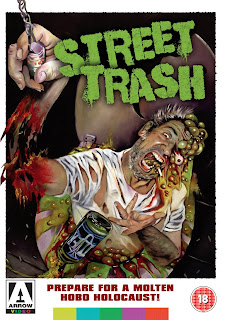 A dodgy liquor store owner flogs bottles of out of date ‘Viper’ at discount rate to the local homeless community, unaware of its true properties: it causes its consumers to melt. Very graphically. Fred and his brother Kevin, two young derelicts, find themselves up against the effects of the toxic brew, as well as having to contend with the junkyard overlord Bronson, an unhinged war vet…

When a film opens with a slapstick chase scene in which a tramp steals liquor and money from various people only for them all to give chase, full frontal nudity, fart gags, a man falling out of his wheelchair and some completely random and absurd violence in which a man sitting in his car is hauled out of it by a hulking shell-shocked miscreant and hurled through his own windshield, much to the shock and dismay of his fellow passenger – you just know you’re in for an utterly depraved splurge of a treat. Dearest reader, may I present to you the gloriously perverted and truly outrageous schlock-fest Wes Craven once said made John Waters look like Mary Poppins: Street Trash! Leave your decency and moral outrage at the door, thanks.

Street Trash is the kind of film that contains a few moments (in fact it could be said the film is purely made up of these moments!) that may very well make you question what has become of your life, as you sit on your couch on a Friday afternoon watching a character dissolve into a toilet in splashes of lurid viscera after he chugs some out-of-date booze. Or indeed the scene in which an unfortunate tramp has his penis lobbed off and tossed around the junkyard by his fellow vagrants as he desperately tries to retrieve it. Such moments come thick and fast in Street Trash. And yet the film still possesses a certain sick charm. The bad taste is so over the top and deliberately offensive, one can’t help but smile – even if you are a little appalled. It’s all part of the morbid fun to be had whilst indulging in Street Trash. 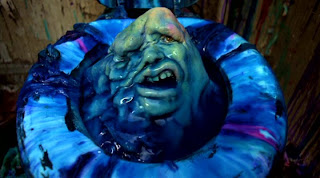 Director Muro somehow manages to constantly surprise though, with striking and effectively gaudy visuals and his and Roy Frumkes’ witty script consistently upping the perverse humour and absurd situations to gob-dropping heights. Basically, just when you think it can’t get any trashier, irreverent, grimier, sleazier or more disturbing: it does. While obviously shot on a shoestring budget, Muro also proves evidently capable of creating a memorable look and he even finds time to perform some impressive Evil Dead-like camera gymnastics, particularly in the scene in which the tramp dissolves into the toilet (!) and a steadicam rushes through a derelict wasteland, through rubble, around ruins and over debris to screech to a halt on the toilet in which the unfortunate hobo has just melted, before cautiously advancing towards it to have a closer inspection and reveal the psychedelically coloured splurge that lurks within it. Twisted doesn’t even begin to describe it. Truly outrageous. The production design is also worth mentioning – Robert Marcucci creates a lurid world that falls somewhere between Abel Ferrara’s squalid urban visions of Eighties New York and the post-apocalyptic dystopian world of Mad Max. At times the film also looks like a day-glo paint bomb has exploded in the special effects department of Troma. 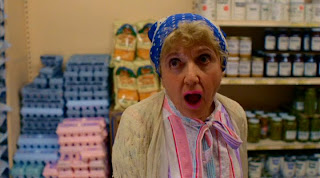 The story just meanders along like a drunken bum shuffling down the street towards you – while you can see what’s coming, there is still the potential for anything to happen. The story exists to hold together a series of increasingly bizarre and perverse scenes of gory mayhem. Events occur that feel like they were just chucked into the mix to prolong the running time, and though Street Trash is not a film one could ever describe as boring, there are a number of moments that test one's patience. Only a little though. And other moments that are just completely wayward and bizarre such as the scene that presents what can only be described as ‘opportunistic necrophilia.’ I kid thee not.

The surprisingly witty script contains a dark and weird Vietnam War subtext. A number of references are made to the war before we are plunged into a bizarre, and really quite stunning looking (no, seriously!) flashback of Bronson, as he surveys his dying and bloodied comrades. A creepy scene in the junkyard after dark unfolds as the camera skulks amidst the filth and squalor and peers at the human forms lying amongst it, ranting about atrocities they’ve seen in the Vietnam war. For a brief moment a real sense of sympathy and worrying pathos is evoked for these people who have been forgotten by an uncaring society before we move back into trashiness and boob shots. Another scene that feels a little out of place, simply because it is genuinely upsetting is the scene in which the ‘Drunken Wench’ is dragged kicking and screaming out of Fred’s shack by the junkyard vagrants. Her ravaged body shows up in the next scene. Not funny. Again, the film highlights the plight of the homeless community, populated as it is by vulnerable people, preyed upon by those with a shocking lack of regard for human life. 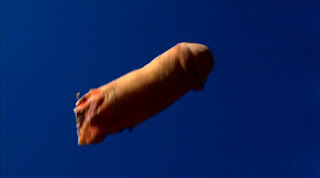 Much of the script was apparently improvised and the energy between the actors is infectious. Some of the actors were apparently from stage backgrounds and it comes across in a few performances, particularly Nicole Potter as Winette, as she gurns and slurs her way through events. She is at once ridiculous, tragic and sympathetic. Bill Chepil is also quite memorable as Bill the Cop, a hulking brute with the law on his side.

Energetic, grimly exuberant and no-nonsense trash – Street Trash revels in its own squalid perversity and fans of early Raimi, Romero and Craven might just find that they get a kick out of this surprisingly well put together and technically impressive grime-fest. Gory, graphic, exploitative sleaze, low budget, anti-establishment and morbidly funny – this won’t be to everyone’s taste – but those who have an inkling of what they’re letting themselves in for - and are ok with that – will be in for a sick treat.

A special two-disc edition of STREET TRASH (cert. 18) will be released on DVD (£15.99) by Arrow Video on 11th January 2010. Special Features include: "The Meltdown Memoirs" feature and a UK exclusive interview with Jane Arakawa (Wendy).

senski said…
Oh, that severed penis in flight shot is just itchin' to be used as a screen background, isn't it? That is, if I can manage to look at it without crossing my legs...
6 January 2010 at 03:05

I Like Horror Movies said…
I was blown away the first time I saw ST, there really is nothing else like it lol..