Classic ‘Behind the Couch’ Moments #101: Dr Who and the Daleks

As you may or may not be aware, this blog takes its name from a phrase in popular culture that apparently originated from commentary on Doctor Who – namely the actions taken by young children being frightened by episodes of the show - particularly during the 1970s. According to Sam Leith, who wrote an article titled ‘Worshipping Doctor Who from behind the sofa’, the cliché that Doctor Who had us ‘hiding behind the couch’ whilst watching it – ‘is more telling in its tone than its questionable factuality. It connotes nostalgia and a pleasurable mixture of fright and fascination - but above all it connotes domesticity. It united fear and soft furnishings in the British mind.’

Apparently The Economist actually went so far as to present this notion of "hiding behind the sofa whenever the Daleks appear" as a British cultural institution on an equal par with Bovril and ‘tea-time’. Indeed, the phrase is so strongly associated with Doctor Who in the UK, that in 1991 the Museum of the Moving Image in London named their exhibition celebrating Doctor Who "Behind the Sofa". As the first ‘Classic Behind the Couch Moment’ to be posted on this blog, it seemed only fitting I turn to the show that spawned the turn of phrase the blog takes its name from. And what key moment within the entire history of Doctor Who is more fitting to select than that of the Doc’s main source of conflict and one of the show’s main providers of iconic imagery – the Daleks…

The Daleks are alien organisms from the planet Skaro. They dwell within tank-like mechanical casings and despite not being able to manoeuvre stairs, they became a powerful force intent on universal conquest and destroying, nay, EXTERMINATING anything and everything that stood in their way. They were the Doctor’s main nemeses. The Daleks had every emotion mechanically removed except hate; leaving them with a desire to purge the universe of all non-Dalek life. The reason they were perhaps so disturbing for young viewers was their distinct lack of reasoning or empathy. Appearing on screen for the first time in The Dalek Invasion of Earth and subsequently sending the younger viewers of the show, and some of the older ones too I’ll bet, scurrying behind the couch, the Daleks became a main staple of the show and continue to appear in it even today.

Doctor Who is one of those shows that are remembered for its moments that induce not only a palpable dread but also inspire a loving nostalgia – the two often combine to create a potent effect. Indeed, the idea of being scared is linked in with notions of growing up and rites of passage. Child psychologist Bruno Bettelheim remarked on this notion of being scared by certain things as a child when he said 'As children, we need monsters to instruct us in the ways of the world.' Images of bizarre alien races and hideous beasts were broadcast directly into our living rooms as we ate dinner on a Saturday evening thanks to Doctor Who. Back in those days, most families probably only had one TV and everyone would have gathered around it – it was a ‘family experience.’ Nostalgia mixed with memories of feeling spine-tingling dread whilst trying to eat your fish fingers and chips for many people, myself included, all stems back to Doctor Who… 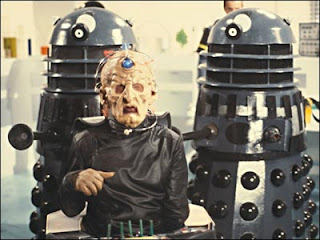 Being scared in the safe environment of one’s own home adds to the nostalgic experience – safe fear in a domestic setting.
I myself recall being frightened when watching Doctor Who as a youngster. As you can see from the photo below, I had a rather close encounter with a Dalek that, at the time, proved to be an experience with which I wasn’t particularly enamoured. I recall much screaming and crying and kicking and generally not being very cooperative, to the point where the person inside the Dalek felt so bad he actually climbed out of it to apologise for scaring me. For some reason this, far from abating my fear of Daleks and shattering the illusion that they were real, still filled me with an unnamed dread and prompted my parents to recognise a wonderful Kodak moment I will forever be thankful for...

Matthew Coniam said…
City of Death, for me, and the moment - which I now realise is utterly ludicrous but which at the time had me completely - when Julian Glover pulls his rubber face off to reveal the green, one-eyed, seaweedy thing underneath.
Used to love Dr Who - wish it had never come back...
31 January 2010 at 18:17

Anonymous said…
This post is nothing short of amazing.
First off, that picture is sublime!
I also love the history. I haven't seem much in the way of the original Dr. Who (even though I am obsessed with the new ones), so I love reading about its initial reception and how steeped in the culture it became.
Thanks for sharing!!
3 February 2010 at 18:47

James Gracey said…
Thanks Christine. That photo probably captured my finest moment - though I wouldn't have thought that at the time... ;o)
4 February 2010 at 10:44

Lysergic Earwax said…
The thing that really freaked me out as a kid was the Master's "Tissue Compression Eliminator" device which shrank the victim to a tiny doll-like corpse. Still makes me shudder. Used very effectivly in the classic Logopolis story.

Really enjoying the new Matt Smith incarnation by the way. Seems to me much closer to the classic series in style and feel than the RTD years.
17 May 2010 at 11:36