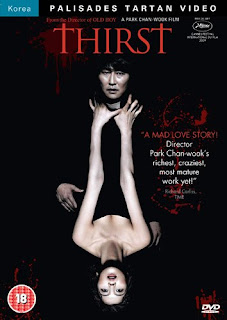 Father Sang-hyun (Kang-ho Song) selflessly volunteers for some highly dangerous medical experiments to develop a vaccine to eradicate a deadly virus. He contracts the disease and seemingly dies, only to return to life and be regarded as a Messiah. He soon discovers to his horror that his immunity comes at a price: he now has a taste for blood, and all those human urges he suppressed throughout his life in the priesthood have become too strong to resist. He becomes locked in a bizarre and destructive relationship with Tae-joo (Ok-bin Kim), the wife of an old friend, and the two plummet headlong into a darkly erotic world soaked in the blood of all who cross their paths…

The vampire film has proved to be one of the most versatile, adaptable and popular sub-genres with filmmakers and audiences alike. It appears to be one of those types of film that lends itself so well to reinterpretation whilst maintaining a hardcore of themes and ideas that seem timeless in their appeal and accessibility. Of course, the risk with this is that an abundance of vampire-themed films can render the concept dryer than an (please pardon the dreadful and extremely obvious forthcoming pun) exsanguinated cadaver, bereft of originality and without anything fresh to say.
The recent spate of vampire movies have ranged from the utterly sublime (Let the Right One In) and the provocative (True Blood) to the docile (Twilight) and the downright lame (Daybreakers). Korean director Park Chan-wook’s take on the genre is as quirky, violent and surprising as you’d expect from the director who gave us Oldboy and Sympathy for Lady Vengeance. 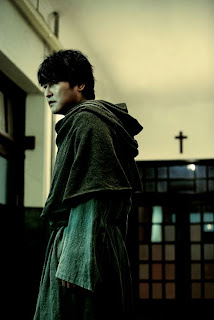 The film, naturally enough, abounds with shocking images that practically spill out of the screen and into your lap; from the sight of Sang-hyun interrupted from playing his bamboo flute when he begins to violently cough blood – the blood fills his instrument and flows out of the finger holes – to the sight of Tae-joo spewing yet more claret all over a bright white floor. A wonderfully Lynchian moment occurs when a doctor is called to look at Tae-joo. He enters the living room to find her reclining on the couch, the shock of red blood sprayed out on the floor before her, her catatonic mother-in-law in a chair beside her and video footage of the street below playing on a TV monitor behind her…

Chan-wook touches on notions of body-horror and ideas of the physical and the mental/spiritual aspects of what it is to be ‘human’ are discussed throughout. Shades of Cronenberg are swirled into the mix too as a number of images evoke that filmmaker’s distinct oeuvre - Sang-hyun kisses the bruises between Tae-joo’s thighs and they meet in a hospital to see each other – the cold and clinical setting the only place they can carry out their affair. Sang-hyun is shown lying on the floor drinking blood from a patient’s intra-venous drip, and the duo are depicted drinking blood from each other while they lay in bed, looking like they are 69ing. Absurd humour is rampant throughout the film, particularly in the scenes in which Tae-joo’s drowned husband returns to haunt the pair as a manifestation of their guilt over his murder.

The early scenes featuring the bandaged priest have a distinct comic book aesthetic to them and the character feels strangely iconic. Whilst there are moments that have been shown before in vampire films, Chan-wook still manages to dowse proceedings in a distinct magic-realism that is both beautiful and blood-dark and always refreshing. 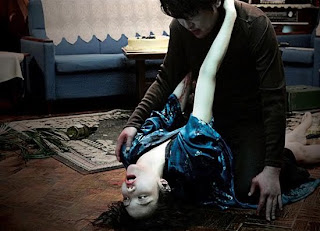 Kang-ho Song imbues his character with a quiet intensity that gradually becomes a sturdy resignation as his fate dawns on him. Sang-hyun remains sympathetic as he fights against his increasingly carnal desires. The character of Tae-joo is also painted in intimate strokes – fully enhanced by an astounding performance from Kim Ok-bin. The tragedy of their relationship is that it was only in ‘death’ that Sang-hyun could give her a taste of what it means to be alive, beautifully illustrated in a scene depicting them jumping from rooftop to rooftop throughout the city. A reference to the ‘hopping vampire’ of Asian cinema?

In terms of sound design, Thirst is a very squelchy film – the licking and sucking and guzzling of blood is at times nauseating and dizzying, but always seemingly present. And very audible. Another interesting aspect of the film is the exploration of how the characters attempt to cope with their new existence – how they attempt to make it as normal as possible. Their home is painted bright white (which will make any blood spilt in it look all the more striking) and lit with the harshest of lights to compensate for the lack of sunlight in their lives. The couple also record the hustle and bustle of the street below their home on a video camera and play the footage back on TV monitors that substitute windows, throughout the night hours. 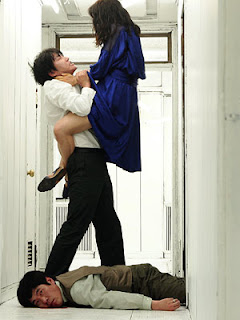 When Sang-hyun turns off the car engine in the film’s closing scenes, there is a bittersweet sense of finality. We know what is to follow and it’s strangely heartbreaking. All the more so because of Tae-joo’s efforts to make him change his mind and then her own desperate attempts to hide from the rising sun – for the first time in her life she actually fights to live. The last scene has few words but it doesn’t need them. Chan-wook conveys all he needs to with astounding visuals and the achingly beautiful resignation of the two characters as they prepare to die. The moment when the camera pulls back to reveal the car has stopped on top of a cliff overlooking the sea is breathtaking and the final shot of the shoes falling to the ground is quietly powerful and poetic.

Chan-wook’s determination to create something a little different marks this film as one of the most remarkable and refreshing vampire flicks for some time.

the jaded viewer said…
The character of Tae-joo was more interesting to me than Sang-hyun. She lived a meaningless life and now was given a gift.

Seeing her abuse this new power was awesome but Sang-hyun was there to be the priest he needed to be.

Christine Hadden said…
Top-notch review, James.
Makes me want to watch it all over again! You touched on all the reasons why this was one of the finest vampire movies to be released in quite some time;)
19 January 2010 at 13:13