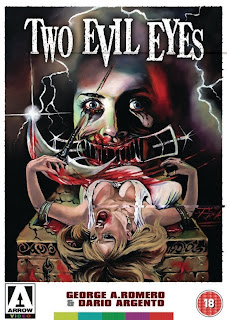 Directed by Romero, The Facts In The Case Of M. Valdemar tells the story of scheming Jessica (Adrienne Barbeau) who convinces her psychiatrist lover (Ramy Zada) to hypnotise her dying husband (Bingo O'Malley) in order to get him to sign his fortune over to her. When the husband dies while still under hypnosis, he finds himself caught in a limbo between the worlds of the living and the dead, and hungry for revenge.

Featuring plenty of bloody mayhem to please the gore-hounds, courtesy of special make-up effects wizards Tom Savini (Dawn Of The Dead, Creepshow, Day Of The Dead) and John Vulich (Day Of The Dead, TV's Buffy The Vampire Slayer), and set to a suitably chilling score by Pino Donaggio (Carrie, Dressed To Kill, The Howling), Two Evil Eyes is an essential addition to every horror aficionado's collection. 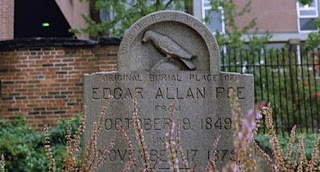 The two segments of the film differ as much as the directors who helmed them; Romero is a solid story-teller who has a practical, no frills approach to his subject matter, and meticulously planned his shoot, whereas Argento prefers to revel in style and provocative trimmings, taking his usual experimental approach to its abstract conclusion.

Two Evil Eyes has a different look and style from many of Argento’s other films. The hyper-realistic photography by Beppe Maccari lacks the striking results of Argento’s previous work, and the film is the closest the director has come to creating something that could be described as ‘conventional.’ The camera work however is as ravishing as ever.

Argento films the escalating frenzy of delirious events with his usual style and precision, while Romero quietly ponders death, in a creepy but stagnant tale of revenge from beyond the grave. As a result, Two Evil Eyes is a very disjointed and uneven piece of work from two film makers who are as competent and individual in their approach to their craft as they are different from each other. An intriguing footnote in the careers of both men.

Franco Macabro said…
I liked Two Evil Eyes, on Romeros side of the film, I liked how the corpse talked from beyond, from the other side explaining what he was seeing. Spooky stuff right there.

And the ending to Romero's story..wow!

Argento's half starts with that great scene of the police investigating a murder involving a pendulum, obviously referencing other Poe stories.

It has the kind of things Argento likes, he infused the tale with witches, the inquisition, and the significance of black cats in witchcraft.

I hate one scene in Argentos half and its when Harvey Keitel commits suicide, Argento used some reverse photography that I think made the take look cheesy and lazy, but I don't know why he did that. It doesn't feel like something he would just let slip.

But aside from that, both stories are cool in their own ways. Im surprised at how faithful Romero has been with the whole zombie genre, I mean, even here on this film he goes back to it.
19 April 2010 at 21:37

Shaun Anderson [The Celluloid Highway] said…
A very uneven film (name an anthology horror film that isnt) and very much a film of two halves. It has always struck me as something of a shame that there wasnt more consensus and collaboration on the overall visual and narrative style of the film, after all this was supposed to be something of a tribute to Poe. Instead we get two filmmakers trying to outdo each other. Nevertheless I'll be buying this great looking new release from Arrow...excellent extracts from your book as well James.
19 April 2010 at 22:17

James Gracey said…
Yes, I'm really enjoying these new releases from Arrow. Not only is the cover art always pretty cool, but some of their special features are pretty nice too.

Film Connoisseur there are a couple of pretty chilling little moments in the film, but overall it feels rather half-arsed and thrown together. It is an interesting and deeply flawed work in the careers of both directors.

Shaun I agree with you - a very disjointed and uneven effort, though still really quite entertaining. Groovy artwork on this release too, non?? :o)

Tower Farm said…
I guess I may have to give this one another shot. I saw this about 15 years ago and thought it was boring at the time. On the other hand, I thought Adam Sandler was funny back then, too. So, there is no telling how I might feel about this today.