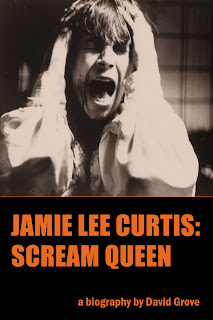 During the years 1978 – 1981 it was virtually impossible to visit the cinema or your local video shop without encountering at least one slasher film boasting a masked homicidal maniac, stalking ‘n’ slaying copious amounts of partying teens in various dark locations with weird noises that needed to be investigated. Alone. It was also pretty much guaranteed that at least one of these films would star Jamie Lee Curtis, an actress whose early career was built on playing plucky, resourceful characters who face off against maniacal killers.

A new book by David Grove sets out to explore and celebrate this particular part of Curtis’s career, which involved a number of seminal slashers now revered as classics (and some of my favourite horror titles). Beginning with Halloween in which Curtis portrayed Laurie Strode – who became the prototype for the heroic figure of the 'final girl' - subsequent roles followed in The Fog, Prom Night, Terror Train, Roadgames and Halloween II.

David Grove is the author of Fantastic 4: The Making of the Movie (Titan Books) and Making Friday the 13th (FAB Press). He has written for such publications as Dreamwatch, Fangoria, Film Review, Film Threat, Hot Dog, MovieMaker, Rue Morgue, Sci-Fi Magazine, Shivers and Total Film.