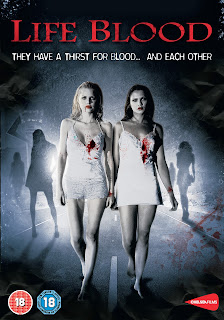 New Year’s Eve, 1969. Lovers Brooke (Sophie Monk) and Rhea (Anya Lahiri) are at a totally hot, swinging party in LA. The evening’s glitter ball bedazzled festivities are cut short when Brooke stumbles into the bathroom and interrupts Hollywood A-lister Warren James (Justin Shilton) attempting to assault a young fan (Scout Taylor-Compton – Halloween, Halloween II). Brooke stabs the would-be rapist in the throat. A lot. Escaping to the desert in their car (“I just wish I could let the top down and let this warm desert air cleanse my body”), Brooke and Rhea then encounter God herself (Angela Lindvall), who offers to turn the pair into immortal, vampiric angels of death, destined to sexily wander the earth destroying evil wherever they find it.

Cut to forty years later. Our lovers are resurrected from their desert tomb to begin their totally divine mission. This naturally involves a shot of them strutting along a moonlit desert highway in lingerie. Not in slow motion though, because that would just be gratuitous. Enamoured with her newfound power and immortality however, Brooke decides that satisfying her constant bloodlust is much more fun than doing God’s work and goes on a totally horrifying killing spree that only Rhea can stop!!

Life Blood holds much promise in its trashy, irreverent premise. Dubbed ‘Daughters Of Darkness meets Thelma and Louise’, the concept of sexy vampires kicking ass in the name of the Lord (who is also an alluring and provocatively attired sexpot, of course) holds the promise of much guilty pleasure. But does it deliver on this lurid and preposterous promise? Hell. Yeah. Well actually, yes and no. Much delight is gleaned from the irresistible campiness and sordid Joie de vivre on show, and Life Blood positively zips along for its first act, content to revel in its own kinky trashiness. Until our avenging vampire-angels need to seek refuge from the rising sun, that is. 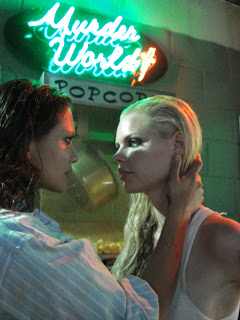 When they hide out at a gas station, the movie pretty much slams on the breaks and doesn’t seem to know what to do next. While it is necessary to the plot for Brooke and Rhea to hide from the sun in a confined location, and was also most likely due to budget constraints, the second act feels dragged out, with the rest of the film playing out in the confines of the gas station. Having Brooke kill and drink the blood of whoever enters the station just isn’t enough, and the story skimps on the alluring promise of vampire-angels (or whatever they actually are!) ridding the world of nasty sinners. Even the priceless dialogue (“Can we close the blinds? This desert’s really hot”) can’t keep things ticking over. A modest body count is racked up nonetheless as Brooke offs everyone who enters the gas station, appropriately (yet very oddly) called 'Murder World.' And that is pretty much it for the rest of the film! She also bumps of Rhea when they fight about how to use their powers. Once night falls though, Rhea revives and gives chase. The ending, when it comes, is of the blink-and-you’ll-miss-it variety. An all too brief showdown is over in a flash, quite literally. Evil is predictably smote and our now lone avenging lesbian vampire-angel acquires an unexpected sidekick.

The avenging angel theme recalls such titles as The Prophecy and recent clunker Legion, but Life Blood never really does anything with the intriguing premise of God-created, heavenly vampiric avengers sent to drain the life from evil-doers who cross their path. Instead, what we get is a movie set in a gas station in which a couple bitch and fight and kill some people. While its potential to become a future trashy cult classic is debatable, Life Blood still manages to unspool as a lurid, mainly enjoyable, blood-soaked romp with a distinct comic book vibe.

Hey, it’s about totally hot lesbian vampire-angels fucking shit up for God! What were you expecting?

"I AM Murder World!"

I liked this movie a lot. I had little to no expectations and was pleasantly surprised. A flawed but fun and charming lesbian vampire movie. Something else that surprised me was Sophie Monk's performance. She wasn't "great" but a lot better than I expected. Hopefully she does more horror, because she was quite good in HILLS RUN RED as well.
28 October 2010 at 11:37

James Gracey said…
Totally! I also had no real expectations, and was very surprised by how much I enjoyed it. I think it straddled a fine line between taking itself seriously, and yet, not really taking itself seriously. If that makes sense! Monk can do tongue-in-cheek very well.
I'd watch this again. With wine next time!
28 October 2010 at 12:34