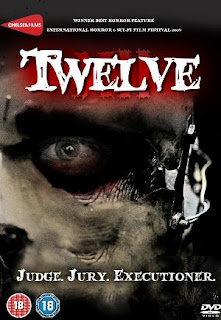 Five years after being convicted for the abuse of a minor, Leonard Karlsson (Jeremy Fitzgerald) is released from prison bearing a hideously disfigured face; the result of sadistic beatings administered by fellow prisoners. Hell-bent on extracting brutal vengeance on the twelve jury members responsible for his incarceration, he returns to the remote Arizona desert town in which his trial was held. One by one, he abducts and sadistically slaughters the jurors…

Opening with a rapidly edited montage under the credits detailing Karlsson’s alleged crimes, subsequent imprisonment and torture at the hands of his fellow prisoners, XII begins proper with a shockingly brutal murder that seems to come out of nowhere, involving a newly wed couple, a shotgun and a lone desert highway. From here we’re introduced to FBI Agent Naughton, who is hot on the trail of a bizarre serial killer making his way across the country, abducting people and skinning their faces. We catch a glimpse of the killer’s handiwork when Naughton examines the body of the unfortunate bride from the previous scene. So far so good, XII hits the ground running and looks set to maintain its course. A number of other characters, including waitresses Claire (Emily Hardy) and Vicki (Vanessa McNab), are introduced and we’re given a snapshot of their humdrum lives in a tiny town in the middle of nowhere. We also find out they are desperate to go and make new lives for themselves in the city because it’s all they talk about, and that Agent Naughton is a family man, because he talks to his young daughter on the phone loads.

The characters are fleshed out by a number of reliable actors, including Nick Searcy as down-trodden Officer Kent. Hardy provides a convincing performance of an at times infuriatingly inept character, while McNab steals every scene she's in as Vikki, a young woman who seems certain to make a stand and defend herself when the killer comes calling. McNab exhibits a dry, delightfully acerbic wit throughout. Having the members of a jury as the film’s victims not only ensures a pre-destined body count – the ‘twelve’ of the title – but also provides a more engaging ‘fodder list’ than the usual bunch of randy teens heading to an isolated backwoods cabin to party. 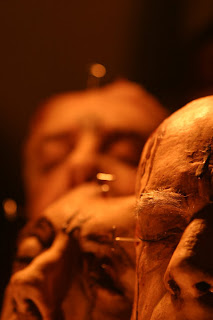 The location of the small town in which these characters live is effectively realised – a couple of scattered homesteads here, a few trailers in a small park there, a bar and a diner pretty much make up this place. To make matters worse, in the lead up to Christmas the place further empties, leaving a small number of residents behind. Easy prey for the killer headed to town. And Karlsson is one seriously creepy, repugnant killer. He recalls old-school ‘revenge’ slashers such as Cropsy and Freddy, and like them, he reappears after years in exile, hideously disfigured, to seek bloody retribution. Swirling another element of A Nightmare on Elm Street into proceedings, the vengeance-seeker in this film is also a child killer. Though we’re never sure if he was guilty or not of the crimes he was accused of, he never attempts to proclaim innocence – then again, it’s revealed his tongue has been cut out. This area of ambiguity is never explored. Is this a wronged man, driven insane by the crimes inflicted upon him? Or is he just a monster, plain and simple? Either way, his revenge is swift and merciless.

Another interesting, though unfortunately underdeveloped idea is the central premise of someone extracting revenge on the jury responsible for his imprisonment. This group of people are being ‘punished’ as a result of their civic duty. They were called upon to be responsible citizens. Is this perhaps a sideswipe at a culture resigned to shoot first and ask questions later?; a culture in which the accused are already believed guilty before considered innocent? Who knows? These ideas are left on the back burner in favour of gratuitous, though admittedly very effective, scenes of torture and flaying. 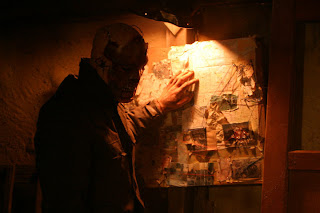 XII is a thrilling tale that while effectively put together, often lacks the real tension it could have mustered had it not stuck so rigidly to convention. Despite pulling a ‘Psycho’ by offing a character that was set up as the protagonist early on, it’s just too predictable. In its favour though are buckets of atmosphere and decently realised ‘Texas Chainsaw’ visuals – all harsh, amber-hued and burnished landscapes, bright blue skies and sunspots on the camera lens – courtesy of director of photography, Mark Petersen. The genuinely unsettling score courtesy of Tim Montijo and grimy Hooper-esque production design by Daniel Gomme also enhances the sinister, unsavoury moodiness of events.

Ross Horsley said…
I just caught this on the Horror Channel and kinda liked it. The story's not great (for all the reasons you point out) but the characters and acting were surprisingly good, and I enjoyed the sustained climax. A bigger budget would've helped them sort out a lot of the problems, I reckon... like maybe affording a courtroom scene!
17 June 2011 at 22:17