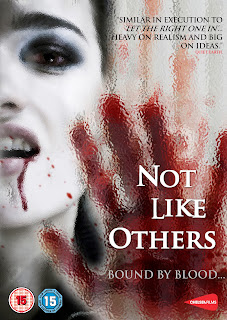 Vera (Jenny Lampa) and Vanja (Ruth Vega Fernandez), a pair of vampire sisters, struggling to live in seclusion in the bleak suburbs of Stockholm, are forced on the run when Vera kills and feeds on the leader of a tough biker gang in a nightclub. While evading the thuggish gang, Vanja reveals she wants to quit their vampire lifestyle and try to live in the real world. Terrified by of a life of solitude, Vera decides she will do anything to keep Vanja by her side. Meanwhile, the skinhead bikers are closing in…

What with Not Like Others being a Swedish vampire film and everything, it is quite difficult not to draw comparisons between it and Let the Right One In. Both films were even released in the same year and while this one was relegated to the shadows of the other, that’s not to say this is a bad film; far from it in fact. It is just that Let the Right One In is such a lyrical, one of a kind masterpiece. While they do both feature a stiflingly close central relationship, vampires and a wintry Swedish setting, there the similarities end, and to make further comparison would do this film great disservice. From the get-go Not Like Others sets out to stalk along a grainy, handheld-filmed path all its own. Following along the same bloodlines as the likes of Martin, The Hunger, The Addiction and of course Let The Right One In, Not Like Others takes a strikingly original approach to its vampiric subject matter. Adopting a highly realist slant, enhanced by the use of digital photography, natural lighting and real locations, this accomplished debut feature from writer-director Pontikis unfurls as a highly compelling and strangely poignant lo-fi indie horror. 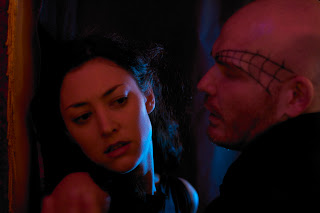 The story plays out in eerily empty, bitterly cold streets, fluorescent-lit hallways and dark and seedy clubs, and always in the dead of night. Actually, the events depicted all happen during the course of one night. Stockholm is depicted as a lonely, bleak city and danger seems to lurk in every dark corner. The lonely existence of the sisters is evoked seamlessly, and they have few interactions with anyone other than themselves. Their relationship is a stifling one of severe co-dependency that calls to mind the claustrophobic friendships (and the dangerous imaginary worlds created therein) exhibited in the likes of Fun, Ginger Snaps, Disco Pigs and Heavenly Creatures. Once Vera has bled the biker dry, in a moment that is shocking in its jolting frankness, and the biker gang are in hot pursuit, the film, far from becoming just an extended chase, opens up into a study of existential crisis. Vanja longs to live a normal life and realises that her sister can’t be a part of it. Up until now they’ve been each other’s worlds and Vera doesn’t take the news well. 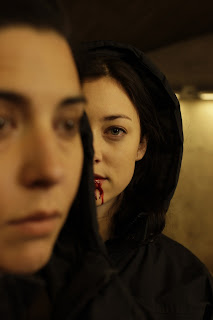 In keeping with the realist approach, the word ‘vampire’ is never uttered. In fact no obvious conventions or clichés are evident – are they really vampires, or just outcasts who have lived too long in each other's pockets and a fabricated world of their own making? We see Vera drinking the blood of the biker, and Vanja stealing bags of blood from the hospital and being sick when trying to eat ‘normal’ food, as though she can’t ingest it. But things are still strangely ambiguous. They have seemingly no home or no roots and just seem to drift unnoticed through society, phantom-like - they even gatecrash a party and no one seems to notice them. The clothes they wear are also indicative of a life led on foot, they are dressed in warm coats and running shoes as though constantly on the move. Little touches like this make us wonder about where they have been, where they come from and how long they’ve been around – as does a quip about the usage of 1950s era lingo. These little flourishes wrap the film in a melancholy veil. Tension slowly builds and the realisation that things will not end will is prevalent throughout. As the sisters flee down street after street, past the lit-up windows of houses and the lives being lived within them, we get an overwhelming sense of their ostracization and the feeling that they’ve always been on the outside of society looking in; particularly Vanja. Events soon feel claustrophobic as they are constantly stifled by the perpetual night they unravel within.

Not Like Others is an original, purposeful and exceptionally bittersweet take on vampire lore and it presents its protagonists as sympathetic, misunderstood characters. The result is a surprisingly moving story of two sisters whose common dependency upon human blood, and each other, become the very things that threaten to tear them apart.