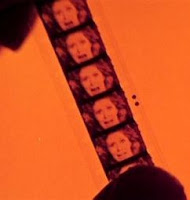 Whilst certainly not a bad film, Terror Trap wasn’t exactly the grindhouse shocker I thought it would be. The central premise, a creepy motel used as a front for a snuff movie studio, is instantly charged with so much potential. While not a wildly original idea (Vacancy did this a few years back), it is still a provocative one, and the fact that the residents of the small rural town the motel is situated outside, are aware of what it is used for, adds another perverse level to an already sinister set up. And hey, ever since there was some nasty business at the establishment of Norman Bates and his mother, the humble motel - haven and sanctuary to weary travellers in transience - has been a reliably sinister location in horror movies.

While lamenting the mediocrity of Terror Trap, I got to thinking about other films that revolve around the idea of snuff movies; films that are said to depict the actual death/murder of someone, without the use of special effects. Here are five films that draw on the urban legend of snuff movies…

Mute Witness (1994). A deliriously taut exercise in sustained tension and suspense, Mute Witness is about a mute special effects artist on a low budget horror movie. Staying late at the studio one night, she witnesses the filming of a snuff movie and is relentlessly pursued around the sprawling studio buildings by the filmmakers. Add to the already twisted premise the fact that the main character can’t speak – therefore she can’t call for help or alert anyone to her whereabouts – and you have a deliciously thrilling and prolonged game of cat and mouse that builds to a shockingly violent climax.

My Little Eye (2002). Whether you view this as a barbed critique of contemporary society’s obsession with voyeurism and ‘reality TV’, or a tightly wound, slow-burning chiller, My Little Eye is an effective shocker that succeeds admirably on both levels. A group of strangers audition for a Big Brother style web-series in which they stay at a remote house in the middle of snowbound-nowhere, while their every move is recorded by myriad CCTV cameras throughout the house. Events take a turn for the sinister when the group realise the site they’re being broadcast on is a snuff site… Bloody murders, paranoia and bleak denouements ensue.

Vacancy (2007). The premise of Terror Trap sounds a lot like that of Nimród Antal’s gritty survival horror, Vacancy. A young married couple are stranded at an isolated motel and after the discovery of hidden video cameras in their room, they realize – to their horror, natch - that unless they escape, they are set to become the reluctant stars of a snuff film. Also like Terror Trap, this begins with much promise as Antal piles on the dank suspense and panicky feeling of helplessness before descending into conventional clichés and shocks with wild abandon. The briefly glimpsed snuff movies in this one are dark, despairing and surprisingly disturbing for such a mainstream Hollywood horror.

Tesis (1996). The debut feature of Alejandro Amenábar, director of Open Your Eyes and The Others, Tesis (Thesis) focuses on a film student who, while researching her thesis on violence in cinema, inadvertently watches a real snuff movie and is drawn into the hellish world of snuff film-making. Taking a highly reflexive approach to its subject matter – the effects of cinematic violence on audiences – Tesis addresses thorny issues head on and unflinchingly. That it is also a tension-fuelled thriller as it does so, is no mean feat. While it dares to ask why audiences are so enthralled by scenes of violence and bloodshed, it doesn’t hold back on treating us to a disturbing trek into highly unsettling territory. It inspired the Nicolas Cage-starring, Andrew Kevin Walker-scripted 8MM.

Peeping Tom (1960). Critically panned on its release, this film effectively ended the career of its director, Michael Powell. It was only years later that Peeping Tom was given the reverence and respect it deserved. Unfolding as a Hitchcockian thriller in which a disturbed young man murders various women and films their terrified faces as he does so, Peeping Tom also serves as a disarming investigation of the voyeuristic nature of film audiences and their fascination with fear and death. Placing the audience firmly in the place of the killer (he uses a spiked tripod leg of a film camera to kill his victims as he films them), Peeping Tom had an overwhelming influence on the work of Dario Argento and sundry slasher movies in which the audience, the voyeurs, are implicated in the onscreen murders through incriminating point of view camera work.

Terror Trap is released on DVD from February 28th.

Franco Macabro said…
My favorite one from that list is Thesis, it gets extremely tense towards its last moments.

Im gonna be seeing Peeping Tom this common week, so many people talk to me about it, I need to finally give it a chance. Recently saw Michael Powell's The Red Shoes, and it blew me away, so Im looking forward to Peeping Tom, though they tell me its something diametrically different then his previous films. Im intrigued to see how much he switched, from a beautiful, poetic epic like The Red Shoes, to a film like Peeping Tom, panned by critics.
6 February 2011 at 02:51

Aaron said…
I actually liked VACANCY a lot. The sequel on the other hand... one of the worst movies I've seen in the last couple of years. Also, nice to see some love for MUTE WITNESS. What a great, under-appreciated movie.
6 February 2011 at 06:37

James Gracey said…
Thanks, Mykal. It's the kind of concept books are written about it. So much to say and explore!

Film Connoisseur I hope you like Peeping Tom. It really was so ahead of its time. I've never seen The Red Shoes, but any movie that inspires Kate Bush is ok by me! Must check it out at some stage.

Aaron, I need to revisit Vacancy. I expected something else after I watched Kontroll.

Simon - absolutely. There are quite a few films that pass themselves off as 'real' film footage/snuff movies. I guess The Blair Witch Project and The Last Broadcast et al fall into the same category.
6 February 2011 at 12:04

Monster Scholar said…
Vacancy scared the absolute crap out of me and another film you might consider is S&Man
6 February 2011 at 23:17

maren said…
Thank you ,James
Tesis ,Mute Witness and Peeping Tom are 3 films I like a lot.
Movies that inspired Kate Bush/were inspired by Kate Bush :
look for Kate Bush in "Night of the demon" (hounds of love) on Youtube (I wonder if you know this one)
7 February 2011 at 00:31

James Gracey said…
Cheers Maren! I do indeed know Hounds of Love by Kate Bush, it's one of my all time favourite albums. I actually wrote an article about the influence of horror in the work of Kate Bush - check it out here: http://www.bloodsprayer.com/reviews/music/it%E2%80%99s-coming-for-me-through-the-trees-the-influence-of-horror-on-the-work-of-kate-bush/
7 February 2011 at 12:39

maren said…
Great article! The way she looked on that photo just below the headline is priceless!And I did´t know "Man of a thousand faces".
I mentioned the YouTube clip because somebody was quite creative there mixing Night of the Demon and Hounds of Love, I think its quite a fitting tribute to Bush AND Tourneur
Another thought on Snuff movies:
Bigelow´s Strange Days is a lot: Neo Noir, SF, Big Budget prestige pic, Comment on social, political, racial ...... you know but its also a kind of SF Variation of Peeping Tom
7 February 2011 at 15:20

James Gracey said…
Oooh, that's a really interesting way to view Strange Days! I haven't seen that film in years - must try to check it out again soon.