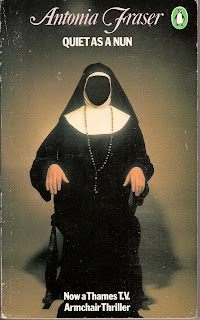 Armchair Thriller was a British television series, broadcast on ITV by Thames in 1978 and 1980. It was essentially a horror/supernatural orientated anthology series that specialised in adapting various spooky novels and stories. It consisted of two weekly 25 minute episodes, usually screened at 8pm on a Tuesday and Thursday evening. I’m too young to remember it, but a recent conversation with several (ever so slightly) older friends alerted me to one particular episode of the series entitled Quiet as a Nun…

Adapted from the 1977 novel of the same name by Antonia Fraser, Quiet as a Nun was a six part dramatisation revolving around Fraser's regular sleuth Jemima Shore, who revisits the convent where she was schooled following the mysterious death of one of the nuns. The nun, Sister Miriam, was a former friend of Jemima’s and she apparently starved herself to death in a ruined tower in the grounds of the convent. Jemima soon learns from the girls at the convent about a mysterious and malevolent figure called the Black Nun - a sinister faceless spectre which allegedly appears whenever a death is about to take place. The figure was seen just prior to Sister Miriam's death, and has been sighted again…

The final minutes of the third episode, aired on 18th April 1978, are regarded as one of the most chilling moments on British TV – and the very scene that ingrained itself into the mind of my friend, who spoke about it with a mixture of loving nostalgia and well-remembered terror. In the scene, Jemima, who is thoroughly engrossed in her sleuthing, gingerly enters the tower alone at night. Climbing up into the attic she is greeted with the sound of a rocking chair on old rickety floorboards… Turning slowly around she is greeted with the sight of the faceless Black Nun, who suddenly rises up out of the chair and advances menacingly towards the screaming woman… Watch the clip here. And the opening titles of Armchair Thriller here. And then imagine yourself watching them as a young child. Gah! 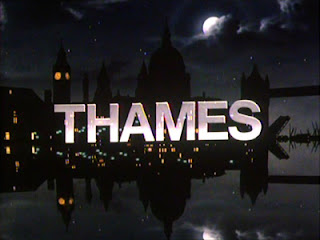 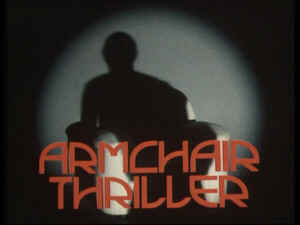 The series was transmitted before the traditional 9pm watershed, and was very popular with families – I guess much in the same way that Dr Who was (and still is). This is probably one of the reasons why it is still so fondly remembered – and so controversial at the time. Watching the scene now is creepy enough, but I’m sure if I’d seen this as a child, it would have had a much deeper, more troubling impact, and no doubt resulted in many a sleepless night… It ties in perfectly with the whole ‘behind the couch’ ethos – that wonderful feeling of nostalgia and safe fear in a domestic setting, linked to being scared of something as a child, and now really quite enjoying the sensation and the nostalgia it provides.

Hadn't heard of the series before... Do you know if it's been/will be released on DVD? That moment is absolutely lovely! Only recently did I really learn to appreciate ghost stories, and it sounds like a good one!
3 August 2011 at 20:08

James Gracey said…
Madelon! Good to hear from you. Hope you're well. You can indeed get the series on DVD - and after my friend's recommendation, I'm seriously considering picking it up... http://www.amazon.co.uk/Armchair-Thriller-Vol-1-10-Complete-DVD/dp/B001E6Q0SK

Wes said…
Anyone intruiged by Armchair Thriller should investigate the similar sounding Thriller, another British anthology series which ran from 1973-1976, memorable for its mix of mystery, suspense and supernatural elements. There's an excellent 16-disc boxset courtesy of Network DVD available at Amazon UK...
3 August 2011 at 21:22

Anonymous said…
That definitely would have been worrying to me if I'd watched it as a child! I can't believe I've never heard of this show before.
14 August 2011 at 10:10

raqs said…
I remember this. That nun terrified me for ages afterwards. If I had to go to the bathroom at night I'd convince myself she'd be outside the door.
5 February 2017 at 11:15

Sharron said…
Oh boy!
I've been trying for years to find the correct name of the series!
I watched this as a child with my parents but always had my fingers at the ready to hide my eyes behind! Only thing was...I was a tad too slow when this scene happened! Either that or I wanted to scare myself!
It's haunted me for #agoodfewyears I can't click on it to watch it...not even now! Lol.
I always thought the scene was from a Tales of the Unexpected episode... So happy to have finally put my mind on stop thinking mode!
This particular scene was talked about at school for weeks after between those either brave enough or stupid enough to have watched it!
I was only 10 or 11 at the time...so I don't feel so bad about being scared of an actor with a piece of black material over his or her face...the scene was set and done very well, with spooky/suspense music too...
Go on...get your head back to your younger years and press play...you know you want to....👻😱💺
10 December 2019 at 05:00

Gaz Freeman said…
For all those who want to take that spooky trip back in time to watch 'Armchair Thriller' again, the complete series is now available on DVD as a box-set...(I bought it through Amazon priced £39.99)...It has all the 'Thames in darkness' opening logo and even has the 'End Of Part One' interlude break, so you can pause it and go make a quick cup of tea to steady your nerves half way through an episode...lol
12 August 2020 at 01:31