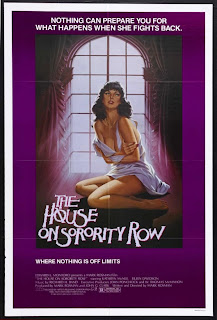 After a prank horribly backfires, a group of sorority sisters are stalked and murdered one by one while hosting a graduating party and attempting to dispose of the body that was the result of their prank going wrong. Talk about an inconvenience!

In true slasher style, we open with a prologue - to intrigue and set the scene for the bloodbath to come – in which a woman undergoes a problematic birth in a big house during a thunderstorm and is led to believe by her doctor that her baby is dead. Cutting to years later, the house is now a sorority house and the woman is revealed to be the house mother, Mrs Slater (Lois Kelso Hunt) – a formidable and cane-wielding dame who seems overly anxious for the graduating girls to vacate the premises. The young women have no such intentions though – they want to have a party to celebrate and they decide to play a prank on Mrs Slater to show her who’s boss. She ends up dead and the girls are left with her body to dispose of. It seems someone knows their secret though and begins to murderlise them one by one. Well, they do keep insisting on splitting up to investigate strange noises or to fetch a car from a dark garage and such. 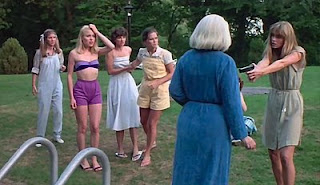 Anyway. Where The House on Sorority Row sets itself apart from many other slashers, is in its use of the dark secret bonding the girls together. Afraid to go to the police after their prank on Mrs Slater goes terribly wrong, they’re left guilt stricken, paranoid and lumbered with a body they’re desperately trying to dispose of. The group begins to disintegrate and spilt – and before long they’re at each other’s throats as bickering and panic sets in. Add to this the fact that somehow, someone knows the girls’ secret and seems intent on dishing out their own brand of bloody revenge, picking them off violently one by one, and you have a taut and pretty suspenseful – if rather conventional – slasher flick. Of course, it being an old fashioned slasher that sticks quite closely to the now infamous conventions of the sub-genre ain’t no bad thing. In fact, I think it’s fair to say that’s pretty much why these bloody and morally conservative flicks have remained so popular with horror fans since their hey-day in the early Eighties. There’s a certain comfort to be garnered from the familiar. 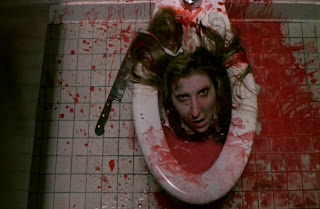 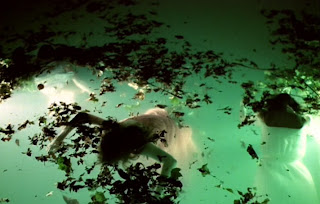 The House on Sorority Row also takes time to get to the blood (and even when we do, its all fairly restrained stuff), opting to build slow-burning tension and build up an atmosphere of mystery and queasy dread. The various discussions between Mrs Slater and her doctor also fuel the mystery, especially all his talk of ‘psychotic breaks’ and ‘latent violence.’ There are a few red herrings sprinkled throughout the mayhem – not least Mrs Slater’s mildly menacing physician who knows more than he is letting on about the house mother’s dark past. The script is careful to keep us guessing, and when the revelation comes, it is suitably twisted. As well as building tension around the plight of the young women as they try to dispose of the body, we’re also thrown intriguing titbits such as the discovery of a secret bedroom in the attic; cluttered with vintage toys and creepy jack-in-the-box music boxes, its obvious something sinister happened here; or lurks here. A threat emanating from the attic of a sorority house also permeated Black Christmas.

A number of striking images sear out from the screen – notably the moment when Katherine (Kathryn McNeil) discovers the severed head of her friend in a toilet, the moodily lit-from-below pool full of floating bodies and the hallucinations a drugged Katherine has of her dead friends entering the house after the party… The killer is kept mainly off-screen, save for a few brief glimpses – a spooky one in silhouette, and a brief one over a banister looking down on him revealing his deformed face. When he emerges at the end (in a genuinely chilling moment), he’s decked out in full harlequin gear and looks appropriately deranged. 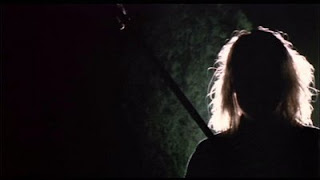 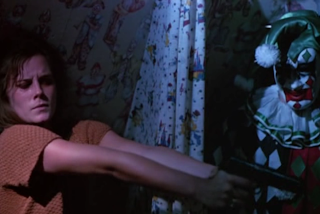 While characterisation of the group of friends is basically limited to various 'types', the cast bond together to make the group dynamics believable. As tension mounts within the group, friendships are tested and pushed to the limit, lines are drawn, hearts are broken and blood is spilled. The cast work hard to convey the burden of guilt and dark secrets. While some of the characters fall prey to freaking out and tripping over their own feet in empty hallways, others, particularly 'final girl' Katherine, try to remain level-headed, resourceful and thoughtful. The House on Sorority Row breezes along at a fairly brisk pace. It is surprisingly elegantly lensed and the lush orchestral score courtesy of Richard Band moves gracefully between nostalgic longing and eerie menace and suspense with twisted ease. 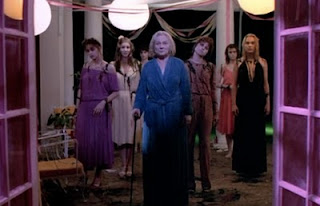 Seven young women, a guilty secret, a big sorority house and a psychotic killer wielding sharp things. The House on Sorority Row possesses enough neat twists, tension and chills to ensure it won’t disappoint fans of slasher films. While not as masterful as Halloween, or as gory as Friday the 13th, it still emerges as one of the better slasher films from the early 80s. Delta! Lambda! Death!

Wings1295 said…
Great review! This movie was one I hadn't seen as a kid and kept putting off. But when I did finally watch it, I liked it. Deserves to be among the occasionally enjoyed horror flicks of the 80s.
26 August 2011 at 21:32

Aaron said…
I love this movie. I watched it for the first time earlier this year and was really surprised. I especially like the final third when it gets all trippy. The final girl was impressive too, if I remember correctly.
28 August 2011 at 04:52

James Gracey said…
I too watched it for the first time earlier this year - and I've watched it again since. I think of all the many slasher flicks I've seen from the 80s, it is certainly one of the best - up there with the likes of Hell Night, Terror Train and My Bloody Valentine...
28 August 2011 at 19:20

deadlydolls said…
I watched this one a few months ago and liked it well enough. The only things that really stood out for me was that final scene with the harlequin (yes I"m naturally scared of them, but I did think this was staged really well) and the fact that the really bitchy blond used to be on Days of Our LIves. I think I watched the remake, though all I really remember about THAT one is that it starred the girl from Step Up 2 (the streets) who sounds like a 45 year old chain smoker.
1 September 2011 at 12:22

James Gracey said…
Emily I think your ability/willingness/gift to watch any old shit indiscriminately, parallels my own! For that my friend, I salute you!
I haven't seen Step Up 2 (The Streets) - or Step Up (The Kerb?), but I HAVE seen Save The Last Dance. I like it when dancing unites racial stereotypes in the ghetto. ;)
I think the actress who played Katherine in Sorority Row went on to star in Arachnophobia.
And while I haven’t seen the remake yet (see above), Carrie Fisher is apparently in it - so I might just have to check it out pronto!
1 September 2011 at 15:30

Regarding the Step Up series: part 1 is terrible, but 2 does this incredible reverse racist thing where it focuses on a middle class white girl in a racially mixed lower class dance troupe. She gets kicked out and instead goes to an elite school, where her and the other rich kid 'outsiders' (all model minorities, mind you) decide they want to form a dance group to compete at 'the streets' competition. So at the end, you have a white girl, asian guy, jewish guy, etc. dance group fighting to prove themselves to street dancers (most of whom are black) and triumphing. It's absolutely bizarre when you step back (or up) to think about it.
1 September 2011 at 15:36

James Gracey said…
Oh I know all about Carrie Fisher being the highlight in everything - except Scream 3 when she was ever-so-slightly out-highlighted by Parker Posey.
And who thought reverse discrimination in dance-off movies could be so life altering! Oh to be middle class and have the gift of jazz hands. ;)
1 September 2011 at 19:29