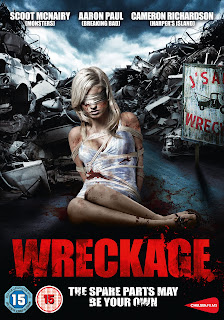 Wreckage unravels as conventionally as the slasher flicks of the Eighties which so obviously inspired it. It even opens with a flashback sporting some gritty domestic drama in which one of two young boys finally snaps and shoots their wrung-out, chain smoking mother and her dodgy drug dealer boyfriend. Cutting to fifteen years later, the film begins again with its most interesting, teasing and suspenseful scene featuring an encounter between a stranded young woman and her would-be rapist/murderer, a radio broadcast boasting the revelation that a dangerous prisoner has just escaped from prison and an unexpected conclusion to events. Wreckage then shifts gears again and opens properly as we’re introduced to the main characters, all of whom seem plucked from slasher movie history: the just engaged jock/ex-soldier and his perky fiancée, her best friend (who has just found out she’s pregnant) and the friend’s slacker/practical joker boyfriend. So far, so meh. They go drag racing, break down and wind up stranded in a wrecking yard where they’re picked off by an unseen assailant. 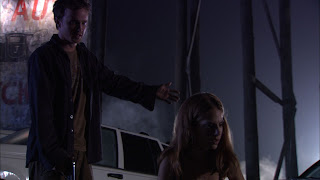 While it does stick to typical slasher structure and convention, Wreckage goes a little way to redeem itself with a few neat twists that throw various spanners in the works resulting in a few unexpected moments and surprises. They’re few and far between though. When his fiancée Kate (Cameron Richardson) is accidentally shot by Rick (Aaron Paul), Jared (Mike Erwin) runs into town for help. When he returns, his friends are missing and the typically ineffectual police are little help. Whilst searching the yard, they make the same dumb-ass mistakes made by their bygone slasher peers. They spilt up, investigate strange noises, don’t have phone signal, don’t call for back-up, they leave victims' bodies to come back for them later only for the body to be gone again and the like.

There is some intrigue mustered regarding the identity of the killer – a hulking brute in a welding mask who is only glimpsed briefly. Is he connected to the escaped prisoner? Who were the young boys from the prologue? As the setting is a wreckage yard, the deaths naturally feature car-wrecking themed pay-offs: various cast members are hung on tow-truck hooks, crushed inside cars and even have cars dropped on them. A couple of chase scenes add a fair amount of suspense, and the telling of tales concerning the owners of some of the car wrecks and their deathly fates provides a highly unsettling and disturbing moment, but as events just continue to plod on unevenly, Wreckage looks increasingly likely to be consigned to the low-budget, straight-to-DVD slasher movie scrap heap. Ahem. 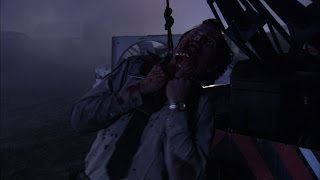 By no means a bad film, Wreckage just isn’t a very compelling one. The script is rudimentary and the direction uninspired. There are a couple of atmospheric shots of Jared running for town through the fog-sodden forest and along the deserted highway at night, but aside from providing moodily lit respite from the main action, they don’t really enhance it. The leads’ performances are all sturdy enough, but their characters aren’t in the least bit interesting, nor do they give us any reason to care about them. A bizarre turn from Monsters star Scoot McNairy as the redneck owner of the yard fails to aid proceedings; his wacky-eyed ramblings annoy more than entertain. Where Wreckage does succeed is in how it throws us off the scent of the identity of the killer and keeps us guessing. We know of course he is linked to the prologue, but we don’t know how. There are a fair few suspects and red herrings, and it all ties together quite well by the conclusion. It’s just a shame that the journey there was so lacking in suspense and originality.

Wes said…
Good stuff James... I was kind of intruiged reading about this one as the junkyard setting always engages my attention - I'm thinking Street Trash, A Nightmare on Elm Street 3 - it's a good way to factor in some dystopian texture on the cheap...but Wreckage sounds like a dead-end drive-in. I watched something called Borderland (pagan cult antics on the Tex-Mex border) a few weeks ago on Sky - a decent enough film but devoid of anything to stand it apart from the rest of the late night fodder. No disrespect to these young film makers - I imagine these tight indie productions are as tough as the massively budgeted studio films - but you wish they would think outside the box every once in a while...
12 August 2011 at 12:07

James Gracey said…
Yes, the setting also made me think of ANOES 3 and Street Trash. Alas, it was not exploited/utilised to as much effect as those films. Don't get me wrong, I still really quite enjoyed Wreckage, but it just didn't have anything to elevate it or make me want to recommend it. And that is no disrespect to the filmmakers - like I said, it wasn't a bad film - just not a very memorable one.
22 August 2011 at 12:32