The plot, so to speak, follows a nameless young woman’s downward spiral into madness, as her already seemingly fragile mental state begins to unwind as her body decomposes. Kayden Rose delivers a suitably detached performance that enhances her character’s dissociative outlook. She appears quite disconnected from those around her, and indeed from herself. It is tempting to read her state of decomposition as a physical manifestation of her inner hopelessness and self-loathing, but Falardeau provides no easy answers; he opts to let the tale unravel objectively. The young woman seems to have hit rock bottom and given up on life. She finds pleasure in nothing; not least her loveless relationship with an abusive man. What is perhaps most disturbing is how, much like Gregor Samsa in Kafka’s Metamorphosis, she just seems to accept what is happening to her; she even documents it, photographing the progress of decay and preserving the pieces that fall off her in little jars. 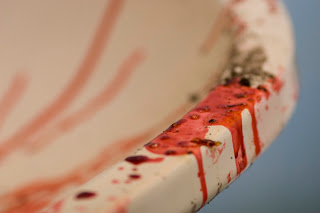 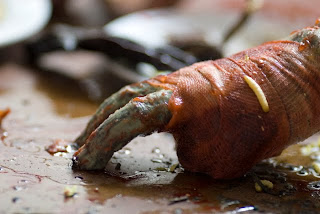 Taking time to establish the main character and her quiet, mundane life, the story gradually introduces subtle signs that something very wrong is happening to her; she helplessly observes bruising on her body and panics when some hair falls out. Eventually, as her condition worsens, bodily fluids abound as her insides begin to seep out and various appendages drop off; with Falardeau filming everything in unflinching close-up. It’s quite tough going, as the stagnant pacing, relentlessly gruesome effects and the character’s quiet desperation all weigh heavy on the narrative. Then again this is a film about a young woman slowly rotting to death in her own home, so it’s difficult to imagine it unfolding in any other way. There are distinct echoes of titles such as Driller Killer, Repulsion and The Yellow Wallpaper with their similarly haunting depictions of a lone protagonist slowly drifting into madness in the isolation of a singular setting. The young woman’s surroundings don’t take long to mirror her mental and physical disintegration; notably the yonic shaped patch of damp which ominously spreads across the ceiling above her bed. 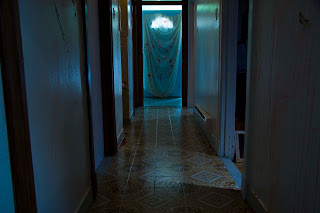 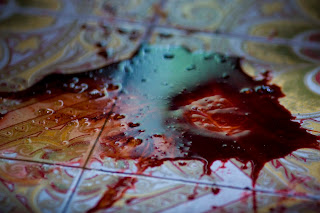 Thanatomorphose is also a stiflingly claustrophobic film; everything occurs in a small apartment. The intimacy, while not initially intrusive, soon becomes overwhelming. At the beginning of the film we see the woman and her boyfriend having sex, walking around completely naked and going to the toilet; as the story unfurls however, these mundane routines give way to much more disturbing scenes of graphic intimacy, not least the moment when the young woman masturbates furiously while blood gushes from her body. The abstract score, courtesy of Rohan Kriwaczek – the foremost authority on the history and practice of Funerary Violin music - incorporates mournful and sombre violin pieces with more intense electronic soundscapes, heightening tension and enhancing the grim atmosphere.

With its contemplative mood, deathly serious tone, crawling pace and unpleasant visuals, Thanatomorphose will not appeal to everyone; however those who stick with it might find themselves moved by its dark and despairing portrait of humanity, and the inherent weakness, fallibility and limitations of our mortal flesh. When the end comes it is truly harrowing, and the culmination of the young woman’s decomposition is realised through impressive stop-motion photography, with some deeply disturbing imagery that wouldn’t seem out of place in Hellraiser. Indeed, with its concepts of sex and death, eroticism and gore, Thanatomorphose recalls some of Clive Barker’s best work and is a truly original debut from a director well worth keeping an eye on.
Body Horror Éric Falardeau French-Canadian Horror Necrophilia Sex and Death Thanatomorphose

Cody said…
Oh, I've been eagerly waiting for this one since I first read about it right here. I was just wondering the other day about its status, I had no idea it was completed, EXCITEMENT!
4 November 2012 at 06:48

James Gracey said…
It just screened at Sitges, though I have no idea when it'll be available for home viewing. Stay tuned though - I've hopefully got an interview with the director soon! Fingers crossed.
4 November 2012 at 16:57

Unknown said…
Apart from this review I woild lkke to point out thanatomorphose is a greek word...thanatos meaning death and morphosis: the sequence or manner of development or change in an organism or any of its parts. I have no idea why its labeled by reveiwers and the director as a french word...maybe it was adopted but it did not originate in France. My source is just about every dictionary on the market. Thank you...that is all. (:
11 June 2013 at 01:04