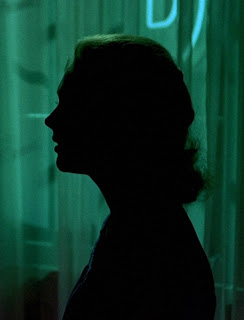 In keeping with Paracinema's Hitchcock Appreciation Month, this month's instalment of Audiodrome focuses on Bernard Herrmann's mesmerising score for Vertigo (1958). Hitchcock's classic tells of a retired acrophobic detective - played by Jimmy Stewart - investigating the strange activities of a friend's young wife. As he becomes completely bewitched by her, the film becomes a haunting rumination on the concept of obsession.

Of the score, Martin Scorsese commented: "Hitchcock's film is about obsession, which means that it's about circling back to the same moment, again and again … And the music is also built around spirals and circles, fulfilment and despair. Herrmann really understood what Hitchcock was going for — he wanted to penetrate to the heart of obsession."

Head over to Paracinema.net to read my review of Herrmann's masterful score and listen to an excerpt. While you're there, why not revel in all the appreciation of The Master and check out some of the reviews/articles on his work.
Alfred Hitchcock Audiodrome Bernard Herrmann Film soundtrack Paracinema Magazine Score Vertigo