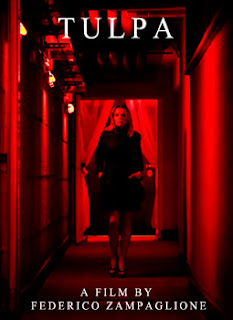 With his sophomore film Shadow, Federico Zampaglione – Italy’s answer to Rob Zombie – made a concerted bid to breathe new life into Italian horror cinema. While Shadow may have been more influenced by the current slew of ultra-violent ‘torture-porn’ films than Italy’s own distinct brand of bygone horror, it still emerged as an atmospheric and taut exercise in grim tension, with Zampaglione infusing it with enough of his own sensibilities to keep it surprisingly original. With follow up Tulpa, the director has attempted to create a contemporary giallo that is so faithful to its lineage it arguably borders on parody. Based on a story by Dardano Sacchetti, who wrote/co-wrote the likes of Cat O' Nine Tails (1971), Bay of Blood (1971), Schock (1981), The New York Ripper (1982) and A Blade in the Dark (1983) amongst many others, Tulpa is the lurid tale of Lisa Boeri (Claudia Gerini), a respectable businesswoman who secretly frequents a private sex club in search of euphoric pleasure. When her lovers are brutally murdered, she attempts to evade public scandal and is plunged into an increasingly nightmarish web of paranoia, bloodshed and shadowy psychosis. Evading attempts on her own life by the mysterious killer, she eventually turns detective to stop the sadistic marauder.

With Tulpa, Zampaglione has directed not only a stylish throwback to the sub-genre, but a contemporary giallo in its own right; complete with elaborate style, twisted whodunit narrative, fetishised violence and lashings of nudity. It perfectly captures the tone and feel of vintage gialli, while throwing in obvious nods to masters such as Argento, Bava, Martino and Fulci for today’s more knowing audiences. A completely straight-faced celebration of the giallo, Tulpa manages to evoke the sub-genre’s idiosyncratic tone a bit too well, resulting in convoluted plotting, questionable dialogue, bad dubbing and ropey performances. Switching back and forth between English and Italian, some of the dialogue provides unintentional humour, as does its unnatural delivery. Giallo aficionados shouldn’t have a problem with this, but it will most likely alienate wider audiences. However I would argue that illogical scripting and ludicrous dialogue are as much a part of traditional gialli as overwhelming style and sadistic violence, and here they actually enhance Tulpa’s bid to recreate the gialli of yesteryear. Remember, the primary focus of the subgenre was not logic and narrative cohesion, but stylish execution and deliberately shocking violence. That Tulpa also has the courage of its convictions and takes itself seriously, adds to its appeal. Had it been released in the Seventies – the heyday of the giallo – Tulpa would now be regarded as something of a cult favourite. 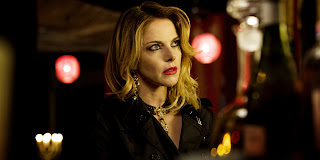 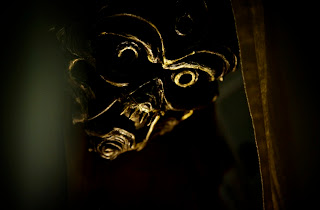 As with most gialli, Tulpa’s highlights are its extended and elaborate murder sequences. Opening with one of the most vicious and brutal scenes in recent memory, a kinky sex game is interrupted by a killer clad in long dark raincoat, fedora and black leather gloves, who uses a blade to slash one of the participants to death as the other looks on helplessly while trussed up on the bed. Another stand out scene begins with a prolonged and creepy stalking sequence and culminates with a character being tied to a carousel and having her face slashed by pertinently placed barbed wire every time she goes around. Alone in her impossibly vast and shadowy home, another hapless member of the club is doused in boiling water and viciously stabbed to death. At times Tulpa resembles a combination of Lizard in a Woman’s Skin and All the Colours of the Dark, with its heady delirium, secret societies, sexual deviancy and potentially unreliable narrator. In Tibetan mysticism, ‘Tulpa’ is a manifestation of mental energy; a thought that has taken physical form. With its pseudo-philosophical musings and talk of mystical transcendentalism, the film hints that otherworldly, supernatural occurrences are afoot. 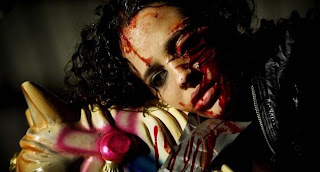 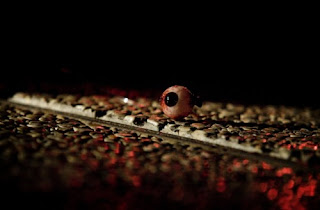 Amidst the outrageous deaths, Lisa attempts to keep her late night dalliances in the club secret while she vaguely attempts to track down the killer; navigating expository dialogue and trippy sex scenes presided over by the enigmatic club owner (Nuot Arquint). In classic giallo tradition, the story is awash with red-herrings; everyone has a motive and an ambiguous enough personality to ensure suspicion falls on them at least once. In the grand tradition of the giallo though, the revelation isn't everything; it's the journey towards it that takes centre stage. As evidenced in his prior film, Zampaglione has an eye for striking visuals, and Tulpa positively exudes a hallucinatory atmosphere rife with vivid lighting and unusual shot compositions. Mention must also be made of the score, courtesy of Zampaglione, his brother Francesco, and Andrea Moscianese, which eerily throbs and pulsates throughout proceedings, echoing the likes of Goblin and some of Ennio Morricone’s more discordant pieces. Although, is it just me or is there something inherently pervy about sax solos? Quite a few scenes are accompanied by such music which seems to underpin the sleazy shenanigans and city-by-night connotations. 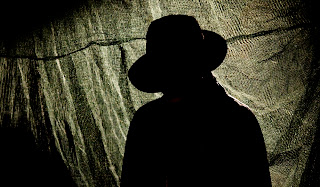 With its moody styling, audacious plot twists, sadistic violence, slack-jawed dialogue and delirious atmosphere, Tulpa should appeal to lovers of the giallo. As a straight-up modernised giallo, it possesses much to admire as Zampaglione recreates nostalgia-hewn memories of black gloved killers, glinting switchblades and imperilled heroines. Like some of the best gialli from the likes of Argento, Fulci and Martino, it doesn’t always abide by conventional narrative logic, and is as prone to wander into both esoteric and sublimely ridiculous territory in equal measure as its predecessors.
Federico Zampaglione Giallo Italian Horror Thriller Tulpa