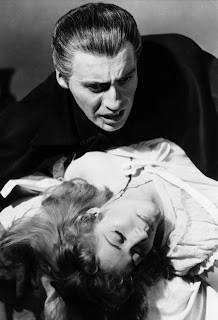 Perfectly epitomising the brand of lurid horror Hammer is now famed for, Dracula is one of the most important titles in the history of British horror cinema. Despite its low budget, it boasts a rich gothic atmosphere, impressive production design and iconic performances from Christopher Lee and Peter Cushing.

Jimmy Sangster’s screenplay, coupled with Fisher’s agile direction, not only streamlines Bram Stoker’s original novel, but accentuates the underlying sexual themes evident within it. Lee’s incarnation of Dracula emerges as a sexual predator, stealthily corrupting the morals of those he encounters. With feral ferocity he pierces the heart of polite Victorian society, unveiling repressed desires and creating lustful, hideously grinning she-demons in his wake...

Dr. Theda said…
Great performances by both of these Hammer Films Actors... I always enjoyed the "attention to detail" of the sets and props used in these films... good review...
21 March 2013 at 03:32