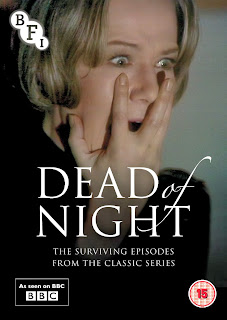 The Exorcism was part of the BBC’s Dead of Night horror anthology series from the early Seventies. Unfortunately not all of the episodes of the series have survived – three out of seven are all that is left, but they exemplify the series perfectly, capturing that unmistakably creepy and strangely nostalgic feel of ‘hide behind the couch’ television horror from yesteryear. The Exorcism tells of four friends who gather for Christmas dinner at a recently renovated old cottage in the English countryside. Throughout the evening a series of creepy occurrences suggest the spirits of the previous tenants do not rest in peace…

The first episode to be broadcast, The Exorcism unfurls as a thoughtful critique of middle class attitudes and complacency, with several characters attempting to reconcile their wealth with their socialist upbringing. The juxtaposition between their fickle chit-chat, contemporary ‘concerns’ and bountiful Christmas spread, with that of the plight of the former occupant, is strikingly conveyed as events proceed. No stranger to addressing such concerns, Taylor’s prior work was rife with biting commentaries on the British class system and socio-political issues. In the accompanying notes of the BFI release, The Exorcism is described by Lisa Kerrigan as a ‘socialist ghost story’ and a ‘pointedly political play wrapped up in a ghost story.’ That’s not to say the more supernatural aspects are in any way overshadowed by all the subtext. When the sun sets and things get creepy, they get very creepy. Proceedings gradually become more nightmarish. The power cut and wine that tastes of blood become the least of the guests’ worries when they glimpse a skeletal body materialising in Rachel’s bed and discover the house has been engulfed by an impenetrable darkness.

Elements of folk horror begin to manifest as the plight of the former resident of the cottage, a woman whose family died of starvation at the hands of her tyrannical landlord, is revealed. Old wounds open and the macabre secrets of impoverished land-working folk of yore breathe out of the bloody earth the house stands upon. Her dire circumstances – which speak of the circumstances of so many like her - and slow death are revealed through Rachel, as she becomes possessed by echoes from the past which serve to heighten the guests’ middle-class guilt. Tying in with the traditional notion of ghost stories cosily told around the fire at Christmas time, the horrors endured by the former occupant are relayed through Rachel, as she tells the others, and us, of the house’s morbid history. While we don’t actually see any of these horrors, the language used to describe them, and the pitiful tones they’re spoken in, are extremely evocative and pierce the gloomy atmosphere with a yearning pathos. While the characters are rich suburbanites who have lost the ability to see the world beyond their own garden gate, they’re relatively sympathetic; particularly when they realise the dark magnitude of their situation. The cast, particularly Anna Cropper as the perceptive Rachel, deliver uniformly effective performances which really enhance the sombre tone and chilling denouement.