The Living Dead at the Manchester Morgue 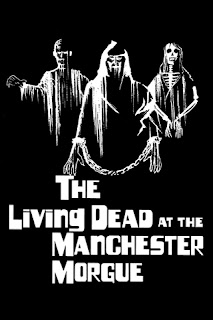 The Living Dead at the Manchester Morgue is an Italian/Spanish co-production, largely shot in England with a mostly English cast by a Spanish director.

George (Ray Lovelock) is a groovy antique shop owner in swinging sixties Manchester. He shuts up shop one fateful weekend to head off into the English countryside to fix up an old house with some friends. On the way his motorbike is accidently reversed into by Edna (Cristina Galbo). She agrees to give him a lift to his destination, after she has been to visit her troubled sister Katie. George insists on driving Edna’s car, and she is bizarrely okay with this.

And so begins a night of terror for George and Edna. Hunted not only by an ever-growing horde of the living dead shuffling across the countryside, but also by the police, headed by a tough talking Oirish Inspector (Arthur Kennedy), who believe George and Edna are a couple of hippy, Bonnie and Clyde-alike Satanists who are responsible for a gruesome death.

Upon its initial release, The Living Dead at the Manchester Morgue was condemned as a video nasty. However, despite some genuinely grisly moments, wildly uneven acting, atrocious dubbing and stop-start pacing, the film does contain a few interesting and thought-provoking elements.
For one, it takes a distinctly Ecological approach to explain how and why the dead are returning to life. Ok, while the scientific explanation offered for this in the film is completely laughable (an ‘ultra-sonic radiation omitting experimental insect and parasite destroyer’, which looks suspiciously like a combine harvester with a large aerial on top, is revealed to have effects on ‘primitive nervous systems’, such as new-born babies and the recently deceased, causing both to become flesh-hungry monsters), watched in today’s current climate of eco-awareness and Green-consciousness, it acts as a sort of cautionary tale warning of meddling with nature for our own gain. 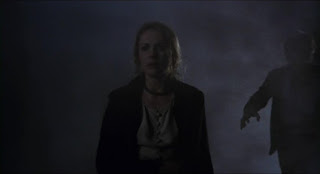 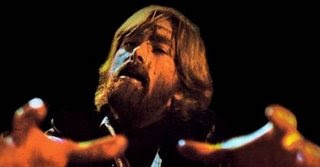 As mentioned, there is some gob-smackingly bad acting in this film, but it doesn’t interfere too much with the later tension and creepiness. Arthur Kennedy as the Oirish Inspector provides much unintentional hilarity with his dated ‘observations’ on city-life, hippy culture, sexuality and drug abuse. Indeed, the police aren’t really painted in a very flattering light in this film, and one can’t help but be reminded of counter-culture clashes with police in the sixties.

Many of the idyllic locations are shot in such a way as to render them quite sinister. The early scene in which George leaves Edna to go and ask for directions, echoes a similar moment in Romero’s Night of the Living Dead. Waiting by the car, Edna is attacked by a staggering vagrant, who turns out to be dead. Locked in the car as the salivating zombie bashes on the window, Edna’s plight is genuinely alarming.
Since no one else saw the attack, they assume Edna is a bit crazy and basically belittle and patronise her into silence. 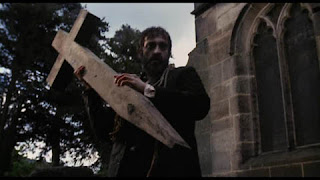 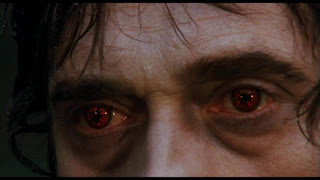 Another standout scene occurs when Edna’s addict sister Katie is interrupted from prepping her heroin by the same dead vagrant who attacked Edna. Running to her creepy boyfriend Martin, who appears to be holding her at an isolated house against her will, and likes to photograph things in the middle of the night, she witnesses his graphic murder at the hands of fore-mentioned dead derelict. The attack is captured on Martin’s camera; every time the flash lights up the scene, we see the gruesome events in tantalising snippets.

The soundtrack consists of a heavy and pulsating heartbeat that really helps build tension, particularly in the later scenes in the graveyard and the hospital.
The make-up and special effects are top-notch and really quite stomach churning and when the pace eventually picks up, proceedings become rather engrossing with an obvious, if unexpected, socio-political and environmentally aware commentary running throughout.