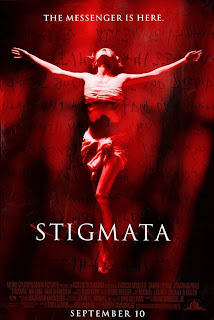 The religious significance of pigeons! Patricia Arquette as a Saint! Gabriel Byrne’s furrowed brow! Jonathan Pryce as a stereotypical, English-accented, Vatican Priest coverer-uper of miracles (boo hiss). All lovingly filtered through MTV aesthetics and strobe-light editing, with enough dry ice and back-lit rain to give Ridley Scott a run for his money, Stigmata has it all. And a positive message about how personal religion can truly be, to boot.

Fast-livin’, free-lovin’ Frankie Paige (Patricia Arquette) has it all: a spacious apartment with minimalist interior, a cool job as a hair stylist in a snazzy salon in Pittsburgh, an eclectic mix of funky friends and clubbing buddies, and an uncanny knack for somehow managing to sustain the expense for all this while she works as a hair stylist. After her mother posts her some rosary beads that belonged to a recently deceased Priest, Frankie begins to exhibit explicit signs of the stigmata – wounds on her body that mirror those inflicted upon Christ when he was crucified. The stigmata are usually only suffered by the devoutly religious – but Frankie is a fast-lovin’ atheist. What gives? Father Kiernan (Gabriel Byrne) is dispatched by the Vatican to alternately furrow his brow and grin cheekily and to disprove miraculous phenomena. When he realises that Frankie’s newly acquired affliction not only interferes with her hectic social life, but also has no logical explanation, he agrees to help her. But only after she flirts with him and gives him a trim. Our intrepid duo eventually discover a vast conspiracy within the Vatican to cover up religious texts written by Jesus Christ himself and completely contradict the structure and organised religion purveyed by the Catholic Church. 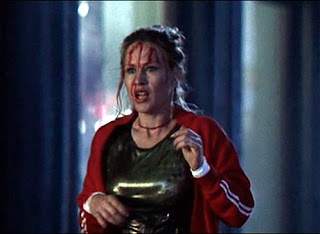 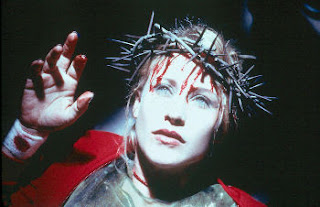 The film opens with Kiernan going to South America to study a statue of the Virgin Mary that has cried tears of blood since the death of a renowned local priest. He also discovers that the doves living in the church have been acting oddly. They flutter about and their feathers waft ethereally around the beautifully lit interior of the building. A young boy suddenly pinches the rosary from the priest’s coffin and sells it to a tourist who sends it to her fast livin’ atheistic daughter in Pittsburgh.

We go immediately from the sobriety and quite creepy atmosphere of this prologue to a blasting techno soundtrack and a series of epilepsy inducing shots of a city and Patricia Arquette doing ‘everyday person’ stuff. Like lighting a cigarette and sexily smoking it, sharing a laugh and giving some money to a homeless person (she IS just like Jesus), going to work and sharing a laugh with her sexy colleagues and then partying hard and going home to have sex with her sometime-boyfriend. Testament to director Wainwright’s skill as a filmmaker, he really gives us so much information in this opening music video, sorry, montage and really fleshes out Arquette’s character. She might be an atheist with a rich social life, but deep down inside she really is a caring person who could easily de-power the Catholic Church and put an end to oppressive organised religion (!). Characterisation on the head of a pin this is not! And Pittsburgh IS the modern day Gomorrah.

As I was deeply affected by Bladerunner and watched The Crow a few too many times and had fallen for all the moody lighting and aesthetic delights of other such gloriously stylised films, I fell head over heels in love with Stigmata (I blame the over-use of the religious significance of pigeons). Whereas those films actually had intriguing stories to tell, the visuals in Stigmata are seemingly only there to distract you from the fact that there isn’t really anything going on with the story.
It would seem Wainwright was deeply influenced by the opening credit montage of Se7en and just thought how cool it would be to make a whole film like that. 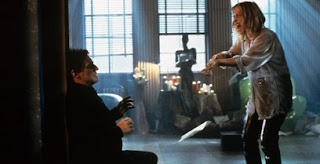 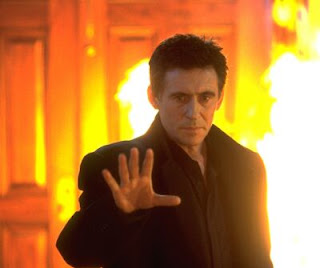 Instead of a potentially slow-burning and brooding affair, we get bombastic MTV visuals, over-exposed lighting, pigeons in slow motion, a beautifully lit Patricia Arquette flailing around seductively, and enough heavy-handed Catholic iconographic imagery to sink a very large heathen ship. Oh, and candles. Lots of candles. Candles feature in almost every scene, and aside from making Frankie’s luxurious apartment a bit theistical looking, they just look so moody and pretty.

When Frankie experiences the ‘attacks’ that inflict her stigmatic wounds, the editing becomes more frantic and the images of her writhing around in agony are spliced with shots of a hammer driving a large spike through a hand or blood flowing backwards. It just screams ‘hey look at this – its really profound! But goddamn, does it all look mighty pretty. Wainwright has taken a potentially enthralling story with theological debate and some interesting points about the potential danger of organised religion, a LOT of religious symbolism and pigeons as doves, and pummelled it all through a vibrant music-video type filter; complete with freeze frame edits, slo-mo, jump cuts and every other kind of cut known to humanity (and maybe one or two not known to humanity, it all happens so fast its hard to tell). The result is unsurprisingly, a really long music video about a woman who might be a saint. Or something. Fortunately, a rather intriguing subplot involving the highly secret movement within the Vatican, whose main goal is to disprove miracles and keep important texts written by Jesus himself hidden from the world lest they debunk the power of the Church, is never explored, lest it detract from the onslaught of pumping visuals and heavy-handed symbolism. 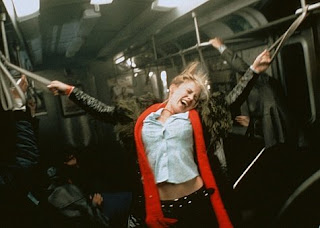 The not so subtly emerging love story between Frankie and Father Kiernan feels tacked on and completely unnecessary and there does appear to be an eerie subtext about motherhood, but this is never explored. Or else I’m just reading way too much into what is otherwise a very shallow film that just looks really cool.

Heavily compared to The Exorcist upon its release, aside from a vaguely sinister prologue set in an exotic location and the fact the story is about the possession of a young woman, the two films could not be more different. There IS also the exorcism scene towards the end of Stigmata where Frankie writhes around in a huge bed in front of an open fire and spits insults at the Priests by her bedside before the room is consumed by CGI flames, but this doesn't even come close to the power that similar scenes in The Exorcist wield. While The Exorcist was supremely creepy and unsettling, Stigmata is loud, brash and an exercise in pure style over substance. 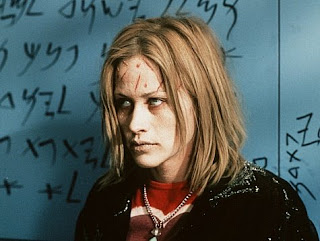 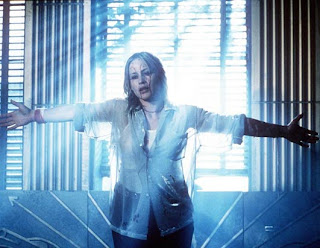 As mentioned, the religious significance of pigeons is of utmost importance in this film. Frankie takes a solitary bath in her exquisite apartment, adorned in candles naturally, and is interrupted by one of the feathery creatures. As its feathers float serenely into her bath, she suffers her first stigmatic experience and beautifully lit blood flows from her bath tub. Arquette eventually dons a white sheet with some pigeons perched on her shoulder. I think we are supposed to marvel and maybe even get a few chills because of how much she resembles St Francis of Assisi or something.

The soundtrack comes courtesy of Smashing Pumpkins' Billy Corgan, and is all drum machines and plinky-plonky synths, with some songs by the likes of Bjork and Natalie Imbruglia thrown in to keep it contemporary.

Stigmata will always have a very special place on the video shelf in my heart. It is many things to many people: infuriating, profound, colourful, dumb, provocative and touching. And features more religious significance of pigeons than you know what to do with. Lets hope that the alleged forth-coming sequel delivers the goods in as beautifully lit a package, albeit a probably straight to DVD package, as this one.
Gabriel Byrne Patricia Arquette Religious Horror Film Rupert Wainwright Stigmata Vatican Conspiracy Theory

From what I heard on the samples site, they sound really good.

Anonymous said…
From what I remember about this film, it was the tacked on love story that took me out of it.
28 February 2009 at 05:47