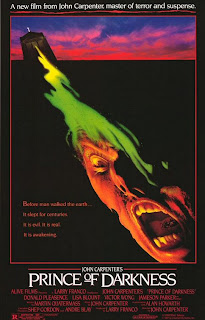 John Carpenter’s Prince of Darkness is a woefully underrated and highly moody horror flick from 1987. After the discovery of a giant canister containing an eerie green and swirling mass under a church, a group of students specialising in Philosophy, science, theology and linguistics are invited by the troubled priest (Donald Pleasance) who discovered the canister, to investigate it. They realise that the lurid green liquid inside is Satan himself and that the only way to open the canister is from the inside…

Soon, the liquid begins to seep out and possess the students, one by one. Meanwhile outside, a group of menacing street urchins led by Alice Cooper surround the church and the remaining students must barricade themselves in, unaware that they are in as much danger, if not more, from their own group inside.

The collective dream shared by the students is, for this reviewer anyway, one of the most memorable, creepy and quietly unsettling images presented in a horror film.

A static-hewn shot of a shadowy figure lingering sinisterly in a doorway backlit with spectral light, is perhaps the film’s most striking and remarkable image. As we slowly approach, the figure gradually begins to emerge ominously from the darkness… While we never see the figure fully emerged, the quiet menace these scenes evoke is unshakable. It turns out that these images are somehow being broadcast from the future and filtered through the collective subconscious of the group of students. It would appear that if they don't succeed in preventing Satan from emerging from the cylinder, he will overcome them and enter the wider world as broadcast from the future. The soundtrack during these moments is made up of distressed radio frequencies and dead air, fizzling in and out with blips of broken and inaudible words broadcast over seemingly empty airwaves. Chilling, to say the least.

The film hangs heavy with an air of dread, gloom and pessimism, it comes as little surprise that Carpenter includes it in his unofficial ‘Apocalypse Trilogy’, also comprised of The Thing and In the Mouth of Madness.
Creepy Scenes Donald Pleasance Dream Sequences Eighties Horror John Carpenter Prince of Darkness Satan Siege Movie

Anonymous said…
I agree that this film is terribly underrated. It does a great job building atmosphere.
Early(ish) John Carpenter is unbeatable.
19 February 2009 at 20:47

James Gracey said…
I couldn't agree more. I think Prince of Darkness quietly holds its own against the best of Carpenter's early output.
21 February 2009 at 17:29