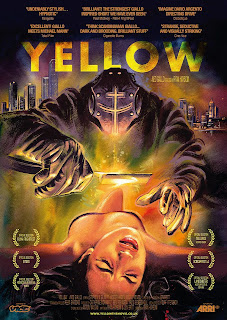 Italian giallo films, made popular by the likes of Dario Argento, Mario Bava and Sergio Martino, are renowned for their brutal violence, dazzling style and convoluted ‘whodunit’ narratives. Immensely popular in Italy throughout the late Sixties and early Seventies, they eventually fizzled out of fashion when Italian cinema as whole began to wane. Throughout the past couple of years however they have appeared to make something of a comeback; specifically in terms of their influence over a new generation of filmmakers. Recent films such as Hélène Cattet and Bruno Forzani’s Amer, Peter Strickland's Berberian Sound Studio, Guillem Morales’ Julia’s Eyes and Federico Zampaglione’s Tulpa, highlight the impact the giallo has had on contemporary horror cinema, with its combination of exploitative violence, art house aesthetics and gloriously dubious fetishisation of death.

Another notable title to proudly wear its giallo influences on its blood-spattered sleeve is the short film, Yellow. Telling of a man and his increasing obsession with tracking down a vicious serial killer who has been sadistically murdering women across a nameless city, the short boasts slick stylistics, gorgeous cinematography (courtesy of Jon Britt), an irresistibly moody electronic soundtrack (courtesy of Antoni Maiovvi) and more nods to the gialli of yesteryear than you can shake a glinting switchblade at. But it’s not just a pastiche of the visual grammar of the sub-genre/cycle of films (Italian genre cinema ran in cycles); it’s also an example of a filmmaker avidly acknowledging his influencing while still making his own mark. 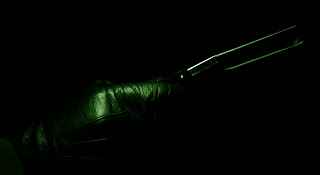 One of the highlights of the film, dazzling style and hallucinatory soundtrack aside, is how it cattishly toys with audience perception. When discussing Dario Argento’s Tenebrae, Leon Hunt notes in A (Sadistic) Night at the Opera, that ‘the female victims are made to look as similar as possible, giving a sense of the same woman being killed over and over again.’ Haysom deploys a similar stroke of subtextual genius in Yellow by casting the same actress (Hester Arden) to play the various victims. Is the killer reliving history by envisioning the death of a particular woman over and over again, or is it his warped perspective that makes him view all women as one in the same?

The various shots of the sleuth driving around a darkly beautiful cityscape by night highlight his sense of unease and isolation; like all amateur detectives in the giallo, he seems to work alone, with no help from the police. Indeed, his isolation is so well evoked; Yellow exudes a stark and lonely atmosphere – verging on bleak – ensuring it has a truly haunting quality that immediately sets the viewer on edge. The performance of Stephen M. Gilbert really impresses. As the tortured man on a mission, he conveys a wealth of world-weary emotion without even speaking.

Keep a violated eye out for Mr Haysom and co in future, for if Yellow is anything to go by, this lot should deliver all manner of interesting and cool cinema.*crosses fingers for a feature length giallo*
European Film Neo Giallo Psychological Thriller Ryan Haysom Serial Killer Short Film Yellow

irish said…
I must have missed something. Because I thought it was poorly done. It reminded me more of stalk and slasher movies such as He Knows you're alone. The ending was not a surprise. The Only thing I liked was the music. Although it was nice to have an actor of a certain age in the lead.
9 February 2018 at 00:06