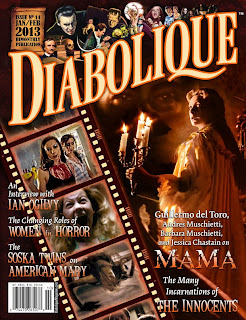 Issue 14 of the deliciously macabre Diabolique is now available for pre-order.

A bi-monthly print/online horror magazine, the aim of Diabolique is to explore the various aspects of the horror genre - including film, literature, theatre and art - with a specific focus on gothic sensibility.

All manner of ghostly shenanigans and haunted happenings abound in this issue, including a look at the making of the Guillermo del Toro production, Mama, and an array of articles on Henry James's The Turn of the Screw and its various adaptations - including Jack Clayton's chilling classic, The Innocents.

There's also an examination of the history of haunted house films, a look at the dark side of love in classic horror cinema, an exploration of the history of Arnold Böcklin's Isle of the Dead, and a little something by yours truly on Hammer's new stage adaptation of The Turn of the Screw and the lineage of the Theatre of Horror.

systemshocks said…
Great that you are writing for Diabolique, James. Their gothic sensibility must be right up your street. Great magazine. I love their podcasts too.
17 January 2013 at 12:51