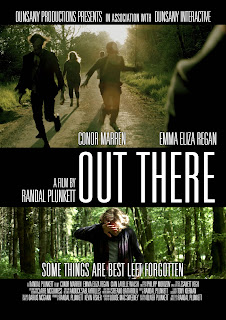 When Robert (Conor Marren) awakens deep in the woods with a head wound and no memory of how he got there, he attempts to find help while memories of the recent past come flooding back to haunt him…

Director Randal Plunkett’s brief but powerful tale hits the ground running and immediately draws us in with its sinister atmosphere and quietly smouldering tension. The early on sense of isolation and danger, together with the juxtaposition of the beautiful, sun-dappled woodlands and the macabre discoveries made within them, is a potent mix. The main focus of the narrative is Robert’s cautious, increasingly desperate exploration of his immediate surroundings, and his gradual realisation that something is wrong. Very wrong. Stumbling along old country lanes – like those ones in old Irish tales on which the devil is said to have been glimpsed - as the quiet around him relentlessly encroaches, he eventually happens on an old deserted farm; the only sound coming from a generator, breaking the silence like a harbinger of doom. Entering a nearby cottage, he sees ominously cryptic messages scrawled in Latin - extinctus amabitur idem (the hated man when dead will be loved) and vitam impendere vero (dedicate life to truth), which add a further sense of panic to proceedings.

Accompanied by a rumbling, intensely unsettling soundtrack (courtesy of Darius McGann), Robert’s shocking discovery in the cottage, and the lead up to it, is one of the highlights of the film. The production design of the dingy dwelling is exquisitely morbid, though hints that it was once a modest but cosy family home. As an array of disturbing accoutrements is revealed, frenzied panic is interrupted by the suggestion Robert isn’t alone in the house… 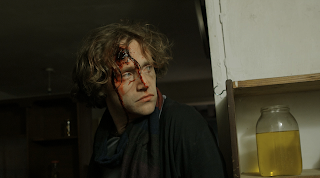 Tension is also generated from the various sun-kissed flashbacks he has of his girlfriend Jane (Emma Eliza Regan). These not only serve to gradually explain how he ended up alone and injured in the woods, but create a sense of unease as they chart the disintegration of his relationship with her. When she imparts surprising news, he doesn’t seem to be as happy as he should, and the notion that something is festering between them becomes almost unbearable. Plunkett’s deployment of slow-burning tension finally ignites in a jolting climax - heralded when a body in the road stands up - which feels all the more powerful because of the increasingly nightmarish build up to it. A rash decision made by one of the characters will haunt you long after the credits evaporate.

A brief but memorable story of one man's search for the truth in what appears to be the apocalypse, combining eerie atmospherics, beautiful camera work, creepy locations and dripping, clawing tension.