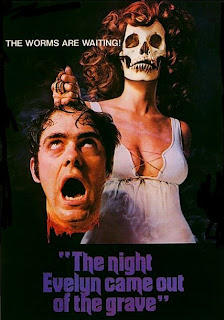 When Lord Alan Cunningham is released from a stint in a psychiatric hospital for murdering red-haired prostitutes reminiscent of his unfaithful late wife, he quickly remarries in an attempt to redeem himself. Once he and his new wife settle into the family home – a crumbling gothic mansion – a series of gruesome murders suggest his former wife has returned from the dead to wreck some terrible revenge…

The Night Evelyn Came Out of the Grave is one of several gialli from the early Seventies which exhibits unusual gothic influences. Alongside Sergio Martino’s Your Vice is a Locked Room and Only I Have the Key, Antonio Margheriti's Seven Deaths in the Cat’s Eye and Miraglia’s own The Red Queen Kills Seven Times, it boasts a moody gothic atmosphere, crumbling mansion setting, psychological deterioration, dysfunctional family melodrama and one of those ‘have-the-dead-come-back-to-haunt-the-living-or-is-someone-trying-to-drive-the-protagonist-insane’ type plots. Initially the differences between the giallo and more traditional gothic horror seem completely at odds with each other. Gialli were, at the time, contemporary based thrillers with convoluted whodunit plots; a far cry from the baroque traditions of the gothic. Delve a little deeper however and you’ll find that both types of films possess certain similarities, and when the two styles are amalgamated, as they are in the likes of Evelyn, the result is intoxicating. The various psychological perversions of the characters that inhabit the giallo and the more traditional gothic horror film are but one heady similarity that helps bridge the hybridity. The seemingly supernatural events in the plots of gothic literature and cinema were quite often revealed to be the work of a completely deranged individual, who is nonetheless also completely fallible; as they are in the traditional giallo. Their bloody antics are inspired by greed, lust and good old fashioned insanity. 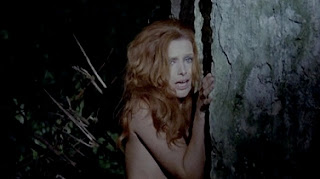 Miraglia exhibits a penchant for ravishing style; the camera work is fluid, the lighting moody and the music haunting. Evelyn plays with audience perspective from the outset, as its twisted and twisty narrative uncoils in myriad unexpected directions. The setting - a vast and crumbling gothic mansion complete with a torture chamber in the dungeon – also serves to highlight Lord Alan’s (Anthony Steffen) fragile psychiatric state; in the grand tradition of high gothic melodrama, its gradual deterioration is reflective of the protagonist’s psychological breakdown. Moments in which the supernatural creeps into the narrative to enhance the gothic atmospherics include a spooky séance scene in which Alan’s, frankly unhinged, family try to make contact with the spirit of his late wife, the titular Evelyn. A number of nightmarishly effective moments also include a taut chase scene which culminates in the spooky crypt behind the house, and features Erica Blanc wearing nothing but thigh-high leather boots as she’s pursued through the draughty mansion, dashing in and out of vast dark rooms decked out with cobwebbed chandeliers and dust-covered furniture. Similar scenes rich in a vintage gothic ambience, feature Gladys (Marina Malfatti) wafting through the castle in scant night-robes, as she’s menaced by strange noises in the night, and the various scenes in which Alan peruses the spectre of his dead wife through fog enshrouded gardens. Some of this imagery would be echoed in Miraglia’s The Red Queen Kills Seven Times, not least the sight of Gladys wandering through the grounds at night in a red cape. 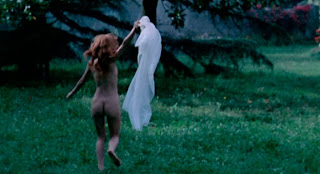 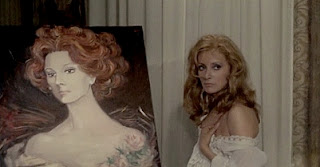 Another overtly gothic element of the film is the significance attached to the portrait of a dead woman – in this case Alan’s wife Evelyn – which serves to remind certain characters of the past and highlight its hold over them. Portraits of dead women were similarly used in the likes of Hitchcock’s gothic melodrama Rebecca and Riccardo Freda’s ravishing tale of necrophilia The Horrible Secret of Dr Hichcock. The moment when Alan spies Gladys in front of his wife’s portrait as she adjusts a red wig is equal parts chilling and beautiful. Speaking of beautiful, there are also gorgeous slow-motion flashbacks in which Lord Alan’s wife runs through a meadow at twilight in diaphanous, billowing robes – which of course she soon discards – to rendezvous with a secret lover. These are imbued with strange poignancy thanks to Bruno Nicolai’s ice-meltingly beautiful score – which takes a break from 'gothic-lounge' mode to feature tremulous and tingling piano motifs, breathlessly sweeping strings and wordless vocals. 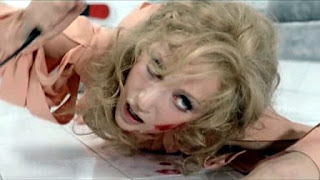 Exploitative moments of titillation more typical of the giallo are also evident, and imbued with a morbid theatricality. One scene features an exotic dancer who emerges from a coffin to perform a kinkily macabre strip-tease. Interestingly, given certain revelations later in the plot, this moment is quite telling, with its eerily alluring maiden emerging from a coffin to perform in an act. All the red herrings and blackmail sub-plots the giallo is famed for abound throughout Evelyn. Most of the characters have motive for murder. They are not a sympathetic bunch. The women are portrayed as scheming and duplicitous, and the men suspicious and sleazy. Indeed the protagonist is a barely functioning psychotic who takes red-headed prostitutes back to his castle to act out morbid fantasies with them before killing them. The film also has a strange humour coursing through it and features a number of bizarre moments - such as the line up of identical maids and an unusual attempt to dispose of a body involving a skulk of foxes. There’s also a premature burial for the Poe fans, an imperilled wheelchair-using aunt for fans of Bay of Blood and myriad creepy shenanigans afoot in the family crypt. 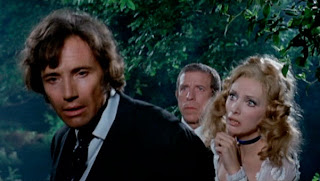 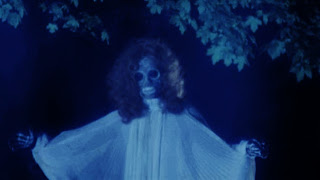 Franco Macabro said…
Thanks for that review, I will certainly be checking this one out, I love giallos and spooky atmospheric films, and I love all those filmmakers that this film is influenced by, thanks for the heads up.
18 January 2013 at 18:50

James Gracey said…
Hope you get a chance to check it out, Francisco. I also recommend The Red Queen Kills Seven Times by the same director. Wonderfully atmospheric giallo with lashings of gothic sensibilities woven through the plot. A review is forthcoming... Hope you're well!
20 January 2013 at 22:39