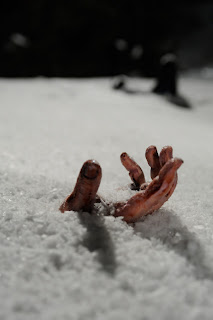 Horror films regularly feature unfortunate characters in extreme circumstances and situations. Whether they be battling poltergeists or demonic possessions in the comfort and privacy of their own homes, or evading hulking brutes with big kitchen knives in a remote backwoods cabin; settings usually play an important part of what makes horror stories compelling and relatable.

What if you add harsh winter weather to the mix though? Wintry, snowbound horror films can often be chilling in more ways than one. A typical narrative of man versus, well, whatever monster he's facing, soon takes on the added aspect of man versus the elements; which can often be just as threatening - and much more relatable. Or perhaps the elements themselves are the threat? Films such as Frozen, The Shining, The Thing and 30 Days of Night – to name but a few – feature characters in already horrific situations which become somewhat exacerbated by freezing temperatures and blinding snow-storms. Isolation, hypothermia, cabin-fever and death's freezing clutch can surely ensue.

The diabolically delectable Christine and Marie of Fascination with Fear are currently focusing on winter based horror, and invited me along for the (sleigh) ride. For the next two weeks, we’ll be highlighting a few of the best (and worst) frost-nibbled chillers from the icy silver screen of horror. Join us, won’t you? We can promise a lot of blood on snow...
Blogathon Blood on Snow Fascination With Fear Winter Horror

Miss Venture said…
I showed Frozen to a load of under-15 kids at school once. Two went to the medical room vomiting, and one fainted and hit his head on the door. RESULT!
30 January 2013 at 21:51