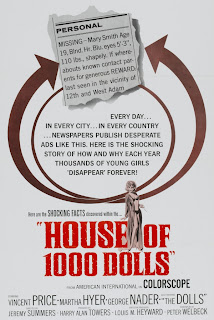 While vacationing in Tangiers, trendy couple Stephen and Marie learn that their friend Fernando’s girlfriend has been reported missing. Before long, Marie is abducted when she attends a magic show hosted by the mysterious Felix Mandeville. It soon transpires that she is being held captive in a plush brothel along with a slew of other women who have been ‘collected’ from around the globe by the dastardly Mandeville in a covert sex-slave operation!

This little oddity of a film is, aside from being a lesser-seen Vincent Price vehicle, a thoroughly entertaining (in that guilty sort of way), though really quite tame romp. Produced by Harry Alan Towers (Fu Manchu, Jess Franco’s Justine, Warrior Queen and Howling IV: The Original Nightmare amongst other trashy delights), it is, according to Mark McGee, author of Faster and Furiouser: The Revised and Fattened Fable of American International Pictures, “quite possibly the sleaziest movie AIP ever made.” It’s a tale of imperilled women forced to work as sex-slaves and the macho men who would be their saviours, but despite its claims to be an expose on the evils of the sex trafficking industry, House of 1000 Dolls quite simply unspools as a rather campy yarn. The moments of exploitation – scenes depicting the scantily-clad women mud-wrestling, cat-fighting or being whipped for trying to escape - provide much of the running time; but it isn't remotely as risqué as it purports to be.

Thats said, House does have a few surprises up its sleeve; not least an impressive opening boasting so much macabre promise. After a hearse pulls up outside an exotic mansion, the coffin is delivered inside and opened by a sneeringly suave Vincent Price, to reveal a beautiful woman inside who awakens with a fright. With this opening you’d be forgiven for expecting a morbid little mystery thriller to unfold. From here though the plot becomes quite bogged down with myriad characters and subplots and it takes a while to pull everything together. Meanwhile much camp amusement ensues. When it gets going, it’s all really quite riveting; the gently simmering plot eventually boiling into life with a lively denouement. 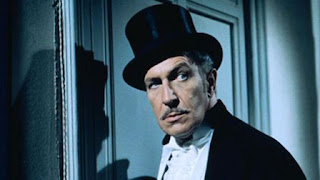 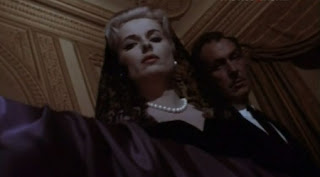 Director Jeremy Summers can’t quite muster the tension House needs to make it truly memorable. A couple of chase scenes are effectively handled and provide a little respite from the uneven pace, but even the scene in which the gymnast makes a break for it, shimmying down the wall of the house only to have her already scant clothes ripped off by the guards in hot pursuit, is more akin to Benny Hill than a suspenseful thriller. The saving grace is the main cast, who all deliver decent enough performances; particularly Price who is always watchable. Unfortunately, while he relishes his typically sinister yet strangely tragic role, he isn’t given nearly enough to do here.

Despite the pedigree of its cast, and that irresistibly exploitative premise, it’s a rather beige film. However, while its tameness is a little disappointing, House is never dull, and even if it simply can’t live up to its trashily exploitative promise; it’s still a distracting little thriller with enough twists and campy delight to hold your interest.