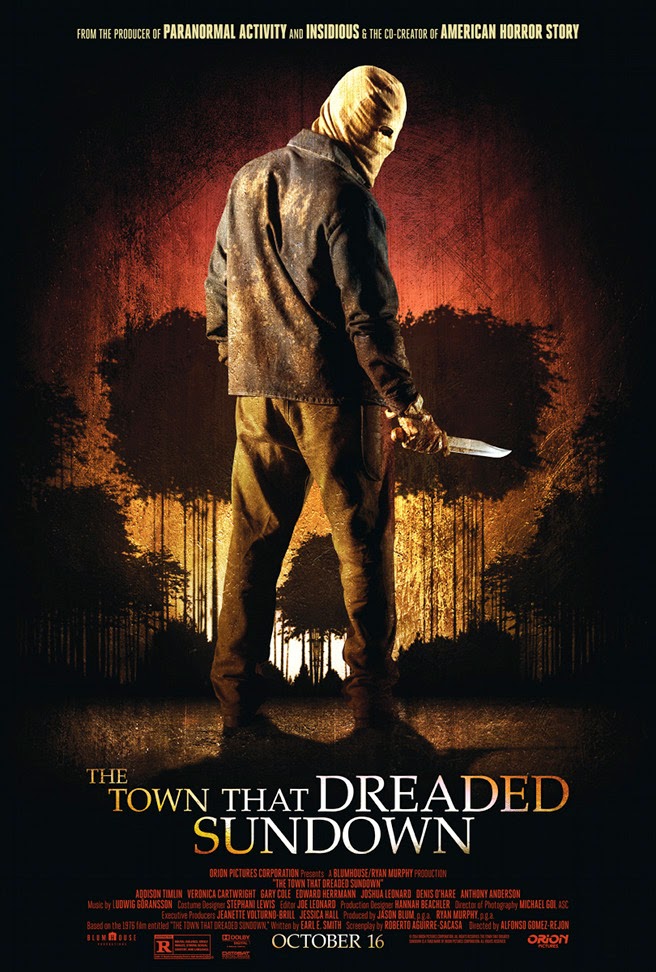 The immensely taut yet stylish direction comes courtesy of Alfonso Gomez-Rejon, whose tenure on TVs American Horror Story is apparent in the tilted angles and fluid, often gravity-defying camerawork. While his direction is undeniably stylish, though not distractingly so, its also incredibly effective. Roberto Aguirre-Sacasa’s screenplay isn’t constructed around murder set pieces (as most slasher films usually are); there is an actual mystery to be solved at the heart of proceedings. That said, each set piece is expertly mounted and chilling in its pay-off. The violence is strong, nasty and merciless and usually comes after moments of protracted tension, enhanced by a hypnotic score by Swedish composer Ludwig Göransson, which often switches from melancholy to menacing in a heartbeat. Despite the brutality, The Town that Dreaded Sundown is a frequently beautiful looking film - all burnished sunsets, homey interiors and lurid motel and street lighting - loaded with striking imagery; not least the creepy appearances of the killer, dubbed The Phantom. With his face covered by a burlap sack mask, he’s a haunting sight and his initial appearances recall similar moments from John Carpenter’s Halloween, when he is just glimpsed in the background or periphery of various shots, mask hovering in the darkness, wraith-like.

The effect of a crazed killer preying on the residents of sleepy Americana is, more often than not, overlooked or merely glossed over in favour of gory scenes and bloodshed. Not so here. Aguirre-Sacasa’s screenplay examines the devastating effect of the murders - and indeed the 1976 film inspired by them - on the small town community. Any sense of normality is completely decimated by the intrusion of the killer on small town life. Everyone becomes a suspect; strangers and neighbours alike are treated with suspicion and contempt. The film has quite a few red herrings and suspects and an atmosphere of mistrust, paranoia and fear is carefully established. What adds to the horror is that the killer could quite conceivably be anyone and is most likely a resident of the town, interacting with oblivious, unsuspecting neighbours on a daily basis.

There are some really interesting parallels with the highly underrated remake of My Bloody Valentine in the examination of the impact of tragedy on small, insular town communities and how people bond together or pull apart. A strong sense of community is established and as the story progresses, we witness it torn apart by the impact of the murders. The script also explores the pressures small town environments can put on their younger residents and the expectations of family, friends and community. Still trying to figure out who they are and what they want in life, they’re torn between staying or leaving, all the while surrounded by those who never leave and the memories of those who never come back. Those left behind cling to their dreams of escape, often becoming bitter. The stifling hold of religion over the southern states is also intelligently addressed and the thoughtful script is bolstered by a strong, always reliable cast of genre veterans including Veronica Cartwright, Gary Cole, Denis O’Hare, Joshua Leonard, and likeable leads in the form of Addison Timlin and Travis Tope.
Post-Modern Horror Post-Scream Slasher Sequel Slasher The Town That Dreaded Sundown

Emily said…
Added it to my list. This remake wasn't even on my radar screen. Thanks for the recommendation!
13 January 2015 at 21:06

deadlydolls said…
Agreed all around. The small town-ness is done quite well, and the fact that each death scene gets just enough of an introduction to make its victims real people goes really far in making the film heavier than most of its ilk.
8 March 2015 at 21:22

James Gracey said…
It's also an incredibly beautiful looking film - all those sunsets and burnished landscapes. There's a strange melancholia throughout. I look forward to revisiting it soon.
9 March 2015 at 21:36