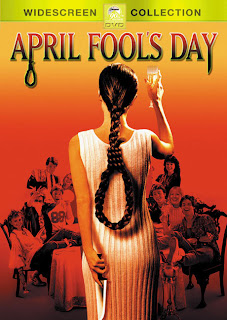 Another special-event holiday of the calendar; another slasher movie. A rather late entry to the slasher genre, April Fool’s Day still managed to carve out a neat little niche for itself within the cavalcade of slasher movies released throughout the 80s, thanks to its dark humour, likeable cast, and deft direction courtesy of Walton.

A group of teens head off to the island home of their friend Muffy St John (Deborah Foreman) to celebrate her birthday. Which just so happens to fall on April Fool’s Day. Muffy turns out to be a bit of a prankster and the house is rigged with comical and fairly harmless booby-traps. However events soon take a more sinister turn, as you would expect them to, what with this being a slasher movie and all, and eventually people start turning up dead. With a maniac apparently on the prowl and Muffy lapsing into presumed psychosis, the ever dwindling group of survivors batten down the hatches and try to stay alive until morning…

With its documentary-style opening featuring the characters introducing themselves and playing up to camera, April Fool’s Day, from the outset, is determined to undermine our expectations and openly parade its playfulness, showing us one thing and then revealing it as something completely different. The nature of practical jokes is carefully considered and the possibility that something initially intended as harmless banter can quite quickly spiral out of control is also made obvious. Even the more fun fuelled and harmless pranks have a quiet menace lurking beneath their playful sheen.

April Fool’s Day unfolds as a loving homage to murder mysteries and 'whodunits', particularly the work of Agatha Christie. One could be forgiven to half expect Jessica Fletcher to turn up. She usually does when there is a body count in soft focus.
While it sticks quite rigidly to the rules and conventions of the slasher genre, it does so in a stylish and at times, highly satirical manner. There are a number of formulaic scenes, particularly early on when various characters split up to go in search of a missing friend, and there is even a flashback to when Muffy was allegedly traumatised by a cruel prank played by her parents at a party.
The film’s inventiveness lies within this approach and the way in which it sets up particular expectations, only to pull the proverbial rug out and catch us off guard. Side-stepping gratuitous violence in favour of sly humour and digs at the horror genre, April Fool’s Day is enjoyable viewing for fans of the slasher film and despite the predictable/not predictable outcome, is not as annoying as one might imagine. As nostalgic slashers go, it's downright comforting to watch. The bloodless murders make sense when one takes into account the revelation at the climax.

The fresh cast includes a number of familiar faces such as Amy Steele (Friday the 13th Part II), Deborah Foreman (Waxwork) and Thomas F. Wilson (Biff from Back to the Future I-III). The characters, while all of the ‘slasher stock’ variety, are a likeable enough bunch and writer Danilo Bach carefully ensures that at various times they each appear implicitly responsible for the carnage. All seem to have moments of quiet, and slightly sinister, reflection. Sheryl Lee-alike Foreman turns in a darkly comic performance as Muffy, and indeed her ‘evil twin sister’ Buffy; as a young woman teetering on the brink of sanity. Initially bright-eyed and enthusiastic when her friends arrive, Muffy soon becomes subdued and withdrawn and Foreman’s twitchy performance adds another layer of sadistic glee and hint of campness to proceedings. Mainly strong performances from the rest of the cast ensure we completely buy into the fact that these friends have known each other for a long time. 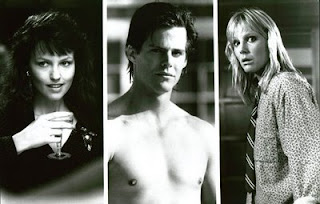 Director Fred Walton was also responsible for When a Stranger Calls (1979), a film that opens with perhaps one of the most nail-bitingly tense and creepy scenes from a seventies horror film. Whereas that film was downbeat and hauntingly bleak, April Fool’s Day is light, breezy and has its tongue wedged firmly in its cheek. With innuendo-laden sight gags peppering proceedings, it is obvious the film is not taking itself too seriously and, like its seemingly crazed protagonist, is just having a bit of a laugh. Albeit a slightly creepy and menacing laugh.

*Spoiler alert!* It is worth nothing that for years now, much talk and online forum space has been dedicated to the mysterious ‘lost footage’ that was cut from the film before its release and subsequently went missing. Apparently, once we have reached our wickedly twisty denouement, the story continues with an actual crazed killer killing off the characters one by one and this time it is not just a prolonged prank...
Amy Steele April Fool's Day Comedy Horror Deborah Foreman Eighties Horror Fred Walton Slasher Stalk'n'Slash

I would like to read your review of Scream (or the Scream trilogy), my favourite scary movie.

James Gracey said…
Hey mge,
thanks for your comment. i too enjoyed the Scream films. have you heard Wes Craven is in talks to direct a fourth film?
5 April 2009 at 17:23