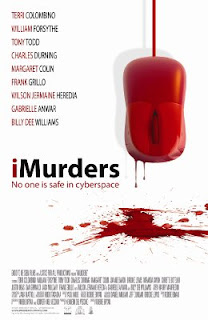 iMurders is a forthcoming horror film directed by Robbie Bryan. After a bizarre love triangle leads to a tragic shooting, the members of an online chat-room begin to fall victim to a mysterious assailant who stalks and kills them in the privacy of their own homes. The key to unlocking the savage murders lurks in the dark past of the one of the chat-room users. But will it be too late to prevent more murders?

The film stars a few familiar faces and stalwarts of the genre, including Gabrielle Anwar (Body Snatchers), Tony Todd (Candyman), William Forsythe (The Devil’s Rejects), Billy Dee Williams (The Empire Strikes Back) and Charles Durning (When A Stranger Calls). iMurders is the directorial debut of screenwriter Robbie Bryan (The Stand-In) and promises thrills, chills and many bloody spills. Behind the Couch caught up with Robbie Bryan recently for a chat about filmmaking and the sinister side of the world wide web…

How did the idea for iMurders germinate?

Well that goes back to my very first feature, The Stand-In (1999), which starred Kelly Ripa - Lou Myers from A Different World - David Ogden Stiers and Judith Ivey. Before we got distribution, I was selling copies on my company's website, www.goodtobeseenfilms.com, and I was going into chat rooms, like All My Children, which Kelly Ripa was also on at that time trying to get people to buy the film. I saw an underworld of people who considered some of their best friends to be people who they had only met online, which was weird to me. You don't always know who you are talking to and that's creepy. And I thought ‘what a cool premise for a Murder/Mystery.’ So I wrote it.


So do you think there is anything inherently sinister about the internet?

Not really, its just very impersonal and its way more accessible for people that are creepy, which is rich for horror.

What makes iMurders stand out from the other technological orientated horror movies today?

I think we focused on good characters and the human element, which is the antithesis of how I feel our technological world is leading us. 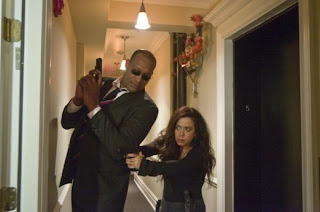 This is your debut feature as a director. How was the experience of directing your first film from one of your own screenplays?

Daunting, to say the least. Almost every day, I was working with a serious film veteran like William Forsythe, who worked on the first day of principal photography, or Gabrielle Anwar, or Tony Todd, or Billy Dee, or Charles Durning or Maragret Colin and I always had it in the back of my mind, whether or not I was worthy. On the other hand, I did SO much work in developing the film and my shot list, so a little part of me felt, ‘Yeah, you've earned this.’ But just a little part!

You’ve assembled a pretty impressive cast for such a low budget film. How did you go about this?

Yes, I was so thrilled to get this cast, much less shoot it on 35mm, with such a low budget. The cast that we got varied in how we got them. A few, Wilson Heredia, Gabrielle Anwar, Margaret Colin, Charles Durning, Jack Mulcahy and Dan Grimaldi came from producer relationships, as did Tony Todd, who I worked with on The Man From Earth (2007), and some came from just offers we made through agents. We also benefited from the fact that the WGA was on strike when we shot, leaving great actors available for work when they normally wouldn't be.

The music is composed by Harry Manfredini, the guy responsible for scoring, amongst other classic horror films, Friday the 13th, House and Slaughter High. How did he become involved with iMurders?

Harry and I had the pleasure of meeting at a Fangoria convention and I just pitched him. He’s a tremendously cool guy!

Are you a fan of horror? What do you think makes a good horror film?

Actually, iMurders is the first thing I've written that even approaches this genre, although truth be told, it has more of a suspense thriller vibe, than outright horror – it’s a fun, suspenseful, whodunnit. Horror fans have greatly embraced me on Myspace, and I hope they are kept happy too! Ironically, my first gig as an actor was in Friday 13th VIII, with Kane Hodder and I feel that horror fans are some of the most loyal and also the most forgiving. There are many horror films I love, particularly old-school ones like Friday the 13th, The Texas Chainsaw Massacre and Halloween. I also like the Saw movies and flicks like Hard Candy, which is more psychological horror, like Silence of the Lambs. I like movies that make you think and squirm, mostly. Japanese films like The Eye as well. 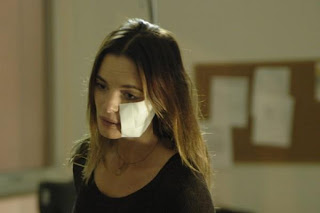 What were the positive experiences working under the constraints of such a low budget?

When you are working with a low budget, people come in with an almost theatre-like attitude, in that we all band together and make this possible. There are no trailers; actors brought mostly their own wardrobe. Plus, there is more of a collaborative process. And I think that keeps everyone excited and on their toes.

As a writer, how do you feel about handing your scripts over to other directors?

Hate it! And that's why I loved directing iMurders. My theory is that if I am not going to get a butt load of money to have someone direct my vision, I'll do it.

What is the usual process of writing for you? Any ideas or themes that you find yourself drawn to as a writer?

My process is to come up with a central idea. And first start developing characters and their traits on a yellow legal pad, and then when I am comfortable, I go into the room these characters are in and just write. Some days, it flows, other days it's not there and I put it away and come back another day. I generally like things with a heart, but iMurders was written during a very angry time, when I was mad at the world and this business, and that's how I identified with the killer. 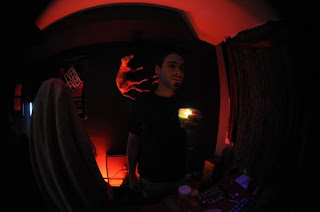 What filmmakers do you most admire and have been most influenced by, if any?

This is my least favourite question, because I feel like it's such a ‘year book’ answer, as well as a ‘look at how I went to film school’ answer. I am influenced by SO many filmmakers and how they touched me and made me want to be involved in this industry; but I like the camera work and interesting story telling of Robert Zemeckis, for one.

Can you tell me a little about your production company Good To Be Seen Films?

Good To Be Seen Films came about from a saying of my mom’s, who passed away 10 years ago. She was ravaged by MS and was completely paralyzed and when I'd go to visit her in her nursing home, I'd say, ‘Good to see you, Mom’ and she'd answer, ‘It's good to be seen.’ It's on her tomb stone. Our mission is to make quality indie films of all genres. Films I can be proud of and will still attract a mainstream audience.

What positive experiences will you bring away from directing iMurders?

What's positive is the belief that I can do this. While I am a modest guy, I’m most proud of the challenge we overcame to accomplish what we did for the budget we had. It makes me more certain that I can move on to bigger endeavours. I will make sure I learned from any mistakes I may have made and not make them next time.

What does the future hold for you? Any other projects you can tell me about?

Next up is a cool kid’s adventure movie called The Mighty Misfit Kids, and then if all goes well with the iMurders’ distribution, it is set up nicely for a sequel.

I'm always in full support of independently made horror films, and the trailer for iMurders looks pretty cool, and that is a pretty awesome cast I might add.
7 April 2009 at 19:21