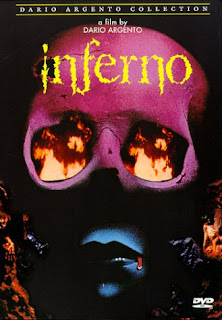 When poet Rose (Irene Miracle) discovers an old book written by a mysterious architect, she believes that the New York building in which she resides is also home to one of the Three Mothers – powerful witches who bring suffering and death to all who encounter them. She asks her brother Mark (Leigh McCloskey) to come and help her, however prior to his arrival she is stalked through the building’s labyrinthine interior and slain by an unseen, and presumably supernatural assailant. It is up to Mark to follow the cryptic clues left by his sister and solve the mystery of The Mother of Darkness, before it is too late…

Preceded by Suspiria (1977), Inferno is the second instalment of Argento’s only recently completed Three Mother’s trilogy - Mother of Tears (2007) is the final film.
In Suspiria, we are introduced to the notion that three powerful witches, residing in different parts of the world, ensure that hopelessness, sorrow and death hang heavy upon those souls unfortunate enough to encounter them. Inferno fleshes out the idea a little further by naming the witches, disclosing their whereabouts (Freiburg, New York and Rome) and providing more lurid details about the architect, Varelli, who designed and built their monstrous abodes. Mark’s endeavours to find out what happened to his sister are aided by a number of clues she left on a scrap of paper – clues she found when leafing through the pages of the sinister and ancient tome.

Inferno is a somewhat convoluted yet minimalist story structured around numerous set pieces and a dreamlike narrative. It takes its time to unfold and does so in the most languid manner – which only adds to its sinister otherworldliness. Boasting an incredible neo-Gothic look, the film drips with vivid colours and lurid lighting. The look of the film really enhances the dreamlike quality of the story and the complete lack of logic as events unfold. Everything is bathed in warm ambers, stark blues and blood-kissed reds. Characters wander around the vast interior of the creepy house in a somnambulistic state: all wide-eyed and aghast. Rooms exist where they, logically speaking, should not. Take for example, the flooded ballroom Rose discovers on her first moonlit perambulation into the basement, seemingly suggesting that the house’s foundations are nothing but water. As well as not making any sense, this scene also provides the film with one of its most memorable and ethereally beautiful moments. Dropping her keys into a puddle in the basement, Rose bends to retrieve them and her whole arm disappears into the puddle. She realises there is a whole other room beneath her: a flooded ballroom that contains a huge portrait of the Mother of Darkness. Floating through the uncanny space Rose, and we, are jolted out of a dreamlike trance by a rotting corpse that bobs into view from the murky depths. 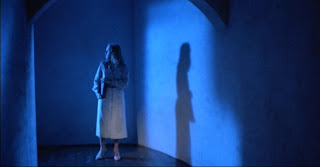 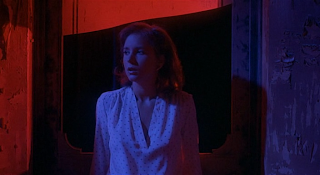 Despite the fiery connotations of the title, Inferno spews forth a multitude of images of water: Mark’s odd dream about water lapping on a disserted shore, the spooky ballroom submerged in water, the bookshop owner’s watery demise in Central Park and the many shots of trickling rain and rippling puddles that are sprinkled throughout the film.

Like Suspiria before it, Inferno also possesses an eerie fairytale quality. Rose and Mark seem rather naïve and child-like and resemble a grown-up Hansel and Gretel as they follow the breadcrumbs of clues throughout the house. Their nemesis after all, is a wicked witch who wants to destroy them.

Whereas Suspiria had a blood-curdling and ominously pulsating score by Goblin, Inferno’s score comes courtesy of Keith Emerson and resembles a psychedelic space-opera. The soundtrack also uses a number of pieces by Verdi to astounding effect. When Sara takes a taxi to the library in Rome to search for a copy of 'The Three Mothers', our ears are blasted by a synthesized rendition of Nabucco in a 5-4 time arrangement. Delirious. A later scene features Sara and Carlo (Argento regular Gabriele Lavia), being menaced by an unseen force in her apartment during a power cut: as the lights flicker on and off, Verdi’s Chorus of Hebrew Slaves comes in short, sharp and utterly unnerving blasts as the tension mounts and the blood flows. 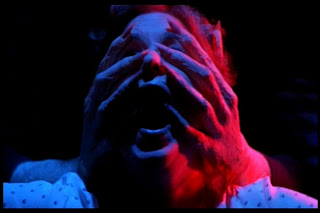 The cast are essentially ciphers to further the wandering narrative and provide victims for the evil witch and her minions. Playing a similar role to the part she played in Suspiria (Miss Tanner), is Alida Valli as a fiendish housekeeper. Also putting in an appearance is Daria Nicolodi (Argento’s partner at the time) as the Countess Elise, a nervous woman in poor health whom Rose befriends. Nicolodi provides the film with a rather memorable death as she is torn to ribbons by deranged cats in a creepy attic. Critics have often noted that it is possible to chart the disintegration of the relationship between Argento and Nicolodi through the films they made together. Aside from Deep Red (1975) and Tenebrae (1982), Nicolodi was slain in progressively nasty and ever more elaborate ways under Argento’s direction in subsequent films.

With Inferno, Argento does what he does best: creates an engrossingly atmospheric, highly stylised and utterly illogical tale of rapturous death and violence. The follow up to Suspiria is perhaps my favourite Argento film and certainly one of my favourite horror films too. It retains its bewitching and mesmerising power even after repeated viewings.
Aside from the work of David Lynch, it is perhaps one of the only films to ever fully capture and convey sheer nightmare logic onscreen. And it does so in the most startlingly beautiful way.
Dario Argento Eighties Horror Horror Film Review Italian Horror The Three Mothers Witchcraft

Matt-suzaka said…
I have seen a lot of Argento's work (even a good amount of his newer stuff) and love most of it.

For whatever reason Inferno has unfortunately never made it into my VHS/DVD player, and I have always really wanted to see it. Your wonderful review makes it sound like I really need to see it as soon as possible.

James Gracey said…
Matt - I urge you to check it out! It was one of the very first Argento films i ever watched, way back when. Still contains some of his most unforgettable imagery. Would love to know what you think of it. Enjoy. :P
22 April 2009 at 11:20

Terence said…
Have you seen Luigi Cozzi's incredibly rare unofficial third entry to The Three Mothers? It's titled "Demons 6: De Profundis" or "Edgar Allen Poe's The Black Cat". It's hilariously bad but definitely worth the look! I personally think it's better than Mother of Tears (probably because it is somewhat original).

James Gracey said…
Terence thank you SO much for that link!! I actually haven't seen Cozzi's The Black Cat, but am well aware of its existence, and up until now have been unable to track down a decent enough copy. That's my viewing pleasure sorted out for this evening then! Thanks again.

Terence said…
No worries James! Tell me how it went! Yeah, this film is ridiculously hard to find because the original film strip is lost so making good DVDs would be out of the question. I think there is a higher quality version on Netflix but of course, only Americans can watch it.

Nevertheless, this Japanese VHS is still good (you can trust Japan to have all the obscure films that never get released elsewhere like Etoile).
5 April 2012 at 23:44