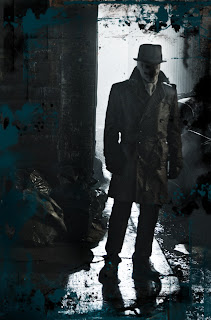 As I sat in the cinema last night, thoroughly enjoying the spectacle of Watchmen as it unflinchingly flickered across the cinema screen, I was struck by a number of striking similarities between the character of Rorschach and the masked killer from Mario Bava’s stylish horror thriller from 1964 - Blood & Black Lace.

Rorschach, a troubled vigilante, shares an undeniable visual companionship with the killer/s in Blood & Black Lace, spurned to bloody action by greed and lust.

Killers in giallo films usually boast a host of repressed anxieties, often stemming from some trauma they had previously suffered, or from distinctly Freudian sexual anxieties.
Not only sharing visual similarities, the darkly troubled Rorschach also shares a few psychological traits with many a killer from the Italian subgenre. His character’s particular flashback scenes wouldn’t be out of place in any rudimentary giallo film: physical abuse, neglectful parent and shades of Oedipus all flashed across the screen in increasingly disturbing and telling ways.

The giallo-esque iconography and idiosyncratic traits of Rorschach contain the same highly fetishistic and sexualised connotations of many devious giallo killers. Their wardrobes and twisted psyches convey the same weighty issues and psychological scarring. Of course I am not saying that such similarities are at all deliberate or even significant – I merely thought a couple of interesting parallels ran between Rorschach and a number of murderers featured in various giallo films, particularly Blood and Black Lace. 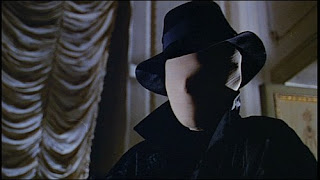 The significance of the mask in Blood & Black Lace of course, is that its blankness tentatively suggests that anyone’s face could be lurking beneath it – the killer could be anyone and anyone has the potential to become a killer… That, and the fact that it looks genuinely unnerving. This contrasts of course with the significance of Rorschach’s mask, in that his projects a subconscious interpretation onto the otherwise phantom-blank features. The tidily symmetrical shapes belie the contorted mindset that lies beneath the blankly shrouded face – their existence conveyed only in the constantly shifting ink-blot patterns that adorn the mask.
His psychoanalytical constructs are projected for all to see, whereas the killer in Blood & Black Lace has a morally blank expression - cold and absent of features.

A similar garb to Rorschach’s is also customised by the killer in The Bird with the Crystal Plumage (1970) – Dario Argento’s debut film. The troubled killer in BWTCP has undergone a disturbing psychological transfer instigated when she viewed a painting that was inspired by a sexual attack on her when she was a young girl. Glimpses of details of the painting stand in for disturbing flashbacks.

The same dress code is utilised by the deranged murderer in Argento’s quintessential giallo shocker Deep Red (1975), in which a killer plays a particular lullaby while bumping off psychics in order to cover up, and recreate, a previous murder.
Indeed, this fetishistic get-up also features fleetingly in Argento’s immensely entertaining Phenomena (1985) – a paranormal fantasy-horror film with distinct giallo trimmings. The two killers in this film are a disturbed woman who was raped and tortured when accidently locked in a hospital ward for the criminally insane, and her utterly deranged son. He kills young women at a boarding school, while she kills to protect him and prevent anyone from figuring out his identity.

The fact that Rorscach takes his name and mask from the ink-blot tests designed by Bernard Rorschach and based on the psychoanalytic concept of object relations, is also obviously significant for its psychological connotations. Watchmen creator Alan Moore’s inspiration for Rorschach came from Steve Ditko’s DC Comics creation, The Question – an objectivist and philosophical crime fighter. Ditko in turn was influenced by several similarly composed characters from 1930s comics such as The Blank from Dick Tracey. Obviously none of these characters share anything in common with Bava’s featureless villain, except in appearance. Perhaps it was Bava who took the inspiration for his Blood & Black Lace killer from these sources. Bava certainly would have been familiar with the world of comics having adapted Danger Diabolik in 1968. 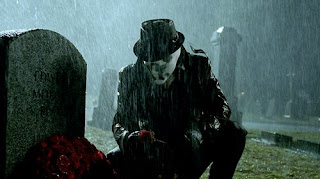 Rorschach’s outlook on the morally corrupt world he exists in is as black and white as his mask. His unwillingness to compromise ensures his fate is sealed and he will not outlive his fellow Watchmen. Rorschach takes moral absolutism to its most violent extreme – this same moral absolutism is subverted by the killers in Blood and Black Lace and indeed the misfit killers of many a giallo film: highly uncompromising individuals with a warped view of reality and one fixed goal - the realisation of their own moral outlook.
Blood and Black Lace Giallo Mario Bava Rorscach Watchmen

Anonymous said…
A very interesting article James, and not just because I'm a comic gook. Some very interesting parallels in your comparisons of the Mario Bava characters and Rorschach. Great work!
16 April 2009 at 16:26