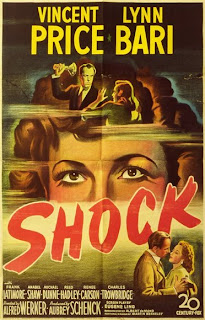 After witnessing a brutal murder from her hotel room window, Janet Stewart (Anabel Shaw) falls into a state of catatonic shock. When she awakens, she discovers she is being held in a private hospital and treated by the sinister Dr Cross (Vincent Price), who she realises is the man she saw commit the heinous murder!

Shock is not just an ‘old dark house’ type thriller with a creepy psychiatric hospital and a two dimensional villain. Its twisted and slyly subversive story, in which a perfectly sane woman is made out to be insane so her accusations of murder are not taken seriously, unravels as a tightly constructed and provocative little chiller.

Janet seems quite frantic and preoccupied from the moment we meet her. She forgets to pay her taxi driver as she rushes into the hotel where she is to meet with her estranged husband. We learn that she was wrongly informed of his death in the war, and that he is actually still very much alive but had been a prisoner of war. She is overwrought with desperation to see him again. Her night is sleepless, and after a particularly surreal and unnerving nightmare, in which her husband calls to her from behind a giant door she can’t open, she paces her hotel room and gazes out of her window; eventually witnessing the murder that puts her into the titular shock. When her husband arrives, he finds her in a disturbing catatonic state. 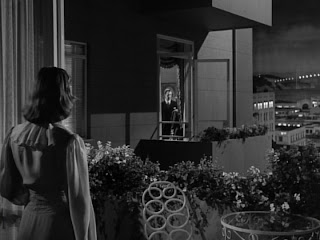 The film, shot in 1946, briefly touches on post-war stress and the strain and tribulation many families felt due to not knowing if their loved ones at war were alive or dead. It is revealed Janet’s husband, Lt. Paul Stewart (Frank Latimore) was a prisoner of war, hence his not returning straight home after the war ended and her understandable urge to see him again.

When it is suggested that Janet be treated in a private hospital, ‘just outside of town’, and her psychiatrist, Dr Cross, is revealed to be the man she saw murder his wife, the stage is set for a compelling story. Price’s calm tones have an undercurrent of menace and merciless precision. His handsome and sad features belie the atrocious act he carried out in a fit of passionate rage. The plot thickens when Cross’s mistress whom he was arguing with his wife about, turns out to be his assistant at the hospital. Elaine (Lynn Bari) is portrayed as the driving force behind the dark plans, she comes across as something of a Lady Macbeth, manipulating the increasingly distraught Dr Cross. Price conveys Cross’s predicament effortlessly, playing the doctor as someone constantly drifting out of his depth into increasingly sordid territory he feels he has less and less control over. A great deal of time is spent following his particular strand of the story and we come to realise that he killed his wife in a sudden burst of rage, but it was essentially an accident and he was convinced not to go to the police by Elaine. It is also Elaine who suggests they drug Janet and try to worsen her fragile state by constantly unnerving her and pushing her further towards the bleak caress of insanity. 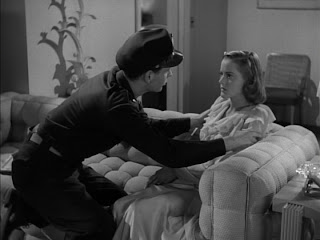 During a particularly moody, if somewhat rudimentary sequence, one of the other patients escapes from his room during a raging storm. Sneaking into Janet’s room he is apprehended by Elaine and a struggle ensues. Janet awakens to find the patient attempting to throttle Elaine and when he is apprehended by a group of doctors, her ravings about the murder she witnessed are assumed by all, to mean the attack on Elaine. It’s a clever, if contrived twist that ensures her story remains disbelieved by all she tries to convince. They believe her to be utterly delusional now.

Meanwhile Cross has staged his dead wife’s ‘accidental death’ at their lodge even further outside of town, but Janet’s pesky husband and his insistence on a second opinion sets off a chain of events that reveal Cross as the murderer Janet always said he was…

We KNOW that Dr Cross murdered his wife, so the tension is created around the fact that no one believes Janet’s story – she is utterly alone and helpless and essentially at the mercy of Cross and Elaine. There is a decidedly uneasy scene after Janet has been committed as Cross and Elaine stand menacingly over her bed as she sleeps. Anabel Shaw is convincing as Janet, her panic and frustration is nicely evoked in the scene where she attempts to leave the hospital and is apprehended by an orderly who assumes she is unwell and raving. Her pleading falls on deaf ears and she is patronised into returning to her room and further sedated. 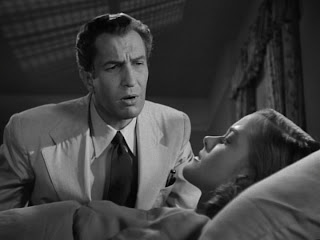 The film is most effective in its depiction of the treatment administered to a perfectly sane woman – these are quite distressing and uncomfortable and retain a quiet power. The moment where Cross leans over Janet and calmly tells her that she is losing her mind as she weakly protests, and just maybe begins to believe him, is a considerably chilling one.

A neat and nasty little thriller that boasts an early role for Price, whose suavely sinister and tortured performance throughout the film, is the kind he became famous for.
Alfred L. Werker B-Movie Forties Horror Psychological Horror Shock Vincent Price

Unknown said…
A criminally under-appreciated gem, with an unusually subtle and nuanced performance by Vincent Price.
8 October 2009 at 02:53