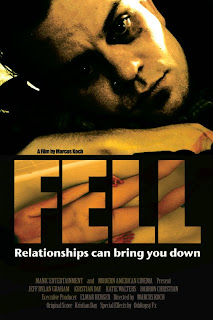 Devastated by his breakup with Jenny, a manic-depressive and heavily medicated Bill rapidly descends into a hellish world in which the lines between reality and blood-fuelled nightmares become increasingly blurred. Bloody visions, ghosts from the past and bodies in the bath all conspire to push Bill ever closer to breaking point…

Opening with a fractured series of shots of Bill sopping blood off the kitchen floor and listening to a radio whilst in a seemingly catatonic state, Fell starts as it means to go on: nightmarishly, hazily and disorientatingly. Koch films such mundane actions and activities as Bill cooking eggs, shuffling around the house, talking on the phone and sleeping on the couch so that they seem ripe with an undercurrent of dread. They take on a hellish, threatening glean and are filmed in tightly constructed close-up shots which better serve to thrust us further into Bill’s rapidly fraying mindset.

The script, co-written by the cast (Katie Walters, Kristian Day and Jeff Dylan Graham), doesn’t shy away from a realistic, somewhat grubby depiction of a man suffering from mental anguish, heavily medicated, languishing alone in his home, ever-spiralling into hopeless depression. His restless routines and lying around flesh out his purgatory existence. Fell is not always comfortable viewing – some viewers may find it too wallowing or relentlessly grim - but it is always engrossing. At the dark heart of the film is a compelling performance by Jeff Dylan Graham as Bill. Graham appears vulnerable and eventually desperately unhinged, and whether he is lying on the kitchen floor tightly clutching a transistor radio, sleeping through the day on his couch or seething with inarticulate rage, Graham’s stark and raw performance ensures we feel for Bill. Are these horrors real or imagined? The product of a fevered, drugged up mind, or the result of bloody rage? Either way, our unreliable narrator is one we grow to care for throughout his dark descent into psychological chaos. 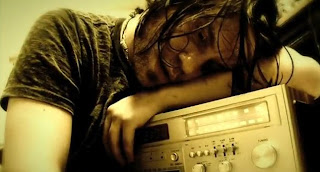 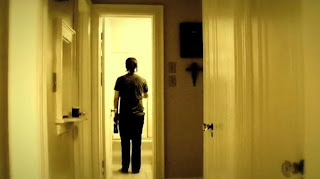 The production design proves effective too, as Bill’s initially just comfortably messy home, strewn with personal possessions and homely bric-a-brac soon spirals into squalor, becoming more claustrophobic and ominous. The film’s obviously low budget actually works in its favour – the digitally shot grainy images enhance the gritty realism Kock strives to attain. The one location is utilised to dramatic effect – the viewer soon becomes as imprisoned within its walls as Bill is. Snow-coated flashbacks of Bill and a friend 'snow-angeling' on the lawn provide cool respite from the stifling confines of his house. A cautious descent into his basement when Bill hears groaning serves as one of the more taut and intense moments in the film, as composer Kristian Day’s echoic and discordant electronic noise-scape slow-burns and ignites to match Bill’s mounting paranoia.

Fell is a challenging, relentless exploration of psychological turmoil, the fragility of the human mind and a startling depiction of tragic mental breakdown that evokes memories of Polanski’s Repulsion. There may be one or two nods to Taxi Driver, but whereas Travis Bickle took his psychological turmoil out into the streets, Fell’s Bill stays indoors to quietly, broodingly implode within his dark dreams and shocking visions.

Anonymous said…
Ooooo...I really want to see this one. I am fascinated by the workings of the human mind and psychology. I knew someone once who was a sociopath. Had no conscience, no remorse, no empathy.
Great review
Dreaded Dreams
Petunia Scareum
28 July 2010 at 05:36