Matthew Coburn is a young man who would like nothing more than to stay young and attractive forever. On the eve of his 30th birthday, he invites David, a random guy he meets in an online chat-room to his home. In the middle of the night, Matthew wakes up to find himself alone. Or is he? He soon begins to realize that someone, or something, is lurking in the dark in his home. Is it David? Or someone else, skulking in the shadows? As Matthew is plunged into a waking nightmare, he comes to realise that the price of vanity is high… Very high.

‘Has your past ever come back to haunt you?’

Nightshadows was produced the same year as Hellbent - the first gay slasher film. With its cast of gay characters falling victim to a ripped, devil-masked psycho, that film had fun queering the usual conventions of the slasher film, while also sticking quite rigidly to them. Nightshadows, a dark tale of obsession and guilt, follows no such rules or conventions. What director Seaton is really concerned with is weaving together a number of elements to create an atmospheric, suspenseful and strikingly shot film. This short begins as it means to go, full of sinister foreboding and implied threat, as two men hooking up for sex briefly exchange pleasantries before discussing the dangers of meeting people from online chatrooms. They both comment that the other could be a killer, waiting until the other falls asleep before striking...

“You don’t know anything about me. You’ve invited a complete stranger into your house. I could be a serial killer, using the internet to find my victims, getting them to invite me to their houses. And then killing them in their sleep. You never know." 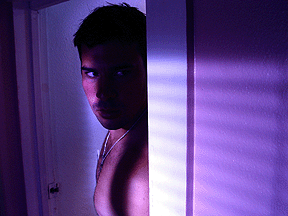 The thrill of intimate courtship and the anonymity of a one night stand is exploited to create an uneasy atmosphere, in which the audience are fed just enough information to know that something isn’t right and this is a tale that is not going to end well. When Matthew awakens to find himself alone, in much the same way as John Carpenter's Halloween did, Seaton’s film also effectively conveys the terror of having the safety and sanctity of one’s own home invaded by an outside force. The lighting is incredibly atmospheric and recalls moody, shadowy locations from Val Lewton’s quiet 40s era chillers such as I Walked with a Zombie and Isle of the Dead. The soundtrack boasts an eerie wind that moves through the apartment, and even renders the usually comforting sound of wind chimes ominous. As Matthew wanders around the dark apartment, Seaton films the increasingly claustrophobic events from around corners and reflected in mirrors, as the shadows on walls constantly move and dance about, and the dark figures closing in on Matthew begin to gradually reveal themselves: all white eyes, rippling-torsos and slit throats. Come the revelation and the full realisation of why Matthew is being pursued by these figures, the tension becomes unbearable and Seaton creates a number of immensely creepy images. 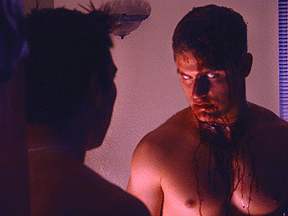 A highly atmospheric, suggestive and downright unsettling film, Nightshadows explores madness, guilt, obsession, mortality and the downright shocking acts people carry out in the name of vanity, to haunting effect.

Nightshadows is to be screened as part of the Gay of the Dead night at the 2nd Yellow Fever Independent Film Festival in Belfast on Saturday 28th August.
Gay Horror Film Ghost Story LGBT Psychological Horror Revenge Short Film

panavia999 said…
This sounds like a good double bill with "Cruising". That is if a person wanted a relentlessly creepy and disturnbing evening.
13 July 2010 at 20:25

Jenn said…
This sounds really interesting. I recently watched HELLBENT with a gay friend of mine and we both found it wildly entertaining.