Goblin: Audio Imps Of The Perverse

What usually comes to mind when one thinks of the films of Dario Argento? Is it the ravishing, ceaselessly prowling camera work? The lurid, stylised colouring of his cinematic canvas? Perhaps it is the rhapsodic and fiendishly elaborate violence that perforates his morbid tales? Or the bounteous victims swirling the boundaries between bloody orgasm and sensual death throe? Chances are that no matter what the director’s name conjures up, the music that accompanies his striking images will surely rank highly in terms of what we associate with his brand of lavishly sadistic cinema.

Whilst Argento has worked with some of the most original and unusual composers throughout his career, from the great Ennio Morricone and prog-rocker Keith Emerson, to jazz musician Giorgio Gaslini and most recently, Marco Werba, his most distinct musical collaborations have without a doubt been with psych/prog-rock horror outfit, Goblin.


Argento’s long-lasting and highly distinctive relationship with Goblin began when Giorgio Gaslini, who had worked with Argento on Door Into Darkness and The Five Days of Milan presented his somewhat jazzy score for Deep Red and Argento was dissatisfied with it. The director wanted a score that he felt would reflect how progressive he believed the film to be. He turned to up and coming prog-rock outfit Cherry Five, headed by Claudio Simonetti and Massimo Morante. Heavily influenced by Pink Floyd, King Crimson and early Genesis, Cherry Five were challenged to score the film in one night and record it in one day. They changed their name to Goblin and rewrote most of Gaslini’s score, including the famous main theme. When it was released the film, and indeed the soundtrack, were huge hits both in Italy and abroad and horror movie history was made.

The band would go on to score Suspiria and Dawn of the Dead respectively, proving once again that they were the darlings of the horror soundtrack world in the late Seventies/early Eighties. Unfortunately, despite their success, the band was rife with personal strife and the line up was perpetually changing. The original members of the band consisted of Claudio Simonetti (keyboards) and Massimo Morante (guitars), and they were usually aided by Fabio Pignatelli (bass guitar) and Walter Martino (drums). Throughout the years however, members came and went but what was left of the band continued to work mainly on soundtracks. There was a partial reunification for Argento’s Phenomena and Tenebrae, though the musicians were credited separately, and not as Goblin. The sound they produced of course was Goblin through and through in everything but name. The last collaboration with the master of Italian Horror took place in 2000 when the original members reformed at the director’s behest to score his contemporary giallo and much heralded ‘return to form’, Sleepless.

It is hard to imagine that Argento’s earlier classics such as Deep Red, Suspiria and Tenebrae would wield anywhere near the same amount of power they do were it not for the music contributed by Goblin. Here’s a look back at some of their best moments… 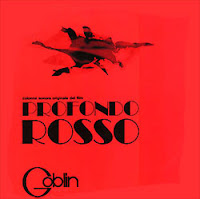 Deep Red: Goblin’s throbbing, bass-heavy, pulsating organ score incorporates elements of prog-rock, jazz and a touch of gothic punk, effortlessly complementing the beauty and disquieting nature of the imagery conjured by Argento. The pounding piano riff, which would in no small way inspire John Carpenter when he came to score his own movies – most notably Halloween – is mesmerising in its hypnotic rhythm and seemingly whips the killer into a frenzy as much as the baying audience. A few of Gaslini’s efforts still remain in the film; light jazzy pieces more reminiscent of Morricone’s contributions to Argento’s Animal Trilogy. 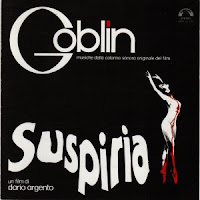 Suspiria: The mesmerising drones, twisted melodies, rasped vocals and sinisterly twinkling lullaby that creates the excessively nightmarish score of Suspiria, almost ousts the grandeur of Argento’s visuals in terms of sensory impact. Eerie winds, maniacal battering of drums and the shriek of strings builds to an almost unbearable climax before settling into the sinister tinkling of a music box lullaby – and all this before the film’s opening credits have even rolled! Discordant guitar melodies and wizened synthesizers mark a repetitive rhythm that mercilessly drives the narrative forward, consuming everything in its dark cacophony. A rough cut of the soundtrack was allegedly played full blast on the set to unnerve the actors and get them into the appropriate mood. 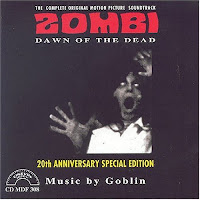 Dawn of the Dead: Dark, moody and unsettling, the score for Dawn of the Dead is one of the most evocative in horror movie history. Gloomy synths, heavy bass and a steady beat enhance Romero’s doomful tale, adding an atmosphere of hopelessness to proceedings, despite the satirical aspects of the script. Veering between kitsch Seventies appeal and stately, sombre darkness, this score is perhaps one of the band's most underrated. Dario Argento edited the international cut of Dawn of the Dead, and fully utilised the band’s compositions. Romero used three pieces of their score in his version, preferring to score the movie with generic stock music, thereby adding an element of humour (absent from Argento’s cut) to the film. 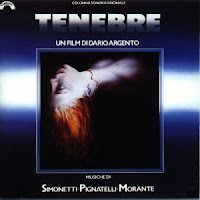 Tenebrae: Heavily reliant on synthesisers and electronics, the score for Argento’s self-reflexive deconstruction of the giallo movie, is credited to the band members separately – Goblin had essentially split at this stage. Getting rhythmical with a vengeance, Tenebrae’s soundtrack exhibits dance floor-filling Italo-disco grooves, boasting delirious organ riffs, rolling drum beats and vo-coded vocals, to foot-tapping, nerve-throbbing effect. In the scene where Tilde yells at her girlfriend to turn off the music, which we had assumed was merely the soundtrack of the film (and had been enjoying immensely!), Marion reluctantly crosses the room and lifts the needle from her record player stopping both diegetic and non-diegetic music instantly. Bloody chaos ensues.
Dario Argento Film soundtrack Goblin Italian Horror music Score