Rejected by the Devil - An Interview with Bill Moseley 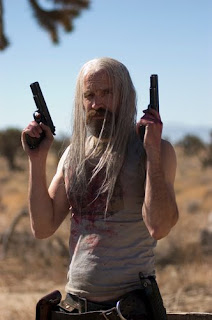 Bill Moseley is no stranger to portraying psychotic redneck ‘hellbilly’ types, having breathed life into several of the most memorable and downright nasty horror movie characters in recent memory - including the deranged Chop-Top from The Texas Chainsaw Massacre 2 and the mercilessly sadistic Otis Driftwood from Rob Zombie’s The Devil’s Rejects and House Of 1000 Corpses.

With the release of Tim Sullivan’s 2001 Maniacs: Field Of Screams, Moseley looks set to add yet another barnstorming oddball to his already engorged menagerie of freaks.

Head over to Eye for Film to check out my interview with Mr Moseley, in which he discusses his career to date, including his latest role in 2001 Maniacs: Field Of Screams, as well as his love for horror movies and how he deals with playing such usually very dark and disturbing characters.
2001 Maniacs: Field Of Screams Bill Moseley House Of 1000 Corpses Interview The Devil’s Rejects The Texas Chainsaw Massacre 2

WriterME said…
Time for fangirl squeals on my part; I love Bill Moseley, first and foremost in his work with Rob Zombie.

James Gracey said…
Hey Madelon,
He was lovely! Very friendly and as big a horror nut as I am.