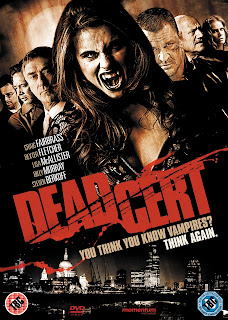 2010
Dir. Steve Lawson
Tough gangster Freddie ‘Dead Cert’ Frankham (Craig Fairbrass) and his gang get more than they bargained for when a group of mysterious businessmen make an offer to buy their club, the Inferno. Unbeknownst to Freddie, the club stands on the former site of a Black Church, established as a temple of evil in the 17th Century by a Romanian warlord-turned-vampire known as The Wolf (Billy Murray). The businessmen, headed by The Wolf aka Livienko, are actually vampires hell-bent on rebuilding their empire of evil on its original, unhallowed site. Freddie and co are about to realise they’ve bitten off more than they can chew by refusing to sell. There will be blood… Lots of blood.

The second feature from director Steve Lawson (Just For The Record), is a vampires-meet-gangsters horror romp that stands alongside recent British vampire flick Beyond the Rave as a slick, modernised take on the genre, that goes some way to evoke the spirit of such contemporary-set Amicus and Hammer titles such as Dracula A.D. 1972 and The Satanic Rites Of Dracula. An intriguing blend of the vampire and Cockney gangster movie genres, Dead Cert promises much, and it mainly delivers the goods. Combining the standard ingredients of both genres and assured enough to take itself seriously, it also benefits from its a seasoned cast of familiar British acting talent including Dexter Fletcher, Lisa McAllister, Dave Legeno, Jason Flemying, Janet Montgomery (The Hills Run Red) and, in a sly, fleeting cameo, Mr British Horror himself, Danny Dyer. 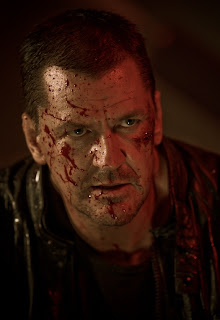 Populated by tough characters more akin to what you’d find in a Guy Ritchie flick, Dead Cert plunges us into a London underworld of illegal betting, underground fighting and the cut-throat denizens who inhabit it. No one messes with this lot. Instead of taking the From Dusk Til Dawn approach by essentially switching genres halfway through, Dead Cert takes the gangster route but throws in a few creepy moments here and there to let us know that something sinister is lurking in the wings; a knowing look here, an entranced victim there. The vampires, when we eventually see them in all their g(l)ory, are of the more traditional fare: they can glamour their victims, are averse to holy water and ‘white blooming’ plants and they drink the blood of the living for sustenance.

While it takes the gangsters a while to figure out who exactly they are up against, the audience are privy to this information from the get-go. The inclusion of Van-Helsing-like harbinger of doom Mason, who tries to warn the men about their new adversaries, is a canny vintage throwback but works well enough within this context too. Steven Berkoff channels the late Donald Pleasance in his portrayal of the tortured man trying to right past wrongs and keep the eviiiiil Livienko out of London. 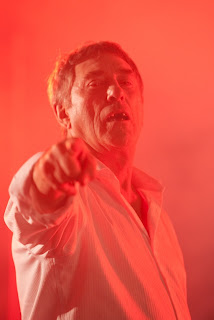 Writer Lawson works an interesting vampire mythology into the back-story of these characters incorporating aspects of British history, which really helps give the film some substance. Livienko (The Wolf) was flushed out of the city by emissaries of the Vatican during the Great Fire of London, and since then has been exiled in mainland Europe. Now he has returned with his undead disciples to continue his diabolical plans to expand the legions of the undead and overcome mankind. So naturally, he needs a gentleman’s club built over an ancient Black Church as a base from which to conduct his eviiiil schemes.

Lawson fleshes out his characters and gradually reveals their various motivations – honourable and otherwise. The kinds of ‘values’ usually upheld in the world of organised crime are scrutinised and subverted – the idea that family and honour are no longer as important as the likes of business and money lends proceedings an air of bleak hopelessness. Yet Lawson still presents the protagonist as a father-to-be, who does the dodgy things he does in order to ensure his wife and baby will be better off. The figure of the vampire as a threat to all this harks back to Stoker’s ‘Dracula;’ indeed aspects of that particular mythos are woven through this tale too, particularly in the bizarre pseudo-psychic/dream link Freddy shares with Livienko – and the disturbing nightmares he experiences when he begins his dealings with the man. 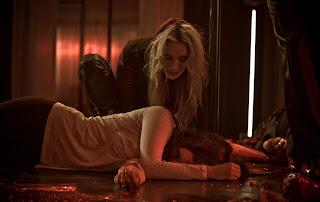 The taut climax is suitable bloody, unfolding in a face-off between gangsters and vampires in the red-lit, lurid nightclub, appropriately named Inferno; complete with a bevy of pole-dancing, scantily-clad and be-fanged ladies of the night.

Produced by horror specialists Black & Blue Films and recalling the previously mentioned Hammer classics, as well as later vampire movies such as Vamp and The Lost Boys, Dead Cert was selected for the opening night of the FrightFest horror film festival and will be released on DVD (£15.99) by Momentum Pictures on 27th September 2010. Special Features include: audio commentary; ‘Making of’ featurette.

Andrew said…
This one sounds interesting....
I've always liked vampire flicks that come from the other side of the pond.
23 September 2010 at 20:47

James Gracey said…
It is nay bad, Andrew - an enjoyable flick. I actually preferred it second time around.
24 September 2010 at 09:57