Love Goddess of the Cannibals 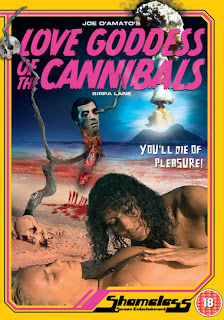 A team of geologists attempt to remove a native, allegedly cannibalistic population from their island home in order to perform atomic research. The natives' leader has other plans though, and sets about disposing of them one by one, utilising the fine art of seduction and good old fashioned murder-by-sexy-sex to aid her quest.

Papaya (Melissa) is just your average voodoo priestess, eco-activist and blood crazed cannibal, willing to do whatever it takes to keep her tropical island home from being exploited by pesky nuclear scientists hell-bent on building a nuclear reactor on it. And if that means stripping off her clothes every five minutes and seducing them one by one, then killing them by castrating them - so be it! This is one dedicated woman who won’t be messed with.

The film opens with Papaya emerging from the sea, strutting across the beach, entering a palm-hut, smearing fruit over a man in a sexy way before biting off his penis and watching as her henchmen (who look like they’d be equally at home on the floor of a Seventies New York disco) torch the hut. Next up we meet Sarah (Sirpa Lane) a roving reporter holidaying in the sun, who just happens to bump into her old ‘acquaintance’ Vincent (Maurice Poli), who is on the island to install a nuclear reactor. For some reason. Scientists, eh? He’s also looking for his missing scientist buddy (Papaya’s victim from the opening scene). Before long the two are busy getting reacquainted, which mainly consists of their clothes falling off, them taking showers together and partaking in copious amounts of sex. While exploring the island they encounter Papaya who invites them to a strange ritual where they’re drugged and overcome by the urge to undress. Again. It eventually becomes clear that Papaya and her people don’t want a nuclear reactor on their beautiful island and she’s making sure it won’t happen by killing off all the scientists with sexy, deadly sex. Naturally Vincent falls for her while Sarah also shags her way around the island in search of a juicy story. 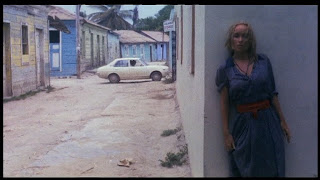 Love Goddess of the Cannibals, or to call it by its original, somewhat less lurid title Caribbean Papaya, is something of a long lost ‘Euro cult classic’ from the ever-warped mind of Italian sex, sleaze and horror maestro, Joe ‘exploitation’ D’Amato. In a highly kitsch riot of infrequent bloody mutilation, copious lesbian sex scenes and a hypnotic tribal score courtesy of Stelvio Cipriani, Love Goddess takes its viewers on a delirious trip into jungle-infested sleaze, violated flesh and writhing orgies of sex, death and innards. Essentially a soft-core erotica flick, Love Goddess includes a number of ‘horror’ elements to add to the exploitation quota. These pepper the film sporadically and include a castration, a human sacrifice and a shot of a man eating said human sacrifice’s still beating heart. There are also scenes featuring a cock fight (no, not THAT kind of cock) and butchered pigs being split open; their insides tumbling out. The rest of the film’s running time is made up of expository scenes in which characters spout at times hilarious badly-dubbed dialogue about nuclear reactors, the environment and how they love to be naked, and sex scenes in which stars Melissa and Sirpa Lane (star of Walerian Borowczyk’s controversial cult classic The Beast, and its deliriously kitsch sequel, imaginatively titled The Beast in Space) shag their way through the cast before eventually sleeping with each other on a utopian beach, complete with coconut trees and a roaring surf. In soft-focus. 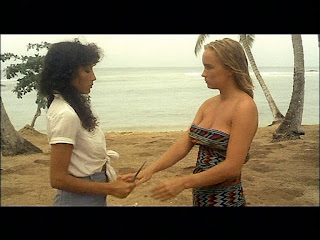 D’Amato does manage to muster a fair degree of tension and eerie atmospherics in some of the scenes in which Vincent and Sarah explore the seemingly deserted village – and in the scene where Sarah is chased through the village by a group of young boys. Those expecting a gory cannibal fest will be bitterly disappointed though, as the film boasts about as much horror quotient as its cast boast the ability to remain dressed throughout a scene. Those who are open to kitsch erotica with an irresistibly funky soundtrack and a penchant for stylishly shot scenes of Seventies sex scenes might be more satisfied with what’s on offer here.

Shaun Anderson [The Celluloid Highway] said…
Its probably impossible for me to dislike a film with a title like'Love Goddess of the Cannibals', I'll be checking this out!
19 September 2010 at 15:24

The Vicar of VHS said…
Sounds like a wild one indeed! I enjoyed Sirpa Lane's "performance" in both Walerian Borowczyk's La Bête and Alfosno Bresci's only slightly sensical sci-fi cash-in on the same, The Beast in Space. Definitely have to keep an eye out for this one. :)
20 September 2010 at 14:14

James Gracey said…
Ahh, sounds like you're quite familar with the work of the versatile Ms Lane! After seeing the trailer for The Beast in Space, I really want to check it out - looks suitably trashy. I'm sure you'll get a kick out of this. The theme music is STILL in my head, days later. That's a good thing, right? :o/
21 September 2010 at 10:40