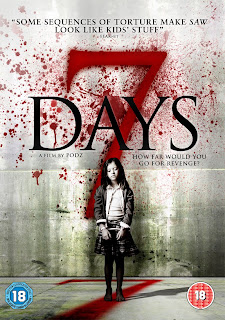 Middle-aged surgeon Bruno Hamel (Claude Legault), his wife Sylvie (Fanny Mallette) and their eight-year-old daughter Jasmine (Rose-Marie Coallier) live a happy, uneventful life in the suburbs of a quiet town. When Jasmine is brutally raped and murdered by a local man, Anthony Lemaire (Martin Dubreuil), Bruno hatches a meticulous plan to make him pay for his crimes. He will kidnap and torture Lemaire for seven days before executing him and then turning himself in…

Directed by Daniel Grou (Vampire High, Big Wolf On Campus, The Hunger), aka Podz, and adapted for the screen by author Patrick Senécal ('5150 Elm’s Way,' 'Evil Words') from his best-selling novel, ‘Les sept jours du talion,’ 7 Days is an intense and disturbing French Canadian thriller that has been described as 'Saw directed by Michael Haneke (Funny Games) or Lars von Trier (Antichrist).’ Coldly filmed in a stylish, yet detached manner, 7 Days is a harrowing and powerful film, but it is also a startlingly quiet film; the complete absence of music focuses and heightens the impact during the scenes of brutality and drama. Well acted and subtle to begin with, the later scenes of torture leave nothing to the imagination and after the discovery of the daughter’s dead body - filmed in a starkly matter-of-fact way – the film opens itself out into an ongoing debate about morality, human instinct and the overwhelming power of grief. 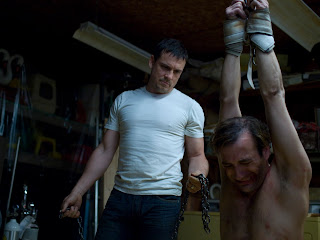 The ‘spanner in the works’ – any doubt as to the alleged killer’s guilt – is removed early on, and we are told pointedly there is no doubt at all regarding his guilt. This still isn’t enough to remove grey areas though – human rights are called into question, as is society’s bloodthirsty need for revenge and violence. Does Lemaire deserve this treatment? Does he deserve to be shown mercy? The script doesn’t really make any obvious attempts to colour his character or do anything which may make us feel for him – he is simply presented as a child killer and the audience are left to trawl through their reaction to his treatment. At times this is made all the more difficult because of how Lemaire reacts to his torture. He goads Hamel, and eventually reveals his own sorry back-story involving years of abuse and pain. A brave move on the filmmaker’s part, though arguably a manipulative one. Viewers are almost defied not to flinch during the scenes of torture in which Lemaire is whipped with a chain until he passes out, has his leg bludgeoned with a sledgehammer and is then forced to stand on his other leg with a noose around his neck, or wallow naked on the concrete floor in his own filth and blood. One cop asks why they should bother to try to save a child rapist from being tortured; to which Detective Mercure (Remy Girard) – who is himself dealing with the loss of his wife who was shot by a robber - responds by claiming it’s not Lemaire he wants to save. 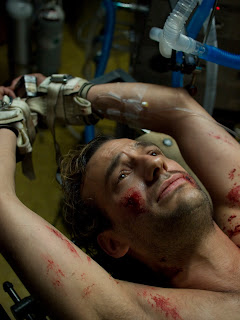 When does vigilantism and the need for justice become revenge? Is it ever justified? What exceptions are there? These are but a couple of the ideas addressed throughout the story – no easy answers, if any, are provided and events are filmed in a very detached and clinical way. To call 7 Days a provocative and challenging film would be an understatement – there is far more simmering beneath the austere surface than initially obvious. There does come a point though when Hamel’s actions seem more calculating than those of a man simply wrecked with grief. The initial rage and pain has subsided and he approaches his revenge methodically. A brief exchange with a young cashier at the local gas station reveals that some people in the area have recognised who he is – but have not reported him to the police. Is this complacency, or the fact that society shares a collective ‘understanding’ of his need for ‘justice?’ The urge to lash out when attacked and the desire for revenge is a primal one. Is it intrinsically human? What would we do in this situation? Questions, questions, questions. Despite the films detached approach, 7 Days is not a ‘background’ film to be put on and tuned out to. It engages and provokes and above all, provides meaty food for thought.

The counter argument – that regardless of Lemaire’s crimes, he still deserves to be treated fairly and his fate should be decided by the law, not vigilantism - is touched on with the introduction of the mother of one of Lemaire’s prior victims. She has been attempting to move on with her life and condemns Hamel’s actions. What happens next further separates the audience from Hamel (were we supposed to be siding with him anyway?) and his cause as his actions are clearly no longer those of a man on a personal vendetta – he seems to be cracking; his initial hardcore belief in what he was doing now seems to be in need of validation: his wife has long turned her back on him and the police seem to be closing in. 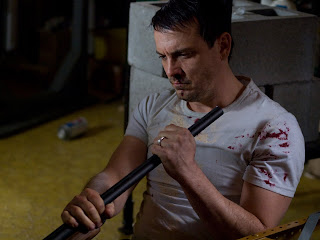 Ultimately there is no glory, no relief, no cathartic moment in which Hamel’s need for vengeance feels sated. It is easy to see why this film has drawn comparisons to the work of Haneke – it is brutal, intellectual and challenging, and its lack of any easy answers at times has as much of an impact as its scenes of pain and suffering. Hamel realises that his actions have been selfish, and more importantly, pointless. His daughter is still dead. The fact that the film lacks a big climax ensures that the events depicted within it will haunt the mind long after. The moral melting-pot has been taken off the boil, but still simmers quietly.

Michele (TheGirlWhoLovesHorror) said…
The age-old question of revenge and vigilantism - morally right or wrong? This sounds like a great film. Will definitely be checking it out. Wonderful review!
20 September 2010 at 02:43

Michele (TheGirlWhoLovesHorror) said…
I watched this the other day and am working on a review for it now. Excellent movie and beautifully shot.
Although I don't know about the comparison to Haneke. Funny Games only seemed to look at the audience as the bad guy. Seven Days I thought had a much different approach and message.
2 October 2010 at 04:02

James Gracey said…
So you got a chance to check it out? Good stuff. Yeah, I'm not so sure about comparisons to Haneke either - I can see why they've mentioned his name, but I think his material takes a much more intellectual approach to similar subject matter. Not to say that this film didn't, but Haneke seems more philosophical and he engages with the audience on a cerebral level about why they choose to watch such films.
4 October 2010 at 22:11

Rob J said…
A truly magnificent movie which should have reached a bigger audience, but its' unsettling subject matter would have scared off many people. Like all the best
films, it provokes more questions
than answers. At the heart of it, is the fact what grief can do to people under terrible circumstances. There is no neat
resolution in this movie. Some of
the responses on Amazon are laughable. All I can say, many people left school without being able to read.

There is a saying :- "When seeking revenge, dig two graves. One for yourself." How true.