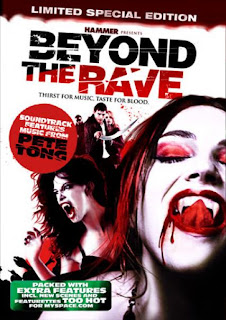 With the help of his ragtag group of friends, young squaddie Ed must find and win back his girlfriend Jen from the clutches of a mysterious group of hardcore ravers before he flies to Iraq. When he eventually catches up with her at an all-night rave party in the English countryside, Ed discovers that the weird ravers who are hosting the event, are looking for more than a night of fun and not everyone will make it through to see the light of dawn…

Essentially taking a concept that was touched on very briefly at the beginning of the first Blade movie (a vampire organised rave that turned into a bloodbath as the toothy ones begin to feed on the blood of the revellers), Beyond the Rave was originally an online serial aimed at the iPod generation. Those expecting to see something more ‘traditional’ from Hammer might be disappointed – though the studio must be applauded for its innovation and efforts to engage with savvy 21st century audiences. Made in conjunction with Channel 4 and myspace.com films, Beyond the Rave is a feisty vampire flick for the Skins generation and continues the latest trend of vamps as hedonistic party animals.

The episodic approach, while probably much more effective if one had been watching the series as it went out online, works against it on DVD, as it is distracting and often lifts the viewer out of the film. Each ‘episode’ has its own souped-up title card and climax, which results in rather uneven pacing until the ‘third act,’ when the tension begins to build and the story at last feels as though it has found its direction and is building towards a climax. An abundance of characters, while great for a serial, also distracts in this ‘film’ cut – too many of them aren’t given much to do, except show up at the rave and fall victim to various vampires – only the core group receive any sort of characterisation. The young cast all slot easily into their roles, and several really stand out, particularly Nora Jane Noone (The Descent) as straight-talking Jen, and Lois Winstone as lovelorn vamp Lilith. Crafty cameos from the likes of Ingrid Pitt and Sadie Frost are a welcome surprise too, particularly in their subtlety. 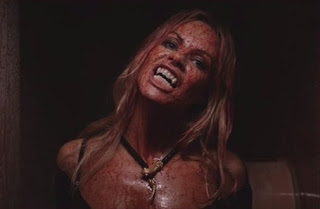 Technically speaking, the film really punches above its weight – obviously working on limited resources and low budget, it retains a slick and glossy feel that belies its humble production values. The rave scenes in particular are atmospheric and effectively realised, particularly the rather surreal scene in which a vampire aerial artist lowers herself from the ceiling, spider-like, to claim a victim from the loved-up crowd below. At times there are hints of something charmingly old fashioned that doesn’t quite sit well amongst all of the contemporary trimmings; a number of visual throwbacks occur in various forest-based scenes, and real menace is sustained in the scenes featuring a much older vampire who stalks the teens in the woods; but overall the vintage feel is obliterated amidst the blasting techno beats (selected by dance-music maestro, Pete Tong, innit) and streetwise lingo. 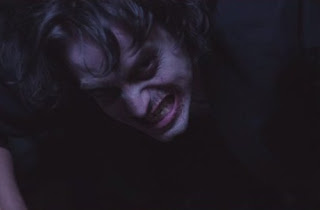 When Jen encounters Melech on the dance floor, the blaring techno fades and as he sees how much she resembles his long lost love, mournful strings sweep over the soundtrack as they lock eyes and begin to dance. Shortly after, a line of dialogue spoken by Melech, as he explains the risks of organising and marketing an underground rave, seems to speak directly of Hammer’s own situation, as it tries to claw its way back to the prominence it once held in the film industry throughout the Seventies, and the subsequent expectations audiences have built up throughout the years of its absence. “There’s a tightrope to walk when you’re getting the word out to Joe Public. Bang the drum too early and the world and its wife will appear; but leave it too late, and you’ll find yourself dancing around your handbag all on your own, wondering if you might be getting a little long in the tooth for these sorts of shenanigans.”

The inclusion of a character who is about to be shipped off to fight in Iraq is interesting, though the parallels drawn between war and vampirism feel heavy-handed. Other contemporary social issues such as immigration are touched on in the epilogue, which briefly follows the exploits of a character who became a vampire at the climax of the film. He and his new ‘family' of vampires must stow away onboard a ship, dodging port authorities to ensure their dreams of a new life elsewhere (an island off the coast of Africa is revealed to be where the vampires of the world dwell – leaving only when ‘supplies’ are low) won’t be quashed. A number of parallels are also drawn between vampirism and drug-addiction, but not in the in-your-face-way you might expect. 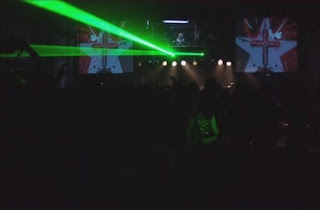 Beyond the Rave is fun and has its fair share of effective moments, but it is not the sum of its many parts, and it really would have benefitted from a re-edit for DVD release. Those expecting it to herald Hammer’s long awaited comeback may be disappointed and should probably look to the forthcoming Let Me In to fill that particular expectation…