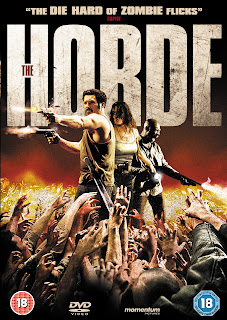 When a high-ranking and well-respected police detective is found murdered by a gang of homicidal mobsters, a small group of his closest colleagues on the force take it upon themselves to avenge his death vigilante-style. Heavily armed and determined to see justice done, they manage to infiltrate the upper floors of the suburban high-rise apartment block that serves as the criminals’ hideout. But during the raid things go wrong and the cops find themselves overcome by the gang, who take them prisoner and begin to torture them.

Meanwhile, on ground level, the gang’s lookout men become aware of a strange disturbance in the streets immediately surrounding the building, with the sounds of explosions and sirens filling the air. Incredibly, it becomes apparent that the commotion is being caused by ever-growing crowds of crazed people with a hunger for human flesh. It’s not long before the gang of criminals and their captive cops realize they are trapped together on the top floor of an unfortified building that is becoming rapidly infested with blood-thirsty legions of the living dead. Their only chance of making it to ground level and getting out of the situation alive is to join forces, but with their numbers dwindling and each side having a score to settle, the odds of survival really don’t look good for anyone with a pulse… 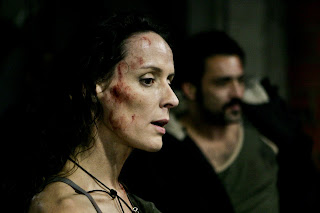 The Horde has been described as Assault On Precinct 13 meets Dawn Of The Dead and is the latest addition to the ever-rising wave of extreme French horror cinema. For a country apparently prone to turn its nose up in disdain at the horror genre, it sure as hell has been producing memorable, disturbing, graphic and truly hardcore horror films for the past several years now. Haute Tension is widely regarded as being responsible for kicking of this latest craze, and the likes of Inside, Martyrs, The Pack, Ils, Calvaire and Frontiers followed in hot pursuit; each one more extreme than the last. Winner of the International Fantasy Film Awards for Best Screenplay and Best Cinematography at the 2010 Fantasporto International Film Festival, The Horde is a must-see for zombie movie fans, not least because it features scenes of genuine, edge-of-seat tension, insanely violent hand to hand combat between humans and zombies (certainly something you don’t see in most zombie flicks – and must be seen here to be believed!) but because it also takes an exceedingly fresh approach to a by now very familiar genre. 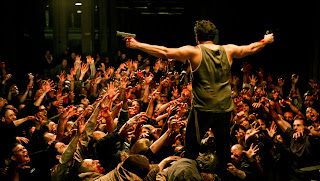 As with most other entries in the ‘under siege’ sub-genre, the disparate group of individuals in The Horde must put aside their differences and attempt to work together to survive. Obviously this course of action is not without its difficulties, the two groups involved belonging on opposite sides of the law – but with more in common than they’d care to admit. The characters featured here are more fleshed out than your average zombie fodder and the constantly shifting group dynamics share centre-stage with the original concept of pitting tough cops against badass criminals in a zombie-infested apocalypse. Before long, the group begins to turn against each other and the threats they encounter are from within, as well as from the zombie hordes attempting to gain entry to the building. With such initially ‘unsympathetic’ characters populating the story, the way in which the writers’ gradually flesh them out and make them more sympathetic is quite disarming.

The film also boasts a wily sense of humour - plus more than its fair share of deliberately cheesy one-liners - to counter the bleak violence and audacious situations the characters find themselves in. The ‘zombies’ in The Horde stem from Danny Boyle’s running/infected beings, though they too are shown in an oddly sympathetic light, particularly in the scene where several of the criminals overpower a female zombie, torment her and even discuss raping her as she flails mindlessly on the floor; teeth gnashing, limbs contorting. No reason is given for what causes the dead to rise/living to be infected; the audience are thrust into the ensuing bloody chaos as much as the characters are as events shoot along at break-neck speed. 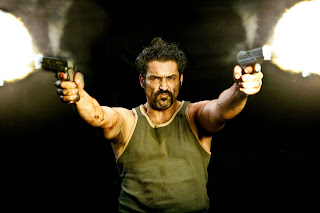 While The Horde doesn’t necessarily show us something we haven’t already seen before, it still presents us with a stylish, high-octane, insanely violent, darkly funny and supremely entertaining thriller, nonetheless. And it also boasts one of the most compelling and memorable kick-ass heroines in recent memory - Aurore (Claude Perron) makes Ellen Ripley look like Maddy from Friday the 13th: The New Blood.

Shaft said…
I'm not a hardcore horror fan, but if 'The Horde' is indeed "stylish, high-octane, insanely violent, darkly funny" it's right up my alley. I'm definitely going to see this.

James Gracey said…
I'm sure you'll love it! Its a lot of fun. The distributors are actually marketing it more as an action film - though truth be told, it incorporates elements of horror and action. Riveting stuff, really.
21 September 2010 at 10:37

Aaron said…
Nice little write-up, fella! I can't wait to see this one, James. I'm not a big fan of zombie movies (I wish they would just go away already), but I do love me some French horror films. I have to admit, though, that the PRECINCT 13 meets DAWN comparison is extremely high praise, so this movie better deliver the goods. If not, I'm blaming it on you, James.

James Gracey said…
Cheers, Aaron - I reckon you'll like it. And I shall begrudgingly accept full responsibility if you don't!
My French kinda sucks, but I think the 'H' in Horde, would mostly be silent, yes. Probably. ;o)
26 September 2010 at 12:12