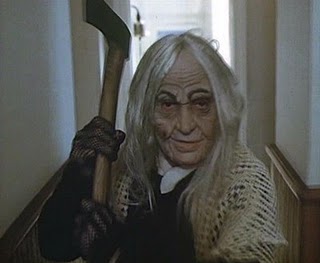 Provocative, grim, shocking and extremely anti-establishment in their outlook, British director Pete Walker’s “terror” films were always controversial—perhaps due to their frequent representation of an unsavory, seedy underbelly of a British society governed by hypocrisy.

With his previous movies, notably House of Whipcord, Frightmare and House of Mortal Sin (a.k.a. The Confessional), Walker had actively worked to subvert typically British institutions (such as class, family and the legal system) and outrage as many people as he possibly could by presenting cannibalistic pensioners, murderous priests and private prisons controlled by sadistic wardens.

1978’s The Comeback (a.k.a. The Day The Screaming Stopped), however, unfolds as a somewhat more conventional offering, and was seen as a deliberate move to reach a more mainstream audience.

Pax Romano said…
Is this the movie that had Jack Jones in it? I vaguely recall seeing this on cable tv back in the very early 80's ... an old couple seeing revenge on Jones or something like that.
26 September 2010 at 22:31

I Like Horror Movies said…
I have been sitting on this one in my wishlist for years, cant wait to see it and heading over to read the article now. Fangoria!!
9 October 2010 at 15:53