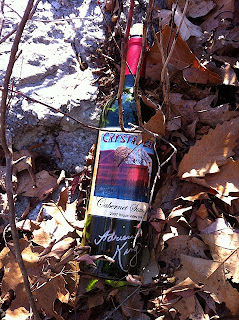 Given that this month has been dedicated to watching all the Friday the 13th movies (what was I thinking!?), I thought it most appropriate that the wine of the month to accompany my movie marathon should be none other than Crystal Lake Wine!

As a fan of horror movies, I’m quite partial to a splash of the red stuff. No, the other red stuff. As such, I’m happy to report that Crystal Lake Wine is available in the form of a rich, full-bodied Cabernet Sauvignon – described as having 'the classic cab flavours of black current, plum, herbs, and peppers, perfectly balanced with a touch of vanilla oak and moderately firm tannins.' Crystal Lake Wine also produces a beauteous Chardonnay (if that just happens to be your bag), 'loaded with flavours of pear, pineapple, and has a wonderful crisp finish. This is a perfect wine for your summer picnic!' Or lakeside summer camp massacre. Your call.

Crystal Lake Wine is produced and bottled by one of the oldest wineries in Southern Oregon, Valley View Winery. Located near the historic town of Jacksonville, in the Rogue Valley of Southern Oregon, Valley View was originally established by pioneer Peter Britt in the 1850’s. The winery ended with Britt’s death in 1906 but the name was restored in 1972 by the Wisnovsky family, whose vineyard and winery is located just nine miles from Jacksonville in Applegate Valley. The Applegate and Rogue Valleys offer a large variety of soil types and microclimates that allow a great diversity of grape varieties to be grown. Because the Applegate Valley is considerably sunnier, warmer and drier than elsewhere in western Oregon, Valley View concentrates on Cabernet Sauvignon, Merlot, Viognier, Syrah and Tempranillo at their estate vineyard. The artwork adorning the labels was created by none other than Adrienne King – Alice from the original movie! 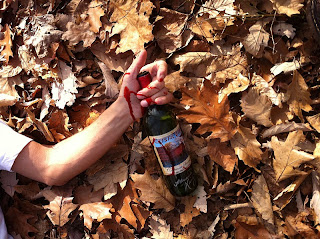 The images on this post (with the exception of the wine labels) are courtesy of filmmakers Curtis and Dallas of DCWorldHome, and are stills taken from a commercial they’ve just filmed for the wine, along with director Victor Bonacore of Chainsaw Kiss Productions, and Adrienne King. The commercial will take the form of ‘lost footage’ from the original movie and involves a lost counsellor, wine, Jason and much blood shed! They are in the midst of post-production, but keep an eye on their site where the finished trailer will be available to watch soon!
Crystal Lake Wine Wine of the Month