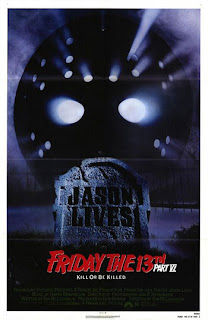 Not content that mass murderer Jason Voorhees is actually dead; Tommy Jarvis exhumes the brutish serial killer’s coffin and impales the body with a metal spike. Moments later a bolt of lightning strikes the spike, jolting life into Jason’s corpse, which rises and sets off on another killing spree at Camp Crystal Lake. Naturally. Can Tommy convince the authorities that he’s not crazy and that Jason stalks the area again? Well, it’s a mid-Eighties’ slasher flick, so what do you reckon??

Director Tom McLoughlin sticks to the basic rules of the series, but he slyly injects much needed humour into proceedings, without ever tumbling into out and out parody. The humour is evident from the opening titles; Jason adopts the role of 007, strutting into the centre of the screen and chucking his machete right at us – blood flows down the screen to reveal the titles. Much like Part V’s underrated opening scene, this instalment also begins in atmospheric and irresistibly Gothic fashion; with two friends digging up the grave of Jason Voorhees. Wind howls, thunder rumbles and lighting strikes, et voila: Jason’s lifeless body is reanimated Frankenstein’s Monster stylee, and he has now become the iconic unstoppable killing machine/force of destruction fans know and love. What does he do with this new found immortality? Why he takes it right back to Camp Crystal Lake where all these slashing shenanigans began, of course! Only thing is, in order to distance itself from its bloody history, it’s been re-dubbed Camp Forest Green… 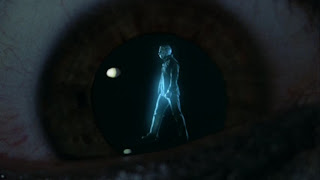 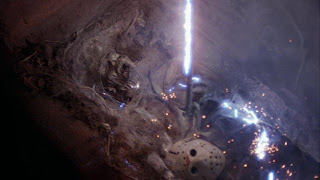 “You mean the Jason of Camp Blood?”

The other characters that populate this new look Crystal Lake, sorry, Forest Green are all likable enough. We have a new batch of counsellors, a group of young kids staying at the camp (a first in the series!), a quick-witted, fast-talkin’ sheriff and his plucky daughter Megan (Jennifer Cooke) and the usual plethora of redundants who are here simply to up the body count; including the drunken caretaker of the graveyard (who is Irish, so therefore must sing about 'Kathleen' and talk to his bottle of whiskey), a young couple celebrating their engagement, and a troupe of business execs on a paintballing/team-building excursion. The violence in this seems more OTT too – limbs are lobbed off, bodies are bent backwards, heads are crushed into walls, throats are slashed, stabbed, throttled, beheaded and in the case of poor Paula (Kerry Noonan), one of the camp counsellors, so eviscerated (off screen) by Jason’s machete, little of her remains except her blood. This of course saturates the walls of her cabin. One fairly tense and creepy scene, again involving Paula, occurs when she goes to sooth the distraught homesick kids who are claiming to have nightmares about a scary man. As she makes her way back through of the cabin, Jason can be glimpsed through the windows following her from outside. While more care seems to have been lavished upon the script, this film also seems to have had a bigger budget than its prior instalments – as illustrated in the scene with the explosive crash of the Winnebago, and the Alice Cooper songs on the soundtrack. Rock! 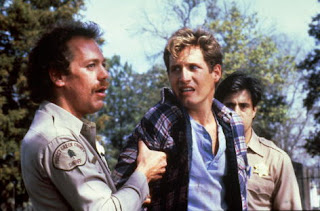 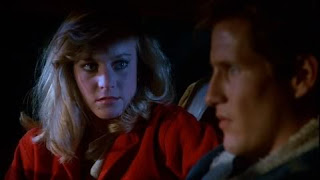 As Tommy Jarvis, Thom Mathews is very likable, charming even, though his performance (naturally) is very different from that of John Shepherd, who starred as the troubled character is Part V. Again, the character’s presence lends the film a relatable anchor amidst the carnage of countless counsellors and sexed-up teens. This Jarvis though seems a lot less on the edge of insanity than the last incarnation – something else that in hindsight further sets Part V apart from the pack: it had the nerve to make its protagonist someone with PTSD. It just never did anything with him, though. 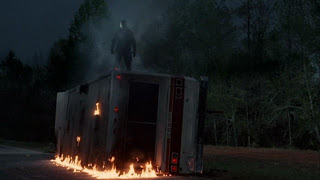 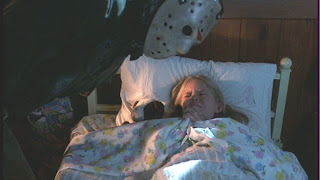 Jason Lives is strewn with visual gags, particularly with regard to the killings; for example when Jason rams a metal peg into the middle of a cop’s forehead, we immediately cut to a shot of a dartboard. Hah hah. While slashers are often referred to as ‘stalk and slash’ movies, the Friday the 13th series progressively moved away from the ‘stalking’ aspect, and just went straight for the slash. Characters wander around, usually alone; oblivious to the danger they’re in. They hear a noise. They stop, look around. When they turn back again, Jason is standing there waiting to stick something sharp into them. In other words, while much fun is still to be had watching these flicks, any semblance of tension has completely gone. Even the climactic chase scenes the likes of which featured in earlier instalments (notably Parts II and IV) have abated. 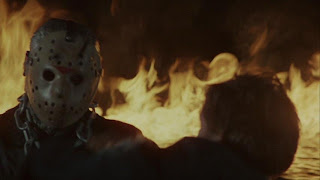 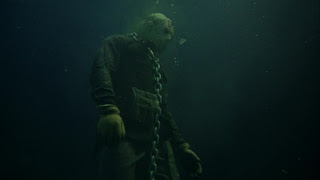 What Jason Lives does offer though, is a dash of the aforementioned sly humour – most evident in the dialogue. A particularly delicious self-reflexive moment occurs when two counsellors, trying to locate the new camp, have taken a wrong turn down a dirt road in the forest. They suddenly stop the car when they see Jason blocking the road ahead. The woman (Nancy McLoughlin) exclaims “I've seen enough horror movies to know any weirdo wearing a mask is never friendly.” Bloody mayhem ensues. Another slyly humorous moment occurs when Martin the Irish grave-digger, discovers Jason's grave has been dug up and exclaims "Some folks sure got a strange idea of entertainment," before wryly looking at the camera. And us.

deadlydolls said…
I know this is probably one of the best entries in the series, but it doesn't do much for me. As a kid, I lost any fear of Jason when I realized he wasn't going to kill the kids. Bah humbug!
8 December 2010 at 15:20

James Gracey said…
Yeah, its all fairly tame stuff, Emily. Still much fun though! I don't reckon Paramount would've been too happy about the pitter-patter of tiny, mutilated/dead feet... ;)
8 December 2010 at 15:39