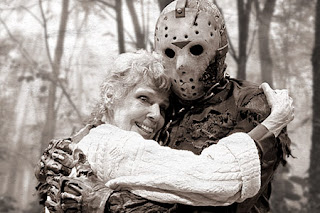 "Jason shoulda been watched! Every minute!!" So that's what I intend to do...

This December is Friday the 13th Month at Behind the Couch. I've decided its high time I watched all twelve movies (including Freddy vs. Jason and the 2009 remake) in fairly quick succession. Hey, these things just have to be done sometimes. Makes one feel alive! Or just brain-dead. I'll let you know which by the end of the month.

Friday the 13th is one of the most successful and long-running series in horror history – its central antagonist Jason Voorhees has become one of the genre’s most recognisable icons. Love it or loathe it, there’s no denying the impact the series has had on horror cinema.

So, join me if you will and let’s embark on a sordid, bloody trek back to Camp Crystal Lake, maybe indulge in a little pot and premarital sex. There’ll be wine, of course, and the overwhelming urge to check out strange noises, alone, in dark forests and creepy basements.

Chad? Is that you, Chad? Come on you guys. This isn’t funny anymore. Quit screwin’ around…

Jenn said…
This sounds like fun. My favorite is is JASON GOES TO HELL (I'm serious). I want to open a restaurant just so I can have a dish called a Vorhees burger with a side of Jason fingers.

My ringtone is the theme from F13th, as performed by Kronos Quartet. It's as frightening as it is fun. Especially when you're not expecting the phone to ring and it does and it scares you. Sam's ringtone when he calls me is the ki, ki, ki noise, which is barely audible as a ringtone, but still fun.

I don't know why I told you all that. But I hope I got some cool points :P

James Gracey said…
Hey Jenn, you know what? I also really like Jason Goes to Hell. I enjoyed the fresh approach and dark humour.

Michele (TheGirlWhoLovesHorror) said…
I watched all the Friday films in succession myself not too long ago. It was for sure many hours of brain dead fun.

You know which one I really like? Friday 5. I KNOW. Jason's not even the killer there but for some reason I've always enjoyed the wackiness of that film.
4 December 2010 at 02:29

James Gracey said…
Believe it or not, you're the second person tonight to tell me you like Part V! I think it's my least favourite though, but I still enjoy it, obviously. In my opinion, it and Part III, are the weakest enties, though they both have elements that I really like.