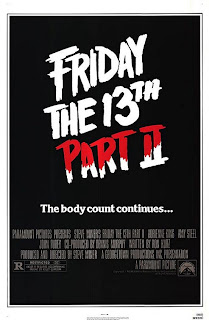 Five years after Mrs Voorhees slaughtered a group of counsellors attempting to reopen the summer camp where she believed her son to have drowned, a new spate of murders plagues a nearby camp. Could it be that Mrs Voorhees’ son Jason has returned from the grave to avenge his mother’s death? Or could it be he didn’t actually drown all those years ago, he lived as a feral hermit in the woods by the lake… Until now!

Jason Voorhees was essentially an afterthought as far as the first Friday the 13th movie was concerned. His off screen death provided the catalyst for his mother’s vengeful killing spree. That was of course until the film became a huge success and Paramount saw a way to make even more money, as cheaply as possible.
Stepping away from the project to pursue more ‘family orientated’ projects, Sean Cunningham handed the reins over to producer Steve Miner. 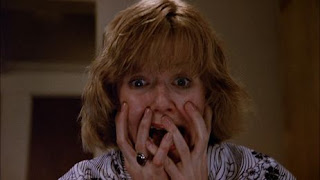 Friday the 13th Part II was released at a time when cinemas, and indeed video shops, were staggering under the weight of slasher movies. From the years 1980 – 1982, you couldn’t go near a cinema without the risk of bumping into a masked psycho brandishing something sharp and stabby. Also produced around this time were the likes of Halloween II, Prom Night, Terror Train, Hell Night, My Bloody Valentine, The Burning, He Knows You’re Alone and The Funhouse – all of which featured unfortunate teens making out and then getting murderlised. Friday the 13th Part II is in many ways now typical of the standard slasher sequel. Revenge is once again the motive of a largely unseen assailant. The body count is much higher than that of the prior film. The deaths are much more elaborate and gory. There is more nudity, more partying, more people wandering around creepy woodlands in the dead of night only to meet with the wrong end of something sharp. Everything about Part II screams bigger, better, faster, morer! In some other ways though, Part II is, while arguably a souped-up retread of the first movie’s events, actually a well constructed and (pardon the pun) executed film. Like the first film, we follow the mundane exploits of various teens, as they obliviously shag, smoke and drink their way towards a violent death at the hands of a madman stalking their every move. Thinly drawn characters are picked off one by one, in increasingly grisly ways until only one is left standing – in this case, Final Girl par excellence, Ginny (Amy Steel). As was the case with Alice, Ginny is really the only character to receive any shading or depth – she’s a cool, intelligent, down to earth and straight-talking person who drives a cranky red car and majors in Child Psychology – something that comes in very useful when she must confront Jason at the film’s climax! 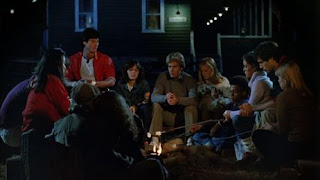 Opening with a tightly filmed prologue (all close ups and steadicam stalking) in which poor Alice (Adrienne King), two months on and still clearly traumatised by her ordeal at the hands of Mrs Voorhees at Crystal Lake, has a lengthy flashback compromised of stock footage from the first film. Wandering around her cosy apartment, she showers and is startled by a noise in her kitchen… Shortly afterwards she discovers the decomposing head of Mrs Voorhees in her fridge and is promptly dispatched by an unseen assailant who stabs her in the head with an ice pick. It isn’t long before we’re introduced to the next batch of camp counsellors, who are gathering at a summer camp near Camp Crystal Lake, five years after the events of the first movie. They tell tales of Jason and his crazy mother around a campfire, completely unaware that the fate that befell the unfortunate campers they’re discussing, is about to befall them, too. As in the first movie, these characters go about their daily chores unaware that just off-screen, someone’s watching them…
They arm-wrestle, BBQ, read, play chess, swim, have sex, drink beer, smoke pot, look for hairbrushes in dark cabins and generally just wander about the place without a care in the world while the camera stalks after them and spies on them from behind trees/curtains/fences/cabin walls etc. Miner builds a fair bit of tension during these scenes. A number of kills actually top those depicted in the first movie in terms of ruthlessness; a machete to the face, a double impalement (during sex no less!), a number of slashed throats and a hammer to the head. 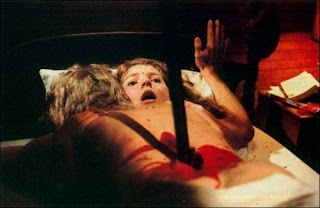 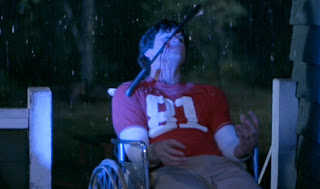 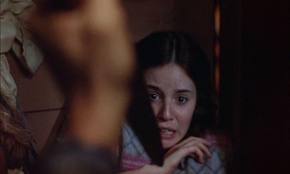 The campfire scene and a later scene involving the counsellors sitting at a bar in town discussing Jason, helps to flesh out the still fledgling slasher monster. They speculate about what he must be like, after living in the woods for so long having witnessed his mother’s death. The picture they paint of him, while vaguely sympathetic, is also incredibly sinister. In the first movie Jason was simply depicted as a disfigured boy thrashing around in the middle of the lake. In Part II, he’s lean, mean and a well-oiled killing machine. Unlike his later incarnations, here he runs and chases his prey with gusto, appearing feral and nimble. His look – a burlap sack with one eyehole cut into it, is immensely creepy, and while nowhere near as iconic as the hockey mask, still packs a visual punch – especially in the scene where he suddenly sits up in the bed to surprise poor Vicky, the camera fixed on his one glowering eye, glaring out from the hole in the sack. The stuff of nightmares. As is the moment when Ginny, upon entering a dark room with Paul, realises something is not quite right and whispers "There's someone in this room." Spine-chilling. 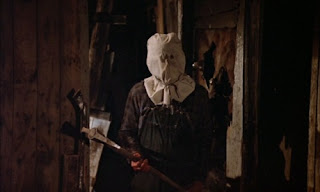 While much of Miner’s style follows directly on from Cunningham’s (the sense of continuity in this film, in terms of style and tone, is spot on), he is much more adept at building and sustaining suspense. The lengthy chase scene near the climax that begins when Ginny and Paul return from the bar in town to discover the place eerily deserted, and that culminates in Jason’s shack once he’s relentlessly pursued Ginny there, is a genuine exercise in flawlessly maintained tension and a few well timed jolts. Slasher movie bliss. In what can only be presumed to be a touch of reflexivity on Miner’s part, a couple of characters actually look directly into the camera at certain stages – Alice, when she suddenly pulls back her shower curtain, and Terry, when she is fumbling around her cabin looking for a knife. These moments are odd and uncomfortable and are almost certainly bound up in ideas about audience voyeurism, spectatorship and implement us in the ensuing carnage. It is after all, for our entertainment. A couple of stand out moments from the original are 'reproduced' here (and indeed throughout the series) such as the shock ending (which here, doesn't really make any sense, but still manages to shit you up real good). There's also the downright bizarre shot of Jason lifting Alice's kettle off the boil after he's killed her (!). 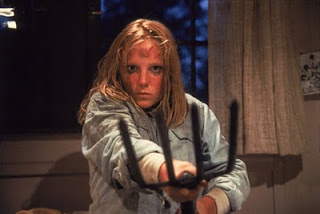 Wings1295 said…
Agree with you, once again. Steel is one of the best horror "final girls" ever, on par with Curtis, IMO.

And yeah, some good scares here. Glad you mentioned the scene in the dark room with Ginny sensing they aren't alone. VERY CREEPY!
4 December 2010 at 00:44

Aaron said…
James, was it you that left a comment on my old Friday the 13th Part 2 review that pointed out Jason having the decency to turn the stove off after he killed Alice?

Anyway, this is one of my favorite slasher movies of all time, and the film that I've watched the most in the franchise. It's a solid fucking movie with very underrated cinematography. Good stuff!
4 December 2010 at 04:14

James Gracey said…
That rings a bell Aaron! Part II has fast become one of my fave's in the series too. To be honest, each one contains at least a couple of elements I quite enjoy (even Parts III and V, my least faves).

Agreed - the cinematography is pretty damn tasty in Part II - I reckon it flows effortlessy from the look and feel of the first film.
4 December 2010 at 11:56