Dead Hooker In A Trunk 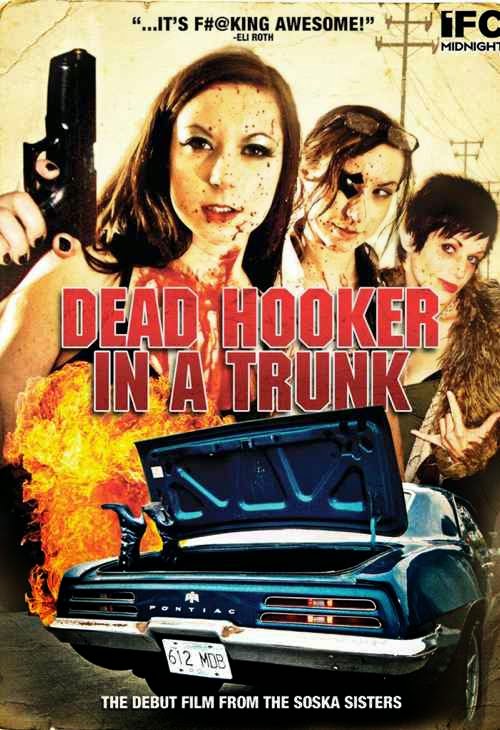 Four friends set out on an errand and end up in a fight for their lives when they discover the body of a dead hooker in the trunk of their car. The ragtag group must put aside their differences to dispose of the body and evade attempts on their lives by shadowy underworld figures, corrupt police, a sleazy motel manager, chainsaw wielding triads, and a brutal serial killer.

Energetic, oddball and effortlessly cool, the tantalizingly titled Dead Hooker In A Trunk is one of a few current films boasting impossibly exploitative titles that hark back to sleazy grindhouse flicks of the past. But can it live up to the promise of that title? Unfolding as a love letter to exploitation movies, the feature debut from Canadian twin sisters Jen and Sylvia Soska is an anarchic and eccentric road movie that subverts expectations and doesn’t stop for breath until its surprisingly poignant ending. That it has an unexpectedly big heart, and is a statement about the dynamics and importance of friendship and sisterhood; is just an added bonus. A real livewire buzz elevates it above and beyond your usual low budget indie fare. There is a sense when watching it that it’s somehow part of a 'bigger picture.' I think in hindsight that 'bigger picture' will reveal itself to be the career of the Soska sisters. If this debut is anything to go by, they will be big.

Shot on digital, the style of the film really varies. Much of it is handheld and sparks with a real kinetic vibrancy. Certain scenes possess an almost lyrical quality, particularly the likes of the beautifully filmed campfire scene, complete with sunspots and dapples of morning light on the lens, giving the scene a bittersweet intimacy. The delicacy of moments like this contrast strongly with scenes such as the one depicting the hooker’s demise, which is disarmingly brutal, beautifully orchestrated and dizzily intense.

While at times the narrative doesn’t seem to have a clear direction, Dead Hooker is never dull. Far from it, in fact. It unfolds as an almost picaresque series of vignettes; the raw energy and drive onscreen is infectious, and while the story may meander down unexpected and ever-loosely connected thoroughfares, it still grips and enthrals. It is essentially a microcosm of the road movie; while the physical journey doesn’t take the gang very far, the journey and development they undergo as characters is significant. The bizarre situations they find themselves in, though never questioning - such as an encounter with a necrophiliac motel owner, or being lassoed by a pimp on horseback (!) - serve to lend the film an off-the-wall execution, almost akin to magic realism. When one of the gang has her eyeball knocked out and another, her arm wrenched off by a passing truck, things just carry on as normal! Well, as normal as things can be in a film called Dead Hooker In A Trunk.

It would be easy to dismiss this as deliberately trying to be cool, but as the story progresses, we become more enamoured with the characters as attention is lavished upon allowing them to develop and breathe enough so that we enjoy their company all the more. As the story continues to open out, it soon becomes clear there is more going on here than just riffing on exploitation glories from the past. While not perfect, it has such an offbeat sense of fun and self-belief; it’s hard not to let yourself get caught up in its whirlwind.

The tone never settles with the story’s mixed bag of events resulting in extreme violence, high octane action, tender romance, black comedy and flashes of horror. It can shift from splatter movie disembowelments, to soul-searching poeticism to frenzied attacks, to comedy as black as a smoker’s lungs, in mere moments. There are some pretty outré moments, including a chainsaw attack and torture scene complete with tooth extraction and power drills, and the anarchic, at times madcap feel may perturb some viewers as much as it enthrals others. In lesser films this could be a major discrepancy, but with Dead Hooker it doesn’t jar too much; it almost dares the viewer to adopt the same ‘devil may care’, take-it-as-it-comes attitude of the characters. While it falters a little in pacing and loses some of the narrative thrust it began with, the energy of the cast and the increasingly outlandish moments continue to compel things forward.

The ragtag group of characters exude misfit chic and the cast give uniformly decent performances. As Junkie, Rikki Gagne proves alluringly coquettish, while an endearing CJ Wallis (also the composer of the dreamy score) exhibits good comedic timing as Goody Two Shoes, a shy Christian youth facilitator intimidated by Geek’s sister. The real highlights of the film however are the Soska sisters. The twins are compelling and light up the screen as Geek and BadAss/The Cunt. They don’t so much command attention, as seize it by the balls. And then bat their lashes at it. Writing, directing, producing, starring and providing some of the stunt work, the sisters have really proved that they are a force to be reckoned with here.

Dead Hooker In A Trunk is an explosive debut that showcases their talent and promise, and will hopefully be the first feature in a career full of bolshie, raucous, daring and unique film work.
Comedy Horror Exploitation Indie Film Jen and Sylvia Soska Low Budget Splat-Stick Twisted Twins