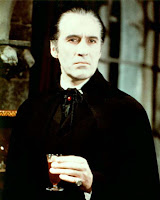 Sir Christopher Frank Carandini Lee, CBE, CStJ – who turns 89 today - really needs no introduction. Born in 1922, he is well known for his portrayal of various exquisite villain-types throughout the years, particularly Count Dracula in the fabulously gothic Hammer Horror films of the 60s and 70s. Despite having performed in over 266 films since 1948 – a fact which gains him an entry in the Guinness Book of World Records for having the most film acting roles ever – one of the films he is most proud of is Robin Hardy’s pagan folk horror, The Wicker Man (1973). Lee plays Lord Summerisle, the leader of a small pagan community not averse to ritualistically sacrificing virgin coppers from the mainland in order to help their failing crops.

Lee was knighted in 2009 and received the BAFTA Fellowship in 2011. Some of his more recent film work includes Hammer’s latest excursion into dark matters The Resident, medieval action-horror Season of the Witch, body-snatching horror-comedy Burke and Hare and Robin Hardy’s long awaited follow up to The Wicker Man, The Wicker Tree.