Faust: Love of the Damned 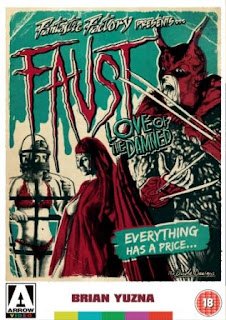 When John Jaspers’ girlfriend is brutally murdered by a gang of thugs he loses the will to live and plans to kill himself by jumping off a bridge. Just before he jumps he is approached by the sinister "M" who offers a dubious proposition: he will enable Jaspers to wreck brutal revenge in return for the man’s soul. Jaspers accepts and is transformed into Faust, a demon-like superhero who embarks on a bloody trail of vigilante vengeance… However when “M” returns to claim Jaspers’ soul, all hell breaks loose when Faust refuses to stick to the bargain.

“I am the pornography that makes you hot!”

Based on the graphic novel by David Quinn and Tim Vigil, Faust was the first film produced by Brian Yuzna’s Spanish production company, Fantastic Factory. Something of an oddity, the film is, if anything, an interesting attempt to approach the super-hero movie from a slightly different angle. The notion of an avenging demon is a tantalising one akin to the likes of The Crow or Spawn. 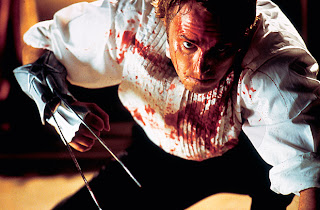 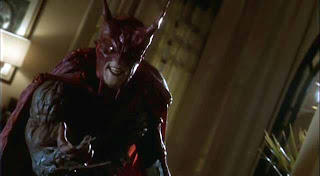 The 'Faust: Love of the Damned' graphic novels had a reputation for containing some of the most out there sexual and horror content of anything in the graphic novel market. As the man responsible for the likes of Society, Brian Yuzna would seem the perfect candidate to helm such a potentially extreme project. Its easy to tell this was based on a comic book, some of the shots, including one of the earliest ones featuring Jaspers standing on the bridge in Faust form, are obviously going for the ‘iconic’ look, however rather than continue with this approach, Yuzna soon opts to just load the film with soft-core nudity and weird S&M imagery depicting the pleasures of the damned.

Indeed, while a bizarre Clive Barker-esque S&M saturated palette dominates the film (sorry), unlike Barker’s hellishly tortured-erotica, Faust doesn’t have the intellectual musings to accompany such disturbing sights. The result usually resembles a cheap and obvious soft-core flick. As well as copious nudity, the film is awash with blood and gore courtesy of Yuzna regular, effects master Screaming Mad George, and much of the violence sits at odds with the cartoon humour. At times Faust comes on too much like a low-rate Freddy Krueger, spouting cheesy oneliners and punds while dispatching victims. One particularly bizarre and outré moment briefly recalls some of the queasy sights from Yuzna’s much better Society. 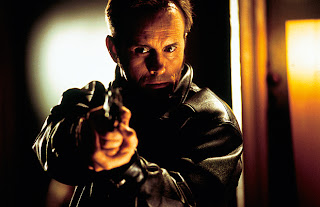 The tone is all over the place. Faust is at times depicted as a ruthless, unstoppable killer, and others, a tragically doomed figure. As John Jaspers/Faust, Mark Frost provides a wacky, bug-eyed performance resembling Jim Carrey on steroids. Twisting and gurning his face he fails to engage or convey the depths of his tortured soul. Elsewhere stable, if rudimentary support comes from the ever-reliable Jeffery Combs as good-intentioned cop Lt. Dan Margolies, and Andrew Divoff as the devilish “M.”

The Arrow Video boxset was released on 18th April 2011. It includes Faust: Love of the Damned, Romasanta: The Werewolf Hunt, Beyond Re-Animator and Arachnid. Jenn said…
I remember not being too impressed with this effort, despite my love of Yuzna films both great (Re-Animator) and terrible (Rottweiler). But that cover art! Surely this, as well as Romasanta, isn't deserving of such? Oh well.
8 May 2011 at 18:52

Jenn said…
That sounded wrong :) I adore the artwork of these releases. I was saying these are such subpar flix, why the great cover art?
9 May 2011 at 05:33

James Gracey said…
Oops. Sorry Jenn, I totally misunderstood you there. :)
Yeah, it's pretty cool artwork, isn't it!?
I thought that a Fantastic Factory boxset was an odd choice, but it's nice they've lavished so much attention on it and brought some attention to Yuzna's interesting, if not always successful work.
9 May 2011 at 10:44