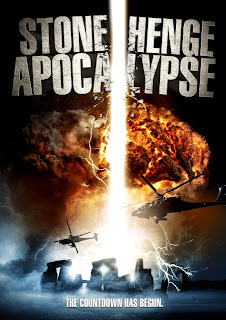 When Jacob Glaser, a disgraced award-winning scientist turned conspiracy theorist and pseudo-science radio talk show host, is alerted to unusual electromagnetic energy fields occurring throughout the globe, his initial investigations lead him to Stonehenge. Somehow, the stones have begun to move independently and are building up enough energy to vaporise humans within a certain range. Jacob’s theory is that Stonehenge is the key part of a massive alien terraforming machine connected to other historical sites around the world that are now in the process of modifying the planet for new forms of life, to the detriment of humans!

Meanwhile, in the US state of Maine, a former colleague of Jacob’s has discovered an underground pyramid linked to the ongoing events at Stonehenge and is actively working towards the destruction of mankind in the hopes that he and his followers can survive the coming apocalypse and be the rulers of the next era of life on earth. When Jacob discovers the existence of a key that he believes is capable to switching off the doomsday machine, he sets about getting his hands on it before the military can commence a series of nuclear strikes on the sites responsible for the electromagnetic emissions that have begun to signify the end of humankind!

What once created life on earth is about to wipe it out! Or something. 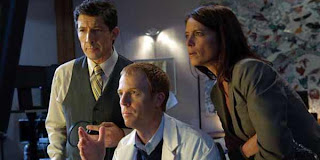 With a title like Stonehenge Apocalypse, you'd (understandably) be forgiven for thinking this could be the greatest film ever. Therefore brace yourself, for it really pains me to reveal that actualy no, it is not in fact the greatest film ever. Stonehenge Apocalypse was made for the SyFy channel and its director Ziller is well versed in low budget B-movies, having already helmed such masterworks as Solar Attack, Swarmed and Yeti: Curse of the Snow Demon. I know, I know - this still sounds like evidence that Stonehenge Apocalypse will rock your world. Unfortunately as entertaining as his work sounds, it tends to take itself quite seriously, as Ziller seemingly underestimates the power of wry humour or self-effacing irony when directing movies about killer yetis or aliens using a CGI Stonehenge to wipe out humanity. Stonehenge Apocalypse could have been the ultimate no-budget equivalent to Roland Emmerich’s overinflated and only marginally better written behemoth, 2012, but it doesn’t even come close. It doesn’t even entertain in an Asylum/'so bad its entertaining' kind of way. If I may take a moment to attempt eloquence and biting critique, it’s just very, ‘meh.’

Hinging on the premise that aliens have already been to earth, millions of years ago and left markers for future visitations, Stonehenge Apocalypse has at its core a provocative idea that’s at least intriguing. Had it been handled in an effective manner, it could have had chilling implications as the story unravelled, a la the BBC's Quatermass series (1979). Ziller’s approach doesn’t really do the idea any justice. Then again neither does the screenplay he co-wrote with Brad Abraham, as the epic feel they aim for falls short, mainly due to the underdeveloped script and low budget. The film unfolds as a series of increasingly dull scenes featuring scientists in lab coats starring intently at elaborate screensavers while spouting ever ludicrous techno-jargon. These scenes are intercut with depictions of various global landmarks, such as the pyramids and Mayan temples turning into CGI volcanoes and destroying the surrounding areas. Everything is poorly rendered in cheap, less than convincing CGI. Usually, I love this sort of thing; but Stonehenge just doesn’t deliver on any level. Even the shots of the titular landmark were all CGI. There was no actual footage of Stonehenge to be seen. Not even of the stock variety. 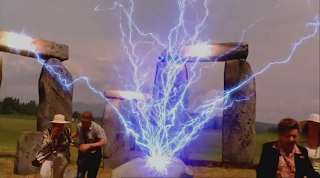 All the old hoary clichés these types of films were built on are dragged out and flung across the screen with wild abandon: the protagonist is even a disgraced scientist whose theories proved too progressive for his contemporaries so he was ostracised. There’s also a sexy lady scientist who teams up with our hero and an over zealous military general who just wants to blow shit up.

While it may sound like the best movie ever, Stonehenge Apocalypse just can’t match up to its name and unless you happen to catch it on the SyFy channel, isn’t really worth bothering to track down on DVD. If you’re that way inclined however, and hey that’s cool – I’m not judging - Stonehenge Apocalypse (cert. 15) was released on DVD (£9.99) by Anchor Bay Entertainment on 28th February 2011. Extras include: Behind the Scenes featurette and trailer.
Aliens B-Movie Explosions Low Budget Sci-Fi Technology Trashy

Aaron said…
Stone Henge Apocalypse sounds like the name of some shitty Metal band. I had pretty high hopes for this one just based on the name alone, only to find out from your review that it's not very good. Who'da thunk?!?
25 May 2011 at 12:24

Erich Kuersten said…
Thanks for taking the bullet on this one. I can now drop it from my Nflxque, confidently.
26 May 2011 at 16:43

Dame said…
The film is very bad. The scenario is a total mess. A mixture of motives from different films. Bad acting, and actions without any reason. A total waste of your time.
4 June 2011 at 13:41

Jensenfan1978 said…
Stonehenge Apocalypse is exactly what the SyFy channel wanted: a late night horror movie from the 40's and 50's. If you watch it in that frame of mind, it's fun. The actors looked like they knew what it was and had fun with it. Misha Collins is a total nutcase on a set, so I know they had fun.
5 February 2012 at 19:26